In Matthew 25, Jesus gives us three famous parables about what the end of time is going to be like—The Ten Virgins, The Talents, The Sheep and Goats—and I was asked to preach on the third of these on December 31st, the last Sunday of 2017, under the title “Sacred Doing.”  Our church often wants me to speak on topics having to do with social change and social action—partly, I suppose, because of me teaching social change and my ties to Emmanuel House—but here I took an approach different from the change-the-world message that’s usually associated with social action.

The VIDEO below presents the whole sermon, which, after the usual opening jokes and other remarks, begins looking at Matthew 25, starting with verse 31, and especially in verse 37, where “the righteous” ask when it was they ever saw God hungry, thirsty, a stranger, without clothing, sick, or in prison and reached out to satisfy the need for food, water, welcoming, and visiting. God replies with some of the most famous words in the Bible: “Truly I tell you, whatever you did for one of the least of these brothers and sisters of mine, you did for me.”

Christians often make a point of saying that what they do, they do “in God’s name,” “in Jesus’ name,” but what struck me most about the exchange above is that “the righteous” had no idea they were doing what they did in anybody’s name, least of all—it seems—that they were doing this to God or for God.  Thus, my main point:  In “sacred doing” there’s a lot of unconsciousness, a lot of unawareness of what you’re doing.  You just do.  You flow.

I wanted to explore, briefly, three aspects of “sacred doing:” practicing to do, relaxing when you do, and detaching when you do.  I turned to Dallas Willard’s list of 15 practices he writes about in The Spirit of the Disciplines to suggest what Christians—or anyone, really—might practice to get ready for “sacred doing.”  But after practice, when you’re in the game itself, so to speak, it’s most important, then, to relax.  The worst thing an athlete, a musical performer, a performer—a doer—of any kind can do is to think too much.  You’ve practiced and practiced.  Now you just need to flow.  That non-thinking flow characterizes sacred doing, it seems to me, as does the third thing I wanted to explore: detaching.  Detaching from what?  Winning, for one thing, or making that shot, getting that hit, playing that piece perfectly.  In the Chuang Tzu there’s this famous poem: “When an archer is shooting for nothing / He has all his skill. / If he shoots for a brass buckle / He is already nervous. / If he shoots for a prize of gold / He goes blind / Or sees two targets— / He is out of his mind! / His skill has not changed. But the prize / Divides him. He cares. / He thinks more of winning / Than of shooting— / And the need to win / Drains him of power.” 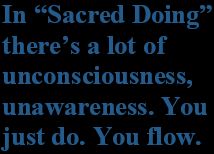 But there’s an even deeper reason to relax and just flow, and I approached this through the concept of detaching from time.  We’re creatures of time.  Things happen to us in time.  But the very notion of God suggests there’s also a realm out of time, an eternal realm where there isn’t any time.  If we’ve ever been so absorbed in something that time seems to stand still, or we’ve simply lost track of time altogether, then we’ve touched timelessness in very real ways.  From the point of view of time, we’re weak, struggling, imperfect creatures—sinful, if you will—but if we accept God, then from the point of view of eternity we’re already perfect, we’ve already arrived. That’s why, ultimately, you can detach from winning: you’ve already won.  And, ultimately, you didn’t have do anything to win. God did this for you.  In a very real sense, “sacred doing” means realizing that something outside us is doing for us.

The sermon fleshes all this out. I hope you enjoy it.

♦  OTHER SERMONS: “Pentecost Means No ‘Supremacies,'” “It’s Not What You Know But Who You Know,” “Searching for Prophets,” “Elijah: The Growth of a Prophet,” “Who Do You Stand With? A Sermon for Transfiguration Sunday,” “Three Things to Stop Saying,” “How Holy Was Jesus?” “Servants Know First,” “Everything’s OK?” “The Quiet After Easter,” “Theology and Race.”