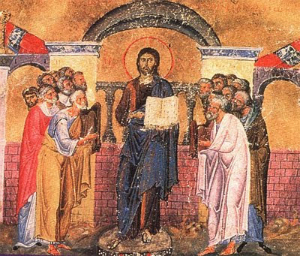 Below is a VIDEO of a sermon I preached on January 28, 2019, concerning how to listen for prophetic voices and act within the prophetic tradition by comforting and advocating for the poor, the oppressed, and the captive.  These were the people Jesus focused on as he announced, in Luke 4: 14-21, that He was that prophet for whom people had long been waiting.  It is one of Scripture’s most famous passages.  “The Spirit of the Lord is upon me,” He said, quoting the prophet Isaiah, “because he has anointed me to proclaim good news to the poor…freedom for the prisoners…recovery of sight to the blind, to set the oppressed free….”  I hope, in what follows, that the power of these words and the core of my concern will not be lost if I spend most of my time here correcting an error I made.

SERMON CORRECTION:  Near the end I quoted a statistic in error.  I said 99.6% of the benefits of the recent tax cut would go to the top 1%.  I simply grabbed the wrong note as I was rushing out the door that Sunday morning.  That figure from the non-partisan Tax Policy Center (TPC) came from an analysis of a tax proposal Speaker Paul Ryan put up during the 2016 Presidential campaign in an attempt to put specific figures to the various plans being floated by his party, especially candidate Trump.  The tax cut plan finally passed still gives the lion’s share to the top 1% of American earners, but the percentage that seems to be floating around in most analyses, liberal or conservative, is more around 82%.  Most analyses base this figure on the TPC’s analysis of the actual tax cut passed by Congress.  TPC’s analysis also shows that at the beginning of the ten-year tax cut plan, most Americans benefit, but as the years pass most Americans benefit less and less, and many in the middle-income brackets will actually see a tax increase.  This is partly because, as currently written, tax cuts for corporations are permanent, but tax cuts for

individuals are set to expire in 2027.  At the end of the tax cut plan, about 82% of the benefits will be going to the top 1%.  Conservative analysts therefore have tended to emphasize the beginning of the plan where most of us benefit—some a little, the top 1% much more—while liberal analysts have tended to emphasize the plan’s final years.  It’s possible that cuts for individuals might be renewed at the end of ten years, maybe even made permanent, but this has a significant cost.  Already the cuts explode the nation’s deficit by some $1.5 trillion, and this would only get worse if the present plan continues in anything near its present form.  You can download the TPC analysis of the tax plan—about a 33 page pdf—from the  TPC website or, what will probably be easier to follow, read analyses based on this report from a variety of sources including The Washington Post, The Wall Street Journal, Forbes, Fortune, and many others.  Just type in something like “How much of tax cut goes to top 1%” into your browsers.  Opinions vary widely, of course, some saying that the top 1% should get the lion’s share of the breaks, since they pay the lion’s share of taxes.  Others, with whom I tend to agree more, say that increasing the income and wealth gap, which the tax cut does, is finally not good for our democracy.  Neither is an exploding deficit.  Though I’ve never been a deficit hawk, the size and rate of the increase has begun to worry even me.

I regret my error, made in haste, but analysis of the tax cut was not at the heart of what I wanted to say anyway, though its effects are pertinent.  My main concern was really the increasing wealth gap in the United States and the effects this will have on the poor.  Those in poverty will need more and more of our attention in the future, as they will fall further and further behind (along with much of the lower middle class, and even some in the middle middle class).  That was the main point I wish I had made clearer.  If we can do anything to bring comfort to those who will be in these declining positions, or even help reverse the declines, we will partake in some of the prophetic duties Jesus announced in the fourth chapter of the Gospel of Luke.

♦  For more on income inequality see “Graphic Inequality” and “The Racial Wealth Gap.” The latter—and its follow up pieces “The Racial Wealth Gap and Home Ownership” and “Reparations and the Racial Wealth Gap”—touch on home ownership issues which are at the heart of groups like our “family’s” foundation Emmanuel House—which started as Bryan House and is now The Neighbor Project.  I use quotes around “family” because The Neighbor project has gone far beyond our family now.  It’s part of a national network of organizations whose work, in essence, closes the wealth gap, the racial wealth gap especially, through home ownership, the quickest way to do this in the U.S. at present.

♦  OTHER SERMONS:  “Pentecost Means No ‘Supremacies,'” “Sacred Doing,” “It’s Not What You Know But Who You Know,” “Elijah: The Growth of a Prophet,” “Who Do You Stand With: A Sermon for Transfiguration Sunday,” “Three Things to Stop Saying,” “How Holy Was Jesus?” “Servants Know First,” “Everything’s OK?” “The Quiet After Easter,” “Theology and Race.”