Is it?  Is it unhealthy to hook poetry up to an applause meter?  Is it healthier to keep it locked up in university ivory towers, like so much of it is these days?  Marc Kelly Smith was thinking about all this in the late 80’s when he virtually invented the Poetry Slam, hoping that poets performing their works before live audiences—yes, sometimes competing for the loudest applause—would return poetry to the people.  His Uptown Poetry Slam, held at the Green Mill on Lawrence and Broadway every Sunday at 7:00—has been a fixture on the Chicago arts scene and become an international phenomenon, spawning Slams all over the world.  New York poet Bob Holman calls Slams “the most active grass-roots arts movement in the country.”

I’ve never failed to have at least a great evening at the Uptown Slam, and sometimes they’ve gone beyond that to being transcendent, the poetry and the crowd’s energy lifting everyone pretty high above where language usually operates.  The picture below comes from a Chicago Tribune Magazine article by Rick Kogan.  That’s me and my wife Linda in the upper right hand corner, and, as many have pointed out, I’m the only one looking around, perhaps not really paying attention—a hard thing to do considering that the performer on stage is Regie Gibson, a national Slam Poetry champion.  Still, I too eventually got transported. 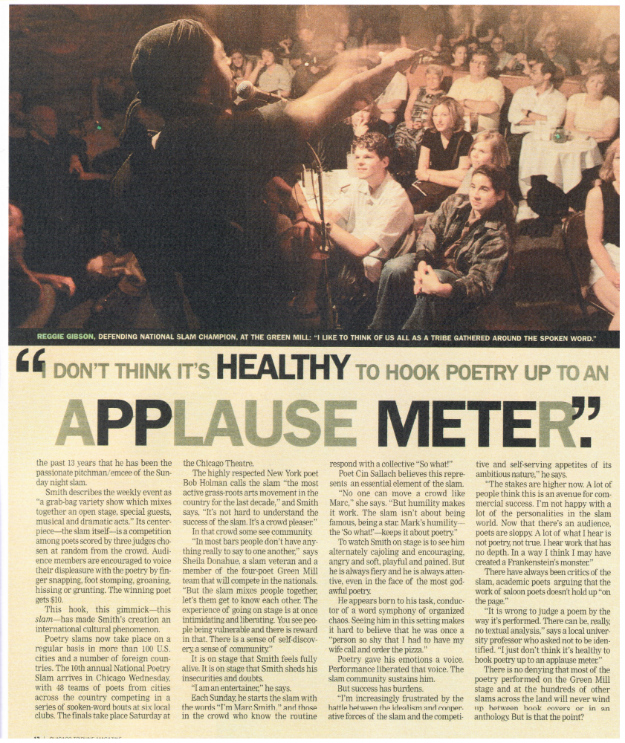 Rick Kogan calls Marc Smith a “conductor or a word symphony of organized chaos.”  The symphony always comes in three movements: The Open Mic, The Featured Act (David Starkey and I have taken a turn as one of these), The Slam competition—decided by applause, first prize: maybe ten dollars or ten lottery tickets.  “Take the cash the crowd shouts.”  And the crowd shouts at the beginning of the evening, too, in a prologue that almost always goes like this.  Marc Smith bounds on the stage and says, “Good evening, I’m Marc Smith,” at which the crowd throws back, “So what?!”  Smith rattles off the “rules” for the evening, though many of these are just what the crowd can do if they don’t like a poem: snap your fingers, stomp your feet, shout out the rhyme before the poet gets to it, or if it’s just awful, shout “Get off!”  “Then there’s the feminist hiss,” Smith says slyly.  “Used to be people would just hiss for a stupid, anti-feminist line, but now women hiss for any damn thing a man does!”  “And that’s the way it should be!” the crowd roars back.  It’s a ritual.  So is the band, which improvises music behind a poem if the poet asks for it.  “Give me something like, you know, weirdly Egyptian…and watery,” I heard one poet ask.

Smith’s rough-and-tumble Chicago style, his sarcasm, his lying in wait to make fun of a poet or poem could be intimidating.  I once did my “Why Sinatra Grows on You” and saw Smith sitting on the stage to my left.  “No, that was a good one,” he whispered to himself as I finished, sorry he couldn’t pounce.  If I don’t go to the slam as much, it’s because I can’t take it, can’t take the harassment.  “But it’s an honor to be insulted by the master!” I hear over and over, to which I always whisper, You try it.  “Guzman get up here and give us a poem, and it better be a good one!” Smith shouts.  I’m too much of a baby.  It’s true.  And I half understand poets and professors, usually with a college gig (like me) who say things like, “I don’t think it’s healthy to hook poetry up to an applause meter.”

Smith remains defiant, but has also said, “I think I may have created a Frankenstein’s monster.”  Kogan quotes Smith saying, “I’m increasingly frustrated by the battle between the idealism and cooperative forces of the slam and the competitive and self-serving appetites of its ambitious nature…I’m not happy with a lot of the personalities in the slam world.  Now that there’s an audience, poets are sloppy.  A lot of what I hear is not poetry, not true.  I hear work that has no depth.  The tension between this intense caring coupled with a devil-may-care attitude is probably the source of Smith’s power, a power that has fueled slams in Chicago and the world for nearly three decades.

♦  Read more about Marc Smith, and hear him read one of his poems Here.

♦  Read more about slam poets I included in my books Smokestacks and Skyscrapers: An Anthology of Chicago Writing (with David Starkey), and Black Writing from Chicago: In the World, Not of It?  In addition to Marc Kelly Smith, these poets include:  Regie Gibson, Ken Green, Tara Betts…

♦  Go to a list of Chicago Writers and Black Writers on this site.

This entry was posted in Chicago Writing, Poetry, Writing and tagged Black Writing from Chicago: In the World-Not of It?, Chicago's Green Mill Tavern, Marc Kelly Smith, Poetry Slams, Rick Kogan, Smokestacks and Skyscrapers: An Anthology of Chicago Writing. Bookmark the permalink.