Someone Overuses a Pager

In memory of the old, old days before smart phones.
Do pagers even exist anymore? 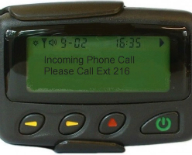 Empty, its cold comprised of stolen warmth. Or, B: The
Fear of the heart made too human by the sound of your voice,
Of words turned too honest by the breath of your voice.

Today I choose “B” and feel lucky you have a pager,
Feel lucky that everything—these sunsets, those jetting
Geese—can be digitized, rendered cool as numbers.

When you hear the beep, vibrations follow.
These half-bits traversing a screen of liquid crystal.
These emotions nearly coded, almost distant.

0000   Means I hope you find this annoyance charming.

0001   Means one of the boys may have fallen out of the
Garage loft, but probably not. Cancel this message.

0010   Everything adds up. What it adds up to is another matter,
Which is why all accountants should have minored in religion.

0100   I see you writing, gripping the pen in that funny way that
Has given you a callous on the tip of your middle finger.

1000   The center depends on the margin. Order on chaos.
Degas scribbles randomly until a ballerina appears.

1010   Every time I’m on a bridge I have a dizzying urge to
Jump off, unless it’s arching over a pond filled with lilies.

1111   Milk pours silkily out of glass bottles. We’re out of this milk.
Pick up a plastic gallon on your way home, noting the decline.

0111   Within this numbering system only 16 distinct markings may
Be possible: what I have to say is only definite, not infinite.

0011   This sudden urge to dial, to talk directly. This red streaking
Through the thick pastels of Monet’s Giverny.

I wrote this poem—in homage and parody of Wallace Stevens—for my wife Linda. When it also appeared in the Wallace Stevens Journal (in slightly different form), she said: “I thought you wrote this just for me?”   Well, yes, but…

GO TO Poems and Poetry Commentary on this site.