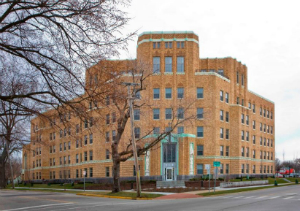 One of a series of articles I wrote during Rick Guzman’s Aurora mayoral run reported on the key leadership role he played in rehabbing the old St. Charles Hospital, rescuing the crumbling building and re-purposing it as much needed senior housing for the city.  (Read that article: “A Sleeping Beauty to Stabilize a Neighborhood.”)

Now news has come that the St. Charles Hospital rehab has won the prestigious Richard H. Driehaus Award.  The citation on the Landmarks Illinois website reads:

“Aurora St. Charles Senior Living is the recipient of the 2017 Landmarks Illinois Richard Driehaus Preservation Award for Rehabilitation. Located at 400 E. New York St. in Aurora, the project transformed the former St. Charles Hospital, a six-story Art Deco building, into a 60-unit senior housing complex. The building served as a hospital and nursing home beginning in the 1970s and closed in 2010. It then sat vacant for six years before being redeveloped as the state’s first affordable housing project to use the River Edge Redevelopment Zone Historic Tax Credit, a program in Illinois that offers development incentives in Aurora, East St. Louis, Elgin, Peoria and Rockford. The rehabilitation project included cleaning and repairing the original Art Deco-style brick, limestone and terra cotta exterior and restoring and converting the original chapel and balcony to a community room for the building’s residents. An incredible example of public and private cooperation, this iconic building can now continue to serve the residents of Aurora.”

Since 1994, the Richard H. Driehaus Foundation Preservation Awards have recognized the people who have gone through extraordinary efforts to save, restore, rehabilitate and reuse historic places in Illinois. The Foundation supports the preservation and enhancement of the built and natural environments, and encourages quality architecture, landscape design, and organizations that provide opportunities for working poor people.

A successful investment advisor, Richard H. Driehaus made his first public philanthropic gesture in 1983, when he established the Driehaus Foundation. In 1992, with the establishment of a board and the hiring of an executive director, giving became more formal and focused, particularly on preservation, and partially in partnership with the John D. and Catherine T. MacArthur Foundation.

♦  Go to the main page on this site for Emmanuel House.  This organization—founded by Rick and Desiree Guzman as a living memorial to Rick’s youngest brother, Bryan Emmanuel—also works to provide opportunities for the working poor, helping lift them from poverty through home ownership, education, volunteerism, and equitable development.  In 2016 Emmanuel House was named one of “The Top 100 Most Innovative” social change organizations in the world.