The Video/Audio below is an excerpt from the 13th show of my radio series Voices and Freedoms: A History of Jazz, based on my 1976 book of the same name.  It’s the only episode that doesn’t begin with the series’ theme song, “Afro Blue,” because it’s about the artist who recorded that song, John Coltrane. The 16-part series played across the nation for five years in the late 70’s/early 80’ and holds its relevance—or is even more so—today than it was back then. The excerpts present about 6 to 8 minutes of the original 30-minute broadcasts. The link above takes you to information about the book and our plans to re-release it and provide access to the full-length original shows. Go HERE for a complete list of shows and links to all excerpts.

This episode of Voices and Freedoms may be my least favorite, though it focuses on one of my favorite—and one of the world’s favorite—jazz musicians, John Coltrane. He transcended jazz, so even those who know little about the music seem to know about Coltrane.  I suppose my frustration with this show comes in part because he was such a colossal figure to deal with well in the original 30-minute show format.  The excerpt below is the talkiest of the excerpts because there was so much to say about him as a musical pioneer and spiritual quester that I had to cut much of the music I played to try to keep the excerpt under 9 minutes. I failed. I couldn’t get it down under 9:30.

Though the show and the excerpt below are still well worth listening to, in retrospect they fail to capture why so many people enjoyed Coltrane’s music so much.  My focus on the technicalities of his musical genius and how these challenged some of the fundamentals of jazz led me to play some of his most avant garde stuff, which could be hard to listen to.  It left out some of the most eminently listenable and exciting fruits of his experimentation: songs like “My Favorite Things,” and even “Afro Blue,” the great song that served as the theme song of the entire series.  Instead of beginning with it as I did for every other show in the series, this episode is the only one that begins with me just speaking. Ironically, I silenced some of Coltrane’s most exciting music right from the start.  I also don’t even mention 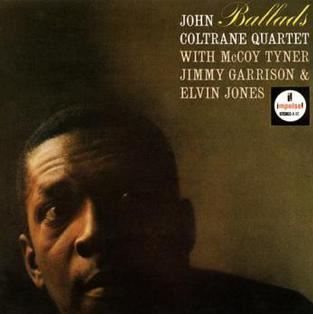 some of his most popular music, songs from his great Ballads album, for example: “Say It (Over and Over Again),” “You Don’t Know What Love Is,” “Too Young to Go Steady,” “All or Nothing at All,” “I Wish I Knew,” “What’s New,” “It’s Easy to Remember,” and “Nancy (With the Laughing Face”—these standards done so beautifully, with Coltrane’s signature sound—still searching, but with his often tortured musical explorations now muted by a reflective glow of sad tenderness and familiarity.

Luckily, I do mention what is perhaps his masterpiece, A Love Supreme, but don’t explore as much as I should have how this and his other more overtly spiritual music led him to become a cultural icon of spirituality.  There’s even a church named after him and centered around his spiritual quest: the Saint John Coltrane Church, where he is referred to as St. John Will I Am Coltrane.  It’s been going for over 50 years, and the graphic at the top of this post is the church’s main icon of Coltrane. 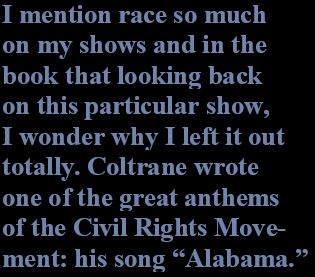 Perhaps most of all, while I do speak of his spirituality as a quest to overcome the overwhelming materialism of the West, I do not mention another thing he sought freedom from: race.  I mention race so much in both the shows and my book Voices and Freedoms that I wonder why I left it totally out here. My connection between jazz and race is one reason I say the series is even more relevant now than it was when it first played across the nation.

On September 15, 1963, a bomb exploded at the 16th St. Baptist Church in Birmingham, Alabama. Four young girls attending Sunday School that morning were killed. Coltrane responded with one of the great anthems of the Civil Rights Movement, his haunting song “Alabama.”

This, I know, has been a strange introduction to this excerpt and the whole original show. They’re still well worth listening to, as I said, but what strikes me now is how much of Coltrane they did not capture. Great spiritual figures often elude our efforts to capture their essence, and this proved frustratingly so on this show. It’s perhaps a sign not just of my failures but of how transcendent a figure John Coltrane really is.

♦ Go to the Diversity Training and Teaching main page.