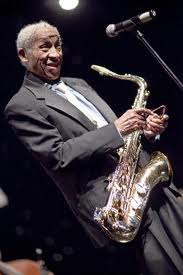 Von Freeman, one of Chicago’s titanic tenors, passed away this August, and his passing brought to mind the most beautiful lines ever written about him:

“Be-Bop is precise clumsiness.
Awkward lyricism
under a feather’s control.
A world in a crack.
Seen by ears.
Von Freeman’s
tenor Apocalypses /beginning
skies fussy about air and protective
of trombones on Jacob’s Ladder”

These come from Part 1 of Sterling Plumpp’s poem “Be-Bop” from his book The Horn Man, the whole book being based on Von’s life. And these lines come from Part 7:

“All about laughter over pain…

…This singular tenor’s rampages.
Chicago pathfinder strutting on broken glass
and bricks. So much live talk and the advice
of curtains. Pulled over opportunities.
Each a night /a leap year from evolutions
in his speech. Jug’s big hits
among my foolishness where tomorrows
climb on bones of nightscarred lynchings.
Ascend heavens where my songs elicit
their metaphors from blood…
Night
after night, landscapes offer pilgrims
a place to dream…

The tall anticipation of oak
spreads over: you can help yourself,
baby, you can rise…”

Plumpp has said his poems trace “the survival lines of my people in the many ways they did things.” His music poems illustrate what Ralph Ellison once said about the blues: that they were “one of the techniques through which Negroes have survived and kept their courage during the long period when many whites assumed, and some still assume, they were afraid.”

We will all miss the courage you gave us, Von Freeman.