Stranger in the Village: Style and Rage

Posted on September 3, 2017 by Richard Guzman

I, like many others, believe that James Baldwin’s “Stranger in the Village” is the greatest essay ever written in English.  It’s scope, for one, is titanic.  It moves from a story of one black man’s experiences in a Swiss village to an analysis of the underpinnings of Western civilization, especially those that birth and nourish racism.  It is haunted by memories emanating from childhoods on Atlanta streets, slaves on the auction block, missionaries strolling African villages, gargoyles on the Cathedral at Chartres.  I will comment on these larger issues in “Stranger in the Village: Searching for Whiteness” but want to start here by looking closely at just one paragraph, partly for its content, but mostly—though this may seem minor to some—for the way Baldwin controls sound and rhythm.

“Stranger in the Village” is the concluding essay of Baldwin’s 1955 masterpiece Notes of a Native Son, and he places the paragraph in question about one-third of the way through: 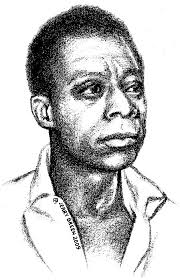 “The rage of the disesteemed is personally fruitless, but it is also absolutely inevitable; this rage, so generally discounted, so little understood even among the people whose daily bread it is, is one of the things that makes history.  Rage can only with difficulty, and never entirely, be brought under the domination of the intelligence and is therefore not susceptible to any arguments whatever.  This is a fact which ordinary representatives of the Herrenvolk, having never felt this rage an being unable to imagine it, quite fail to understand.  Also, rage cannot be hidden, it can only be dissembled.  This dissembling deludes the thoughtless, and strengthens rage and adds, to rage, contempt.  There are, no doubt, as many ways of coping with the resulting complex of tensions are there are black men in the world, but no black man can hope ever to be entirely liberated from this internal warfare—rage, dissembling, and contempt having inevitably accompanied his first realization of the power of white men.  What is crucial here is that, since white men represent in the black man’s world so heavy a weight, white men have for black men a reality which is far from being reciprocal; and hence all black men have toward all white men an attitude which is designed, really, either to rob the white men of the jewel of his naivete, or else to make it cost him dear.”

The first part of the paragraph focuses on rage, and Baldwin loads it, sound-wise, with sibilants (mainly “s’s”) and plosives (like “t’s”), starting with the strange word “disesteemed.”  Rage hisses and explodes, especially in the sentence concluding the focus on rage:  “This dissembling deludes the thoughtless, and strengthens rage and adds, to rage, contempt.”  The rhythm begins by racing down the slope of rage, then slows (“and adds, to rage,”), then stops the glide cold with all  the bitterness of the isolated word “contempt,” the “t” explosive and final.  The next sentence brings in a new tone, perhaps best heard in the difference between the plosive—or “explosive”—sound of the “t” in “contempt” versus the cooler, more deliberative sound of the “t” in “doubt.”  This makes way for the cooler, liquid “l’s” in the words “resulting,” “complex,” “black,” “world,” “black” (again), “entirely,” “liberated,” “internal,” so that when Baldwin repeats “rage, dissembling, and contempt” the sibilants and plosives are this time more muted, surrounded as they are with liquid “l’s.”  The very sounds signify that rage can, in important ways, be dealt with by more than dissembling.  Black men can be calculating about it.  Dissembling isn’t just a reflex but an actual plan, the end of which is to “rob the white man of the jewel of his naivete, or else to make it cost him dear.” 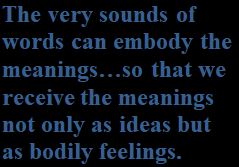 Artists—especially the great ones—pay attention to these details.  The very sounds of words can embody the meanings he or she is attempting to convey, so that we receive the meanings of words not only as ideas but as bodily feelings.  Baldwin writes complex prose. The sentences are long, with ideas embedded in ideas embedded in other ideas.  And because he is also very ironic and full of unresolvable tensions—something I comment on in “Fearing and Embracing the Void”—to read Baldwin for just his ideas may be tough going for many.  But when you hear his rhythms, catch the way he designs the sounds of his most central passages, it begins to make more sense, or—in this paragraph especially—you understand in a more embodied, gut-level way that rage can’t ever be completely logical.  That’s part of its power and tragedy, a combination—power and tragedy—so potent that it creates history more than our puny, logical plans do.

♦  This article is part of two series:  A series on James Baldwin (its Lead Post entitled “All Things Baldwin“), and a series on The Arts of the Essay.

♦  Go to “Buckley vs. Baldwin” for more on the importance of sound, here especially the sound of Baldwin’s (and Buckley’s) voice.

This entry was posted in Black Writers, Social Change, Writing and tagged James Baldwin, Notes of a Native Son, Stranger in the Village, white supremacy. Bookmark the permalink.