The Arts of the Essay

This is the lead post in a series on The Arts of the Essay, a list of series items appearing below, beginning with thoughts on Bonnie Rough’s essay “Notes on the Space We Take Up.”

“Oh, yes, THAT essay,” said Zach Murphy, “Best one ever!”  One of my favorite students, Zach—besides being a very good writer—is also a very good magician, so, since transformations and appearance/reality were a big theme in a recent class he was in, I figured, Why not begin each session with one of his card tricks? You think a card is here but it’s there. You think it’s the Jack of Hearts but it’s really the Queen.  All fabulous, I thought, an alchemy that’s always thrilled me even though I know it’s a trick and involves misdirection. 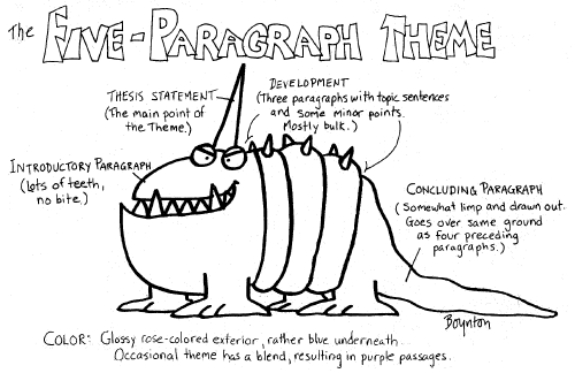 I think of Murphy now because in this series I want to talk about the alchemy of a great essay, which in many cases involves misdirection.  The alchemy happens between what often appears like a random surface, a surface which seems rambling, illusive, full of crazy jumps.  But that surface often co-exists with—is in creative tension with—an underlying structure that’s often surprisingly symmetrical, sometimes even linear.

Linearity is king, I suppose, and clarity, too, and one way we’ve evolved to instill these traits is the Five-Paragraph Theme, parodied in Boynton’s famous cartoon—though I’m not necessarily embarking on a diatribe against the form.  Students do need straightening out…sometimes.  They need to be able to stick to the point…sometimes.  And if I had to grade as many essays as those gallant teachers had to grade, I’d adopt some form I could scan quickly and understand quickly too. 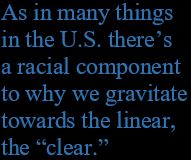 However, you don’t read most great essays quickly, and they often do not present an apparent, clear thesis about a topic—at least not at first. They circle a topic, probe it, weigh it, attempt some something with it—all things consistent with the etymology of the word “essay,” from the Latin and French exagium (the act of weighing: but notice it’s the act, not necessarily the exact weight itself), or the infinitive essayer (to “try” or “attempt”).

As in many things, especially in the U.S., there’s also a racial component to why we gravitate towards the linear, the “clear.”  In her provocative book Other People’s Children, Lisa Delpit remarks on research which found that “…there was a tendency among young white children to tell ‘topic-centered’ narratives—stories focused on one event—and a tendency among black youngsters, especially girls, to tell ‘episodic’ narratives—stories that include shifting scenes and are typically longer.”  They were full of associations and were non-linear, something that bothered all white adults responding to the stories, but not black adults.  And who usually hands out the grades? 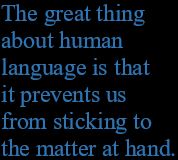 So we could say that whiteness gravitates towards the Five-Paragraph Theme, the linear outline, the check list, the grading rubric, but race is only one aspect of it.  Many of the writers I write about in this series are white, after all.   Perhaps the larger issue is language itself, in whose very foundation is buried an intractable ambiguity, even a kind of wander lust.  A semiotician, one who studies the nature of signs, would say we think there’s a solid, natural connection between a sign and the thing it signifies.  But there isn’t.  There’s always a meaning gap, a failure of the sign to communicate completely; and what it does communicate is largely a cultural construction.  Nothing natural about it.  In reality all signs float, they travel here and there, meaning this and that.  A great writer, a great essay, taps into the power of this ambiguity, this wandering trait in all language. “The great thing about human language,” said the noted essayist and doctor Lewis Thomas, “is that it prevents us from sticking to the matter at hand.”  That’s how new things are discovered, new things said.

There’s also a kind of randomness in a great essay, one that mirrors most of the conversations we have with our friends. True, I do have a friend who sometimes calls up, saying, “Richard, I’d like to discuss three things with you. One…Two…Three,” but that’s unusual.  Usually our friend conversations drift, and circle, and shift.  “I just love him.  He’s so random!”  I’ve heard many, many people say.  That’s one reason almost every student—not just Zach Murphy—in every class I use it loves that Bonnie Rough essay the most. It’s so random, and yet, underneath, so structured. What’s the underlying structure that holds random, rambling friend conversations together?  It’s, well, friendship.  One usually develops historically, even linearly—it starts at one point—but it grows and deepens through drifts, and circles, and shifts.

This entry was posted in Writing and tagged 5-paragraph theme, The essay. Bookmark the permalink.