The Cost of Racism: 16 Trillion Dollars 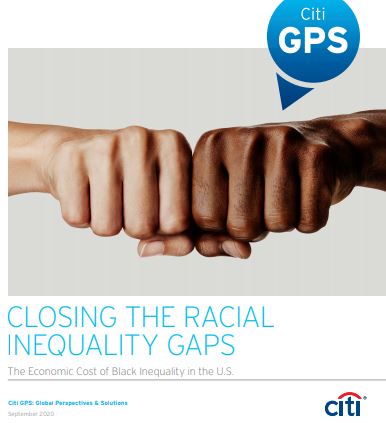 And that’s just over the last 20 years, and “just” when it comes to discrimination and inequities concerning Black Americans.  According to a new report from Citi Corp’s GPS group (Global Perspectives and Solutions), nearly sixteen TRILLION dollars have been lost. You can read the full report HERE.

Titled “Closing the Racial Inequality Gaps: The Economic Cost of Black Inequality in the U.S.,” the report begins by quoting one of the most famous passages from MLK, Jr.’s “Letter from a Birmingham Jail:”  “We are all caught in an inescapable net of mutuality, tied in a single garment of destiny. Whatever affects one directly, affects all indirectly.”  And, really, it’s not all that indirect.

The report focuses on four areas, three of which I’ve written about on this site.  (1) The Racial Wealth Gap:  The overall wealth gap has grown to absolutely astonishing proportions since 1965, but the racial wealth gap is even worse.  Closing that gap could have added $2.7 trillion in income, or .2% to our GDP per year.

(2) Home Ownership:  Improve access to housing credit and 770,000 Black-owned homes might have been added since 2000, a gain of $218 billion in sales and expenditures.  Lack of home ownership is the single greatest driver of the racial wealth gap.  (3) Education:  Facilitating access to higher education could have added $90 to $113 billion to lifetime incomes.  Instead inequities in education are still rampant across the nation.  And (4) Fair and Equitable Lending to Black Entrepreneurs:  This could have generated $13 trillion, plus created 6.1 million jobs per years. ***

Sixteen trillion is nearly 75% of the U.S.’s 2019 GDP, but even the four areas above comprising the report’s core don’t tell the whole story of loss.  The report touches on policing, imprisonment, healthcare, and more, and even includes an overview of the Civil Rights Movement as a way to add context and to search for causes of the racial crises which continue to plague us.  Mental and physical sickness, lives traumatized, lives lost—add these as the direct result of unequal policing, unfair imprisonment, and health care inequities and the price soars well, well past $16 trillion dollars.  There’s also much more to pile on, like Voter Suppression, which also costs us a lot.

It’s good to have all these inequities quantified, with dollar signs attached to many of them.  The Clinton campaign coined the phrase “It’s the economic, stupid!” and we seem to listen more when it comes to pocket-book metrics.  But, of course, many don’t experience these inequities, and many don’t believe they exist.  We’re still a nation divided, largely unaware of each other’s experience of life, which is one reason the report concludes that bias and systemic racism have blocked substantial improvement over not just the past 20 years, but over the 158 years since the Emancipation Proclamation, and the centuries more since the first African slave landed on American soil. 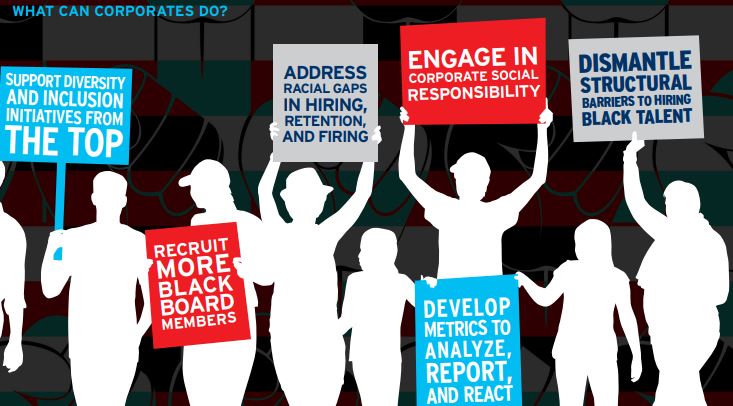 In his TED Talk “How Racism Makes Us Sick,” public health sociologist Dr. David R. Williams explains a metric that can help us gauge and understand how racism affects the daily health and shortens the lives of so many people of color.  It’s an ultimately uplifting talk, full of “we-can-do-it” optimism, but I believe there’s also an ominous undertone.  If we don’t overcome bias and systemic racism—and we haven’t been doing a great job of it so far—then racism won’t continue to make just Blacks and other people of color sick.  It will continue to make our entire people, and our nation’s morals and body politic sick, too.  And it will continue to rob us of so many life-affirming, life-enriching friendships we could be having across racial and ethnic lines.  Sixteen trillion dollars doesn’t begin to convey the magnitude of such loss.

*** I have written a lot about the first three partly because our family foundation, Emmanuel House—now The Neighbor Project—focuses on home ownership, the single greatest driver of the racial wealth gap.  The stability created by home ownership boosts high school graduation rates by 25%, and college graduation rates by 116%.  The best introduction to The Neighbor Project’s work and vision is executive director Rick Guzman’s talk “Every Person’s God Given Ability to Contribute,” in which he, too, uses the MLK, Jr. passage that begins the Citi Corp report.  But home ownership is all over this site, even including a review of the Christmas classic It’s A Wonderful Life, or a profile of Lorraine Hansberry, who wrote A Raisin in the Sun.  In his talk Rick Guzman also mentions the opening of the Financial Empowerment Center, a joint venture of The Neighbor Project and the City of Aurora, Illinois, which we hope will make inroads into more fair and equitable lending as well.

♦  Go to the TEACHING DIVERSITY page.

This entry was posted in Social Change and tagged Citi GPS Report, cost of racism, The Neighbor Project. Bookmark the permalink.