The Courage of Turtles 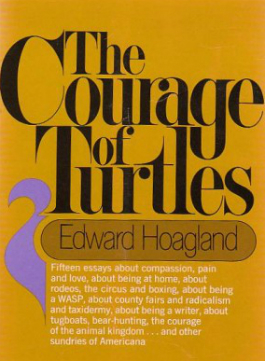 This article is part of a series on The Arts of the Essay.

“Turtles are a kind of bird with the governor turned low.”  That’s the first sentence of one of Edward Hoagland’s signature essays, “The Courage of Turtles.”  In the last sentence of the first paragraph he says that through amber water they’re “big as greeny wash basins,” and thus the onslaught of metaphors and similes about turtles begins.  And not only of turtles.  Haogland describes snakes—in contrast to turtles, which he thinks are “personable beasts”—as “dryly silent and priapic…smooth movers, legalistic.” Most of the comparisons fall on turtles, however, partly because for Hoagland they “manage to contain the rest of the animal world.”

Their legs are “cruelly positioned for walking,” but turtles “keep plugging along, rolling like sailorly souls.” They stick their necks out like giraffes, have a penguin’s alertness, graze like a cow moose, remind him of a Brontosaurus “when they rise up on tiptoe,” or a lion the way they stare at the sun. They can also “loom underwater like an apocryphal hippo”—not just like a hippo, but an apocryphal one, whatever that means, though that may be easier to understand than this, when he’s describing his adult wood turtle (whose shell is “the equal of any seashell for sculpturing, even a Cellini shell”): “She can walk on the floor in perfect silence, but usually lets her shell knock portentously, like a footstep, so that she resembles some grand, concise, slow-moving id.”  Just putting those last five words together like that: grand/concise, slow-moving/id! 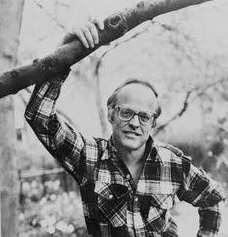 The essay, like many Hoagland pieces, is environmental at its core. Humans encroaching on their land, humans feeding them all the wrong stuff, humans misunderstanding their nature as pets—painting on their shells, for example, which stunts the shell’s growth so that their insides slowly crush them to death as they grow—all these require that “courage” to survive.

One day he’s walking on First Avenue and notices a basket of live turtles.  They’re “creeping over one another gimpily, doing their best to escape.”  Thinking they’re wood turtles, his favorite, he buys one, only to discover on closer inspection at home that it’s a diamond-back terrapin, bad news as it needs brackish water.  He tries raising him, but finds “his unrelenting presence exasperating” and finally carries him to the Morton Street Pier on the Hudson and dumps him in on a gray, windy August day.  The essay ends: “Too late, I realized that he wouldn’t be able to swim to a peaceful inlet in New Jersey, even if he could figure out which way to swim. But since, short of diving in after him, there was nothing I could do, I walked away.”

Hoagland seems to know everything there is to know about turtles and has showered them thickly with all kinds of wonderful, strange comparisons, so the ending is doubly, triply shocking—perhaps because it’s so matter-of-fact, so oh-well.  And it highlights what’s at the core of so many great essayists: a central tension they obsess over. For Hoagland it’s the tension between connection and disconnection.  His detailed knowledge of turtles, all those metaphors and similes—that’s connection: strong, creative, empathetic.  But then there’s the sudden disconnect.  Oh, well.  In “In the Toils of the Law” he tells about his jury duty experience, praising the idea that we’re all entitled to a trial by a jury of our peers; but by the end you realize that so many cases don’t reach a jury at all. A judge declares mistrials; lawyers plea bargain them away.  In “A Low Water Man,” a famous Sports Illustrated piece, Hoagland writes about Henri LaMothe, whose act is to dive from higher and higher platforms into less and less water, a feat that both solicits our applause, but—because of its very bizarreness—prevents us from clapping that hard, if at all.  In “Dogs and the Tug of Life,” we want to connect with dogs, yet they are becoming “a bridge to nowhere.”

These central tensions often lead to profound ironies, and certainly surprises, that probe deeply into the complexity and ambiguity of life.  Every good essay needs a central tension to hold it together.  For great writers these central tensions, as I said, are obsessions—and the greater the writer, the greater the obsession, it seems—but they are also the font of their insight and creativity.  Connection-Disconnection is everywhere in Hoagland, and perhaps nowhere more bizarrely and movingly than in “Threshold and the Jolt of Pain.”

♦  This article is part of a series on The Arts of the Essay.  Go to the series’ Lead Post.

This entry was posted in Writing and tagged Edward Hoagland, The Arts of the Essay, The Courage of Turtles. Bookmark the permalink.