The Cross and the Lynching Tree

The Video below* shows about 8 minutes of what I consider one of the most powerful sermon talks ever: James H. Cone’s meditation joining the brutal death of Jesus on the cross to the brutal deaths of nearly 3500 Blacks lynched in the United States.  Speaking in 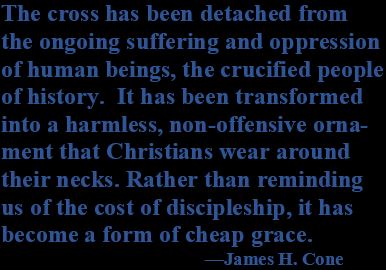 his distinctive high tenor, Dr. Cone says Christians in America simply cannot understand their identity unless they understand the relationship of Jesus on the cross and Blacks hanging from lynching trees.  Despite being lynched by seemingly good Christian whites—sometimes on church grounds—despite having the Bible used as a weapon to justify slavery, Blacks still clung to Christianity, still sang fervently “Jesus keep me near the cross,” because they felt that if God was with Jesus during his crucifixion, he would be with them in the brutalities they endured.  This faith, says Cone, kept them from going mad while enduring the horrors they did.  “As James Baldwin wrote,” says Cone, “‘Whites discovered the cross by way of the Bible, but Black people discovered the Bible by way of the cross.'” 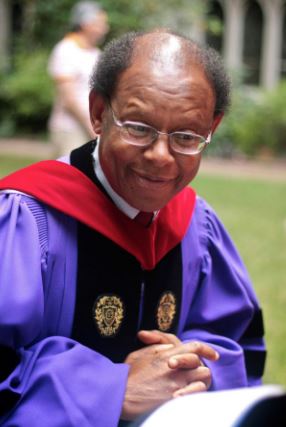 Leaning on a famous line from Dietrich Bonhoeffer, Cone says the cross “has been detached from the ongoing suffering and oppression of human beings, the crucified people of history,” to become “a harmless, non-offensive ornament Christians wear around their necks. Rather than reminding us of the cost of discipleship, it has become a form of cheap grace.”

Cone was born on August 5, 1938, in Fordyce, AK, in 1938, growing up in the racially segregated town of Bearden, Arkansas.  With his family he attended the Macedonia African Methodist Episcopal (AME) Church, and later an AME community college (Shorter College)  before receiving a B.A. from Philander Smith College in 1958.  He continued on, earning a Bachelor of Divinity degree from Garrett–Evangelical Theological Seminary (1961), and M.A. and Ph.D. degrees from Northwestern University (1963, 1965).  He returned to Philander Smith College to teach theology before, in 1970, moving to Union Theological Seminary in New York City, where he taught and wrote the rest of his life.  In 1977 he was awarded the distinguished Charles A. Briggs Chair in systematic theology.  His 1969 book Black Theology and Black Power defined the distinctiveness of theology in the black church and marked him as perhaps the greatest advocate of black theology and black liberation theology.  In it’s Preface he wrote, “This book was my initial attempt to identify liberation as the heart of the Christian gospel and blackness as the primary mode of God’s presence. I wanted to speak on behalf of the voiceless black masses in the name of Jesus whose gospel I believed had been greatly distorted by the preaching and the theology of white churches.”

In the 1950’s Malcolm X had proclaimed that Christianity was being taught as a white man’s religion, and while Cone followed Malcolm X’s lead to a degree, he also sought to reclaim Christianity for Black people by emphasizing its historical importance to Black survival, its message of freedom for the oppressed, deliverance from social, economic, and political injustice, and also Jesus’ oneness with suffering people. “Liberation,” he often said and wrote, “is not an afterthought, but the very essence of divine activity.” Before Cone’s Black Theology and Black Power, forms of Black Liberation Theology were, of course, central to the Civil Rights Movement, and shortly after his seminal book theologians like Basil Moore, a Methodist, popularized this theology in southern Africa where it became central in the fight against apartheid.  Shortly before his death in 2018, Dr. Cone was elected to the prestigious Academy of Arts and Sciences in recognition of his long career, which bore fruit not only in the academy but in the everyday lives of suffering people everywhere.  The video below is about as succinct a summary as there is of James Cone’s powerful theology, a theology which means perhaps more now at this particular juncture of American history.  We will never fully and deeply come to terms with the harm of slavery and racism, a harm which continues strongly and often unabated today, until we come to terms with Cone’s message.

* The video below is my slight edit, then slight expansion of a YouTube video posted by Porsche Abraham in April 2020.  I substituted one of Billie Holiday’s versions of “Strange Fruit” at the end.  You can find several full versions of Dr. Cone’s iconic address on YouTube and elsewhere.

♦  This essay is part of a series on the anti-racism workshop “Becoming the Beloved Community.”  Go to the series Lead Post, and go Here for a series of talks and workshops I have led.