The Video/Audio below is an excerpt from the 6th show of my radio series Voices and Freedoms: A History of Jazz, based on my 1976 book of the same name.  This show is about the so-called Jazz Age, which ran roughly from 1919 to 1929. The 16-part series played across the nation for five years in the late 70’s/early 80’ and holds its relevance—or is even more so—today than it was back then. The excerpts present about 6 to 10 minutes of the original 30-minute broadcasts. The link above takes you to information about the book and our plans to re-release it and provide access to the full-length original shows. Go HERE for a complete list of shows and links to all excerpts. 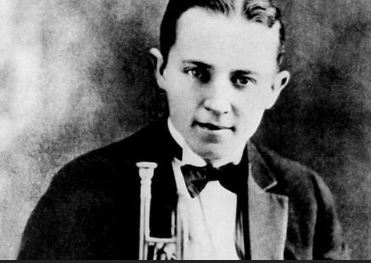 The writer F. Scott Fitzgerald defined the so-called Jazz Age as starting roughly with the May Day Riots of 1919 and ending with the great Stock Market Crash of 1929.  The Roaring 20’s, the Age of Flappers, and excess, and a nation reeling from the carnage of WWI and fearful of another World War. So many writers of the time were saying the West was in trouble. Fitzgerald told us that Jay Gatsby’s extravagance was founded “on a fairy’s wing,” and as jazz finally truly entered into the American mainstream it did so partly because white imitators once again stole another product of Black Americans.  In many instances jazz was watered down so much that it, too, seemed founded only on a fairy’s wing. 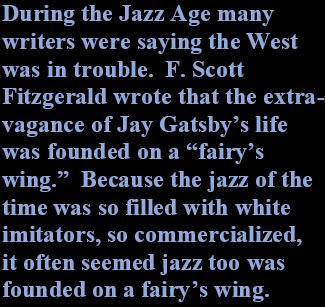 The Victor Recording Company did offer its first jazz recording to a Black man, Freddy Keppard, but Keppard refused, fearing—rightly, though in an impractical move—that records would make his music easier to steal.  The first jazz recording contract, then, went to the Original Dixieland Jazz Band, though there was little “original” to the band. They were neither as good, or as bad, as some have made them out to be, but fell far short of representing the fullness of jazz.  They pretended to be unschooled and free, but improvised little, if at all. “I don’t know how many pianists we tried,” said coronetist Nick LaRocca, “until we found one who couldn’t read music.” The public went wild and the ODJB’s posturing was one of the forces that started a vogue for “The Negro,” a vogue which saw Blacks as uninhibited, primitive, unschooled…but entertaining.  It was fashionable to have “A Negro” at your parties, or to go up to Harlem to all-white clubs to be entertained by all-black bands.  Even so elegant a personage as Duke Ellington couldn’t break that stereotype.  And while Nick LaRocca and the ODJB gave hardly gave Blacks any credit at all, a much better white jazz band, the New Orleans Rhythm Kings, did. They knew where the music came from and respected that fact. 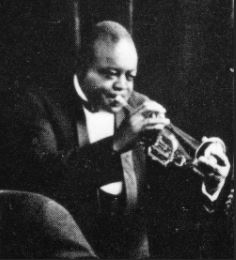 There were other important white bands, like Chicago’s Austin High Gang, who got their first serious taste of jazz from the New Orleans Rhythm Kings, and some white great musicians who appeared: Eddie Condon, Frankie Trumbauer, Gene Krupa, Jimmie McPartland, Red Nichols…. The radiant center, the star of this group had to be Bix Beiderbecke.  I just couldn’t find a good place in the original show to start smoothly talking about Bix, so there’s a kind of confusing jump in the excerpt below.  Suddenly I start to talk about what Louis Armstrong said when he first heard Bix. He said, “There’s a man as serious about music as I am.”  He lacked Armstrong’s bold tone and improvisational flourish.  His style was more laid back.  He was less of a virtuoso but had a beautiful tone and wonderful lyric sense.  The great Lester Young carried a copy of Frankie Trumbauer’s “Singing the Blues” in his sax case, in large part because of Trumbauer’s and Bix’s solos.  Beyond his music, Bix’s life came to symbolize the costs of the 1920’s lifestyle. In poor health, an alcoholic, he died in August 1931 at the age of 29.

The first Black man to record jazz was Joe “King” Oliver, though he was an older man when he first recorded and so we catch only a glimpse of the genius that made him so important to jazz. Not only was he a great musician, he was Louis Armstrong’s mentor, and he played a lead role in the great Northern migration of Blacks when he headed to Chicago. 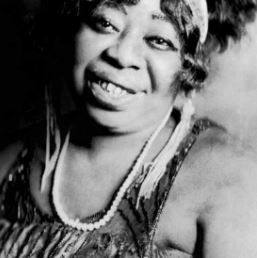 The excerpt below ends with a nod to Blues singers, all women. Mamie Smith was the first to make a Blues record, an act which started the whole, massive enterprise of Race Records. There was also Bessie Smith, and we end with a moment from Bessie’s mentor, Ma Rainey. Not until Ray Charles’ “I Got a Woman” in 1956 would a “Race Record” cross over into the general American public.  In the 20’s jazz entered the American musical mainstream, but the races and their cultures were still so separate. As Black American soldiers returned from World War I, they too remained largely segregated. Everyone was traumatized by the Great War, but that trauma wasn’t enough to break down racial barriers and injustices.

♦ Go to the Diversity Training and Teaching main page.