May 11, 2019.  Just a year after Emmanuel House and The Joseph Corporation merged to become The Neighbor Project, the new organization held its very first Gala fund raiser in one of Aurora’s newest premium venues: Bureau Gravity, just across the street from Emmanuel House’s first headquarters.  The VIDEO below shows a few minutes from this wonderful evening, complete with—in addition to a great dinner—live art, live music, a live auction…and a unique challenge.

On the Emmanuel House page on this site, I spoke of helping 20-30 families a year, but of being poised to triple that number.  The merger made that tripling a reality, creating an organization that went far beyond what the two could do separately.  In its first year The Neighbor Project saw nearly 100 families start on the path to home ownership, plus dozens more saved from being foreclosed on in the house they already lived in.  It was truly something to celebrate. 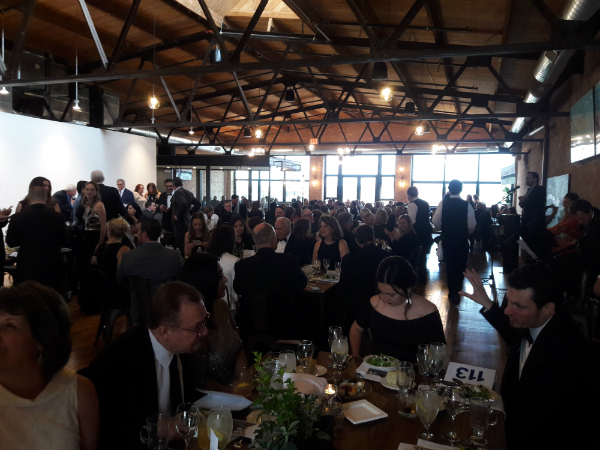 Catherine Tilley Design did live art.  Coming into the venue’s main third-floor space, you saw her and an assistant busy painting a mural containing some answers gala attendees gave to the question, Who is my neighbor?  Then near the end of the evening, the two painters began peeling away what they had just created!  What was going on?  As Rick Guzman, The Neighbor Project’s executive director, spoke of The Neighbor Project’s birth, its goal of giving hope to families, and how unleashing their potential made not just them but all of us better people, the two painters peeled away what we thought was a finished work to reveal a mural reflecting the evening’s major challenge.  “Be the change you want to see in the world,” Gandhi famously said.  So we must go beyond even “Love thy neighbor” to actually “Be the neighbor,” a much more complex, transformative challenge.

You can see them painting, then revealing “Be the Neighbor” in the VIDEO below and catch a glimpse of Rick’s message, too, a message where he echoed some words he spoke when he first introduced The Neighbor Project a year ago—especially: “We ignore our neighbor’s promise and potential at our own peril.”

The live music from Violetta and Lucas featured a range of songs, and I was heartened that the young duo did many songs from the Great American Songbook: “How High the Moon,” “The Nearness of You,” etc.  The music’s safe in these young hands, I thought.  It was a thought doubly reinforced when we heard from Joseph and Angeline, two young people whose growth and future took off when their parents were able to buy a home with Emmanuel House and The Joseph Corporation, who were long-time partners before they merged.  Joseph is now a college grad with a finance degree and property of his own, while Angeline got her CNA even before graduating from high school and is now off to college for her full nursing degree.

Then the live auction, always entertaining, especially because of our auctioneer, the fabulous Peter Burchard!  There’s a few seconds of him extracting the highest bid of the evening, but what’s not shown in the VIDEO below is perhaps the most moving moment of fund raising that evening.  Just as he did in early April last year when Emmanuel House held its own gala, the final event it held as Emmanuel House, Peter simply asked people to give more. “Rick, how much does it cost to put a family through The Neighbor Project program?” “$5000,” Rick answers.  “How many people would pledge $5000 to put a family through the program?” Peter says.  Three people raise their hands.  More raise their hands at $2500, more at $1500, even more at $1000.  They’re not bidding on anything, not going to get anything but the joy of giving.  Peter Burchard is touched, on the verge of tears.  Perhaps it’s a sign that these, and many others there that night are actually on their way to Being The Neighbor.

♦ Go to The Neighbor Project website, and to the Emmanuel House website for more information, and (on TNP’s site) to watch an intro video.