These “New Heroes” are techies, business men and women, entrepreneurs, and social workers committed to tackling social issues from poverty and human trafficking to greening the planet.  The DVD pictured at left—The New Heroes: Their Bottom Line Is Lives—was produced by Oregon Public Broadcasting, and funded by PBS viewers, the Skoll Foundation, Calvert Investment, and the Flora Family Foundation.  It contains mini-documentaries, each about 15-20 minutes long gathered together under four episode headings:

One of the documentaries in Episode 3, on Enterprise, focuses on Muhammad Yunus, for example.  The now-Nobel-Laureate Yunus founded the Grameen Bank and was one of the pioneers in using microfinance to lift millions of the most impoverished people out of poverty.  This and several of the other episodes are now available online.  Look at a Muhammad Yunus online project I use in my Leadership for Social Change class.  It contains a link to The New Heroes Yunus documentary now on YouTube, as well as links to videos on the work of Jessica Jackley, whom Yunus inspired to create Kiva.org. 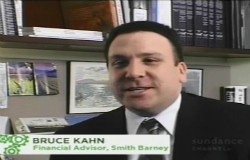 The VIDEO below, from the Eco Biz series, features Bruce Kahn, an investor at Smith Barney.  A former Peace Corp volunteer, Kahn now works to steer clients towards Green Alternatives whenever possible.  Eco Biz is sponsored by Smith Barney, so this episode—probably the whole series—is an example of CSR, Corporate Social Responsibility, which comes in for heavy criticism regularly.  Are businesses in it just for PR, or are they really committed?  Do one’s motives have to be that pure?  Bruce Kahn isn’t Muhammad Yunus, but the reverse is true as well, and Yunus hasn’t exactly become poor by starting Grameen Bank.