The Quiet After Easter

Where are the pockets of quiet in our year?  Not now, as end of school year events—graduations, concerts, parties, summer planning—crowd our days and nights.  On March 26th this year, I held a Becoming the Beloved Community workshop and was supposed to follow up with participants in two weeks, but Holy Week and Easter and tax season intervened.  And the Sunday after Easter Sunday I delivered the sermon you can see in the VIDEO below.

“And what was your weekend like?”  That’s how Chris Rock opened his first comedy show the week after Will Smith slapped him in front of the whole world at this year’s Oscars.  But Christians have a corner on that question because no matter what you did on any particular weekend, no one had a bigger weekend than what we celebrate on Easter Sunday.  In The Book of Revelations the risen Christ is revealed as “…the Alpha and Omega…who is, and who was, and who is to come, the Almighty” (verse 1:8). He is the Lamb who was slain for the sins of the world.  But ironically the days and weeks after Easter are one of the quietest times in our year. 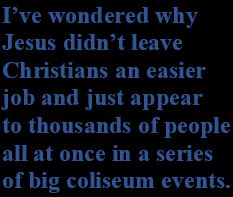 I’ve wondered why Jesus didn’t leave Christians an easier job and just appear to thousands of people all at once in a series of big coliseum events.  Instead, he appears in mostly quiet moments: to two people on the road to Emmaus, for example.  They’re referred to as disciples but remain unnamed and certainly aren’t two of the remaining eleven.  Those disciples were hiding out in fear.  And Emmaus?  We don’t know exactly where that is.  He first appears to women—four of them Mary’s—whose testimonies would not have been respected in that day, and when he does he does not announce that he is the Alpha and Omega.  He simply says, “Mary,” to the first Mary.  He’s so quiet and unpresuming the two women think he’s just the gardener.  My favorite after-Easter incident is when Peter spies him on shore from a boat.  “It’s the Lord,” he says, and jumps out of the boat to swim towards him.  And what is Jesus doing? He’s cooking them breakfast.  He’s going to eat with them just as he does with the two disciples on the road to Emmaus.

In these meetings, Jesus often gives those he meets the so-called “Great Commission:” to spread the gospel—the Good News—throughout the world.  The sermon below contrasts the big ways we approach this—preaching, building churches and other institutions, etc.—but it focuses on three quieter ways we do this, ways suggested by what Jesus does during the quiet days after Easter.  We eat together, we walk through doors, we share where we’ve been hurt.

♦ Because I speak about the road to “Emmaus” quite a bit, I play my composition “Emmaus” right before I begin the sermon.

♦ OTHER SERMONS (most with VIDEO):  “Pentecost Means No ‘Supremacies,’” “Sacred Doing,” “It’s Not What You Know But Who You Know,” “Elijah: The Growth of a Prophet,” “Searching for Prophets,” “Three Things to Stop Saying,” “How Holy Was Jesus?” “Who Do You Stand With?”  “Servants Know First,” “Everything’s OK?” “Theology and Race.”

This entry was posted in Faith, Music & Media Podcasts and tagged Jesus appears after Easter, The Resurrection. Bookmark the permalink.