Every time I see a headline like the one below—“Racial Bias Among EMTs?”—I’m almost never surprised any more.  I have a big stack of reports from the Chicago Tribune detailing facts that black people, especially, get the poorest health care and education and job opportunities, are stopped unfairly by police and go to jail in hugely disproportionate numbers, also unfairly, are more harshly punished in school, etc. etc. etc.  I like using the Trib because it leans conservative—way conservative, some would say—so the reports can’t be accused of liberal bias. 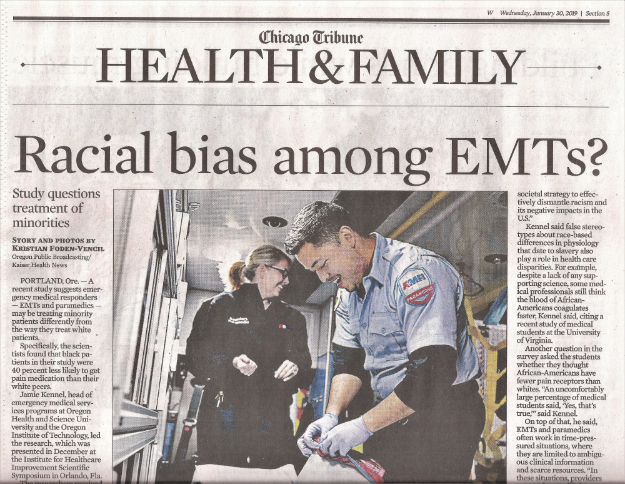 Racism persists for very deep reasons.  James Baldwin has written about its roots in our symbolic reaction to the color black itself, and to our inability to deal with the real complexities of our humanity.  Less deep than these, though, are reasons most may not see because—unless you’re black—your chances of experiencing, say, unequal treatment from EMTs is so much lower you’ll probably never experience it at all.  Many whites will also tend to look at blacks as a whole and see large numbers of them living in the poorest neighborhoods, holding the lowest jobs, achieving at levels far below others.  They will tend to think that its been some years since Emancipation, why have blacks made so little progress.  One answer is institutional or systemic racism—attitudes and policies baked into the normal ways we do things every single day—which keep blacks from really accessing the opportunities they need.  This may also be difficult to understand if you’re not on the receiving end of it. 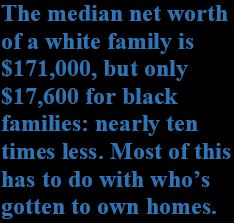 Now, however, more and more people are becoming aware of growing income inequality and the growing wealth gap in the United States.  Bill Clinton’s colorful campaign strategist James Carville coined the slogan “The economy, stupid!” and dollars and cents seem to get through to people quicker than anything else.

There are any number of YouTube videos on the Racial Wealth Gap: lectures, interviews, animations, even one which attempts to explain it in 60 seconds.  I invite you to check these out.  But for me, the best video comes not from YouTube but Netflix.  The very first episode in its series Explained is a 16-minute film on “The Racial Wealth Gap.”

Near the beginning the film notes that the median white household’s net wealth is $171,000, but only $17,600 for black households—nearly 10 times less.  And since, on average, two-thirds of a family’s wealth comes from their home, home ownership is this short film’s central concern, a concern very prominent on this website.

When Rick and Desiree Guzman started a foundation, Emmanuel House, to honor the memory of Rick’s youngest brother, Bryan Emmanuel Guzman, its focus was on getting the working poor out of poverty through education, community involvement, equitable development—all these, yes—but mainly through home ownership, which adds a wealth and stability that makes all those other things more possible.  When Emmanuel House merged with long-time partner The Joseph Corporation, it became The Neighbor Project and increased its capacity by over 10 times to get people into their first homes, or stay in the homes they were already in.

In another post,  “The Racial Wealth Gap and Home Ownership,” I detail how the short Netflix film mentioned above presents the black family’s fight to gain equal housing opportunity, and thus begin building wealth.  It’s a fight of titanic proportions and titanically unequal odds. First of all, blacks start over 350 years behind whites, legally speaking, but still continue struggling to be let in to the housing market even to this day. This enormous inequality recently led the City of Evanston, IL, to begin a reparations program, again centered on home ownership.  Lack of good home ownership opportunities are the single greatest driver of the racial wealth gap.

♦  Go to another article on Income Inequality, “Graphic Inequality,” and two follow-up articles mentioned above: “Home Ownership and the Racial Wealth Gap” and “Reparations,” both focusing on building wealth through home equity.

♦  Watch my sermon “Searching for Prophets,” which touches on issues related to income inequality and the wealth gap.