The Rhythm of Rage

Stephon Clark was the father of two. Only the top part of this picture has been shown in most news stories, prompting some to question, again, how we choose to represent black people.

I honestly don’t know what’s prompted me to write this comment on the shooting death of Stephon Clark.  I have mentioned Trayvon Martin, Philando Castille, Eric Gardner, Michael Brown, etc. etc. in other writing, but only Martin was the subject of a full piece.  Perhaps it’s because I was getting ready to travel to California when on March 18, 2018, two police officers fired 20 rounds at Clark as he stood in his grandmother’s back yard in Sacramento, California, his cell phone in one hand.  A week later hundreds of protestors, led by Stephon’s brother Stevonte, disrupted a Sacramento City Council meeting, holding up their cell phones and shouting, “Does this look like a gun?”

In a March 28th phone interview with the Washington Post, Sacramento mayor Darrell Steinberg said, “There is deep pain and anguish.  It’s our job to bear some of that pain, and to help translate the anguish and grieving and the historic pain [of black communities] into tangible and real change.”  Fine sentiments, I suppose, though at the council meeting Stephon’s brother chided the mayor for, among other things, sitting there with an impassive face, as if nothing had happened.

Stevonte was anything but impassive.  Yet one of the things that has struck me about his demeanor is an almost robotic, staccato rhythm to his motions, especially pronounced as he stood beside Rev. Al Sharpton—jabbing his hands at himself, then at the crowd—as Sharpton spoke at his brother’s funeral.  I know where those rhythms come from.  They come from explosions of rage and overwhelming frustration.  Observe a parent, for example, who’s had to tell a child for the umpteenth time to do, or not to do, this or that, or someone who’s in an argument he’s had with someone a hundred times before and is having again, always back at square one, no progress in sight. “What’s your problem?!  How many times do I have to tell you?!”  You jab the air, you flap your arms, become almost clownish, trying to fight the feeling that no hears you or ever has, no one actually cares that you’re human. There’s terror in that and in that robotic rhythm. 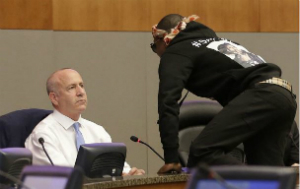 Sometimes you’re met with sentiments like “translate the anguish and grieving and historic pain”—blah, blah, blah.  I’m not suggesting that Mayor Steinberg was insincere, just that he doesn’t get it, as shown when, in the Post interview, he cites as one of the serious flaws in the situation the fact that the police officers apparently didn’t identify themselves as police officers!  As if that would have made things so much better!  In my favorite Toni Morrison book, Song of Solomon, there’s a scene where several black men are sitting around discussing the possible motives of Winnie Ruth Judd’s famous, mad crimes.  They joke about what these might be:

“Amid the jokes, however, was a streak of unspoken terror. The police said there had been a witness who thought he saw a ‘bushy-haired Negro’ running from the schoolyard where the body was found…Each man in that room knew he was subject to being picked up as he walked the street and whatever proof of who he was and where he was at the time of the murder, he’d have a very uncomfortable time being questioned.”  In Stephon Clark’s case there were reports of someone breaking into cars.  There have already been statements—most prominently by California gubernatorial candidate Travis Allen—saying that the whole thing was Clark’s fault because it was clearly him doing damage and the shooting had nothing to do with the color of his skin.  Being riddled by bullets for breaking into cars is in any case still wrong, monumentally, unconstitutionally so.  Nor do I hold the police solely to blame.  The police are most often, I believe, doing the job a particular community wants them to do, and they take on and act out the same fears that community has.  We need to dig deeper and investigate not just the police, but the underlying fears and falsehoods our society still holds about black people.  Allen’s accusation isn’t proven, but his assertion about color being no factor has been proven false over and over and over and over and over again.  That over and over and over rhythm.  Even if it went on, robotically, forever, it feels like it would never be enough and never cause anything to change anyway.

♦ Read about James Baldwin on “The rage of the disesteemed.”

This entry was posted in Reviews & Commentary and tagged James Baldwin, Stephon Clark. Bookmark the permalink.