The Value of Moral Failure: A TEDx Talk by Ryan Dowd

TED is a nonprofit devoted to spreading ideas, usually in the form of short, powerful talks.  The very popular “talk series” began in 1984 as a conference where Technology, Entertainment and Design converged.  Today TED Talks cover topics ranging from science to business to global issues, and independently run TEDx events help share ideas in communities around the world.

The following is a slightly rearranged version of a recent story on the North Central College website.  It reports on a TEDx talk by Ryan Dowd.  Go HERE to see that talk. 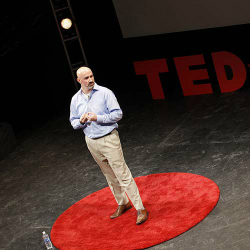 Dowd was the first of 12 presenters Feb. 13 at the inaugural TEDxNorthCentralCollege event. Topics were inspired by the theme “Changing the World for Good.” The message of his talk, titled “The Value of Moral Failure,” was that regrettable moments can help people discover their mission.

“Your finest hour will never help you discover your life’s purpose,” Dowd said. “And the world desperately needs you to discover your purpose.”

Dowd recounted a personal experience from high school when a classmate was being bullied and he could have intervened to help.

“At that moment I was the hero (the classmate) needed,” Dowd said. “Rarely in our lives are we faced with such an obvious case of right vs. wrong, strong vs. weak, good vs. evil. Rarely do we have an opportunity to make such a difference in someone’s life with so little effort … But I turned and I walked away.”

Dowd said that moment of moral failure haunted him for years, but eventually led him to discover his life’s purpose.

“By the standard of my own ethical code I had committed an act of complete and total moral cowardice,” he said. “That realization … showed me who I am by showing me who I never want to be again.”

AYUDA has helped immigrants thrive since 1973.

Dowd has worked as an advocate for immigrants in the United States, traveled extensively throughout Africa performing human rights work, and counseled rape victims and others. He worked for 14 years at Hesed House in Aurora, Ill., most of those years as executive director, and is now executive director of Ayuda, a Washington, D.C.-based nonprofit that provides holistic social, legal and language services to immigrants.