Posted on February 8, 2022 by Richard Guzman 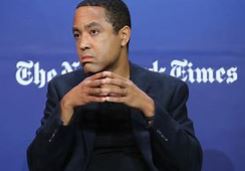 The phrase “Black Lives Matter” was hijacked in ways that helped many Americans avoid, not face, the issue of race.*  Now “Wokeness” has suffered a similar fate.  CNN Business correspondent Allison Morrow writes, “Part of the problem is the way the term, which originates in Black American English, has been appropriated by White conservatives. Where staying ‘woke’ once meant being alert to societal injustices, conservatives often wield the term as a cudgel to disparage progressive ideas regarding race, gender and the environment.”

In fact, there is a lot to disparage about being woke, and what’s gone wrong with the idea exposes the flaws in the ways liberals or progressives have often dealt with race.  One of the deepest looks into this is  John McWhorter’s recent book Woke Racism: How a New Religion Is Betraying Black America.

John McWhorter is the kind of liberal conservatives just love. The Columbia University professor of linguistics, American Studies, and music history is liberal but many of his stances on what he sees as liberal cultural excesses and liberal trends in the fight against racism comfort conservatives.  The fact that he’s a black man saying these things is just icing on the cake.  In Doing Your Own Thing (2003), for example, he took on what he saw as 60’s excesses that degraded language and music.  Yet he’s not just an old-school curmudggeon.  In McWhorter’s fairly recent TED talk on texting, he refuses to say that texting is ruining the language.  It’s changing it, yes, but also renewing language and writing in healthy, powerful ways.  He calls it a linguistic miracle!

Woke Racism is an update of McWhorter’s 2001 book Losing the Race: Self-Sabotage in Black America. Adding the element of calling “Wokeness” a religion, McWhorter takes on wokeness’ religious-like fervor and dogma and its unquestioning call to join that both blinds the new initiates and does potentially serious damage to those the new religion is supposed to help.  As I write on race the presence of my intellectual patron saint, James Baldwin, always hovers near, and I’m reminded that he, too, was very hard on liberals, both black and white.  He felt they hid behind lovely slogans, or took just saying them as a substitute for actually doing something.  He felt they sought a too-easy absolution for the sins of racism and failed to understand the most fundamental needs of black people, needs which in many ways were simply basic human needs that transcended even the harm done by racism. Being “woke” is our most current version of blind liberalism.

In Losing the Race McWhorter says defeatism was the most dangerious legacy of slavery and identifies three elements to it that cause blacks to sabotage themselves in their efforts to overcome racism.  First, the “cult” of victimhood; second, the idea of separatism; and third, a version of separatism, anti-intellectualism—one of whose most damaging, everyday manifestations is students feeling that doing well in school is “acting white.”  Wokeness, now imbued with religious fervor, enforces all three in McWhorter’s view, a view which needs to be taken seriously.  To the extent to which wokeness encourages an instinctive response of defeatism in Black America, or any people of color, it is truly an enemy to be watched.  Woke people need to truly ask themselves to what extent they see blacks and other people of color as essentially victims, as essentially so victimized that separatism is both their identity and a cure for their ills.  Even as useful a book at Robin DiAngelo’s White Fragility has come under fire not only for coddling whites, but, as Ismail Muhammad, writing in The Atlantic, says, “It substitutes consciousness-raising for concrete policy changes, critics argue, and in the process creates a caricature of Black people as hapless victims.”  Woke people also need to constrain the attitude that the facts are so evident we don’t need to think about them, analyze their contexts, study how people react under their pressure.  Not to do so is to substitute blind faith for intellectual rigor and, once again, allow “facts” to lead us to a vision of Black victimhood.

My father used to tell me about being on his way to a library in L.A. in the 1930’s when a white person shouts “Hey, monkey!” at him.  “I thought,” he said, “you’re way more hairy than I and most Filipinos, so who’s closer to monkeys, you or us?”  Part One of these thoughts on wokeness featured a short comedy segment from Trevor Noah. (Use this link to go back and watch it again.)  Noah begins by telling how he’s walking with some friends when someone shouts, “Hey, monkey!”  One of his friends, surely a woke person, immediately says, “Oh, Trevor, I’m so sorry!”  Noah responds, “How do you know it was me?” His gestures and facial expressions suggest that his friend thinks it’s obvious, that it couldn’t possibly be him or anyone else.  In that moment, he reveals that underneath all that wokeness there’s an unchanged sense of blacks as victims and whites as superiors.

To the extent that Woke Racism gives comfort to conservatives by helping them divert their attention from the reality of racism, McWhorter himself has hurt the cause of justice and inclusion.  But to the extent that he makes progressives take a close look at their underlying perceptions of blacks and other people of color Woke Racism will perhaps help us build a world that’s truly equitable, not a world where equity still sits on a foundation of white supremacy.

* In my sermon “Three Things to Stop Saying” I speak about the effects of substituting “Black Lives Matter” with “All Lives Matter.”

♦ Read Part One of this article.  Both are part of a series based on ideas used in the Becoming the Beloved Community workshop.  Go to the series’ LEAD POST and to the Diversity Training and Teaching main page.

This entry was posted in Social Change and tagged Becoming the Beloved Community, John McWhorter, Losing the Race, Woke Racism. Bookmark the permalink.