other works included protecting the Appalachian Trail and banning DDT—this year’s Day was, like almost everything else since March 2020, overshadowed by our Pandemic.  One of the words of the day is the awkward “politicizing.”  Wearing masks, for example, is just beginning to show some signs of not splitting along Republican/Democrat lines, a split which prompted one person to say, “This is as silly as politicizing toilet paper.”  But the silliness continues, and reaches into way too many areas of our life.

Earth Day, too, has suffered increasing politicizing, and we’re caught more than ever between so-called Climate Alarmists and Climate Deniers.  I used to think that 97% of scientists believed in climate change, but I’m assured by friends I trust that that’s not so, a view espoused by many articles such as Forbes’ “’97% Of Climate Scientists Agree’ Is 100% Wrong,” a 2015 opinion article by Alex Epstein.  “If you look at the literature,” writes Epstein,

“the specific meaning of the 97% claim is: 97 percent of climate scientists agree that there is a global warming trend and that human beings are the main cause–that is, that we are over 50% responsible. The warming is a whopping 0.8 degrees over the past 150 years, a warming that has tapered off to essentially nothing in the last decade and a half.”

Of course, Alex Epstein is founder of the Center for Industrial Progress and author of The Moral Case for Fossil Fuels, so I’m right away suspicious.  First of all, 0.8 degrees is fairly “whopping” overall, and according to NOAA, large-scale research, “Basically…confirms what climate scientists have said all along: natural variability…may cause the rate of warming to change from one decade to the next, but global warming is still underway.”  NASA’s Global Climate Change website also confirms a steady temperature increase apart from natural variability. Epstein argues in part that it’s immoral to attempt banning fossil fuels because billions of livelihoods depend on it.  It’s an argument similar to most economic arguments, like ones about growing carbon in the air only affecting wage growth a few percentage points, if at all—so greenhouse gases can’t be that important.  For me Al Gore’s illustration in An Inconvenient Truth resounds more powerfully.  He used a graphic of a scale: on one side was a pile of money, on the other the earth itself.  We’ll continue to have income growth burning fossil fuels but in what world will we be spending that money?  And on what: more and more and more on mitigating an increasingly unstable environment? 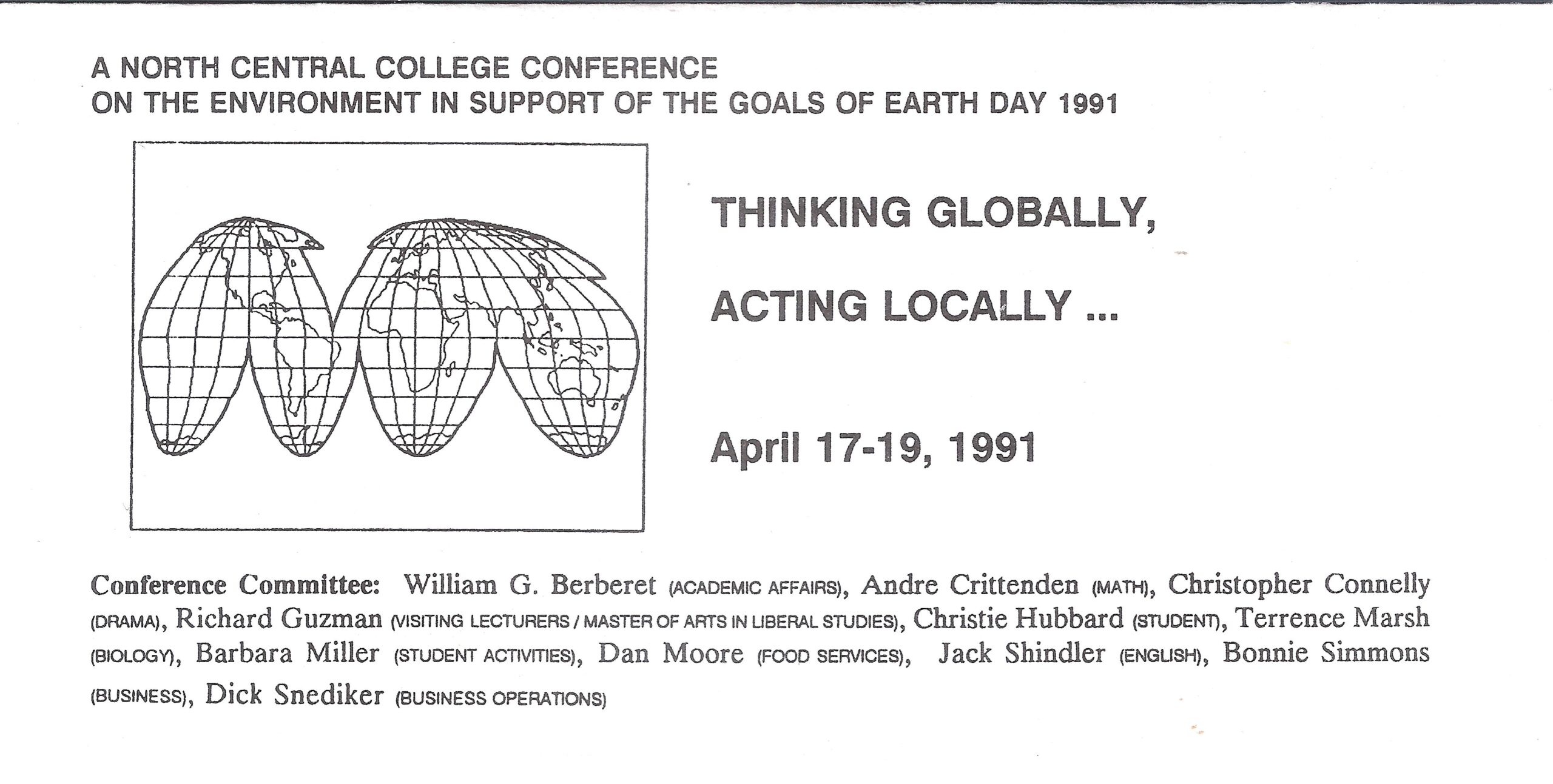 The back and forth seems endless, and I hope a total paralysis won’t result.  At this moment, I’m thrown back 30 years to what seems a more innocent, less politicized time.  In April 1991 I helped put on a conference at North Central College.  We had started holding full-scale conferences in 1989, and earlier that month (April 1-3) had one of our biggest, Image and the Feminine Self, featuring the important writers Carol Gilligan and Stephanie Coontz.  “That’s a lot of pressure. I hope my conference goes half as well,” said our Dean of the Faculty Jerry Berberet, an environmentalist who wanted to get in on our conferencing scene.  Thinking Globally, Acting Locally would occur only two weeks later (April 17-19), and it did go well, with a truly national/global cast of presenters:  Dr. Arthur Sacks (Univ. of Wisconsin, Madison) speaking on “Environmentalism and Perestroika in the Soviet Union”; Dr. John Baldwin (Univ. of Oregon) on “Global Environmental Threats: Perspectives from China, Japan, and the Persian Gulf; Dr. Craig Davis (Ohio State) on “Reaching Those in Power: Environmental Degradation as a Threat to National Security”; Dr. Tim Wood (Wright State) on “The Fate of the Forests: Perspectives on Global Deforestation”; Dr. Desh Bandhu (New Delhi) on “Environmental Issues in India”; and Dr. Alan Schwartz (St. Lawrence Univ.) on “The Environment and the Border: The U.S. and Canada.” There were workshops and even a “Harmonium” where people shared their thoughts in poetry, song, and drama.

The opening lines of the brochure read: “The Earth faces ominous environmental threats—global warming, deforestation, toxic wastes, the recent ravages of the Gulf War.  What the cumulative effects of such threats?…What do Earth’s people need to do to sustain human society in the future? What cab this college and the community around it do to fulfill Rene Dubois’ admonition for the first Earth Day in 1970 to ‘Think globally, Act locally.’”

♦  Go to the lead post in my personal history of significant persons and conferences I helped bring to North Central College.