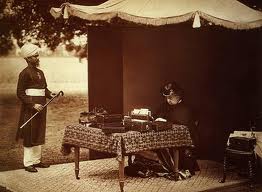 The “First World” of capitalism, the “Second World” of communism, the “Third World” of countries emerging from the imperialism of the first two worlds.  Experts and the general public quibble about terms, and “Third World” leaves much to be desired, though the terms that have replaced it—Southern Hemisphere Countries, Developing World—don’t, in my view, do that much better, if at all.  All developing countries aren’t “South,” and “Developing,” among other things, implies that “development” is an unfettered good, something everyone should want.  So in my course MLS 634 – The “Third World,” I’ve stuck with numbers and always use quotation marks to leave the issue of labeling an open question.

More terms: “Modern,” “Post-Modern,” “Post-Human.”  In the age of globalization (another buzz phrase) “Third World” countries have to weather the social, economic, and cultural storms indicated by these three words, and weathering is something they’ve had to do for a long time (see the picture of Queen Victoria and her attendant above!).  Just like “development,” the “modern” has never been an unrelieved good.  Arjun Appadurai’s book Modernity at Large deals most brilliantly with these complex issues, so it is the cornerstone of MLS 634.  The “at large” part of Appadurai’s title means that “modernity” is now loose in the world, having come unmoored from its beginnings in Western Enlightenment thinking.  Today, on the one hand, aided by the growing prevalence of media, the idea of modernity empowers potentially every person to imagine and re-imagine the contours and content of their lives.  This means more freedom, more opportunity.  On the other hand, impelled by media, it also allows people to imagine communities in ways not always so benign, ways which lead to intolerance, a drive for purity, and even terrorism.

♦  View a sample syllabus of this course.

♦  Watch a video overview of a recent course.

OTHER POSTS RELATED TO THIS COURSE: