Three Story Sandbox—the new release from jazz veterans Scott Robinson, Janice Borla, and Jack Mouse (left to right below)—manages to sound ancient and electronic, avant garde and traditional, world-musicky and rock-solid American all at once, and without sounding like a hodge-podge.  This age of single-song downloads has all but killed-off the concept of a unified album, but I did something I hadn’t done in a while: listened to an album straight through, all 57 minutes of this free-jazz recital, forward-moving and compelling, with Scott Robinson’s ending alto solo providing a wonderful release.

With the exception of some so-called smooth jazz, I’ve loved jazz seemingly forever, even when its standard forms become so predictable: main song theme, then solos—first sax, then trumpet, then piano—followed by the “fours”—various instruments trading solos four (sometimes eight) measures at a time—and finally back to main theme.  Over and over like this, song after song.  But even then you find delight in the cleverness of the improvisation, the mastery of the idiom, and occasionally in a solo breaking-out or breaking-through, and transcending the routine.  You love it when the ensemble groove becomes so together: when they’re “in the pocket,” as we say, even though they’re in the same box.  Or in the case of this new record, when they’re out of the usual box and playing around in another kind.  A sandbox, one chocked full of toys: Ojibway tortoise shell drums, Chinese, Nepalese and Japanese bells and gongs, Navajo cedar flutes, penny whistles, photo theramins.  These supplement Jack Mouse’s regular drum kit and Scott Robinson’s saxes, cornet, and guitar.  Then there’s Janet Borla’s voice which grounds us with her as-usual exceptional scat singing.  She reminds us that this free-jazz stew—with rhythmic and melodic fragments sticking out and sticking in everywhere—hasn’t left traditional jazz behind.  At the same time her voice manages to sound like electronic hisses, shaken shells, and, most of all, whispered hints that complement and stick together all the free-floating musical elements. 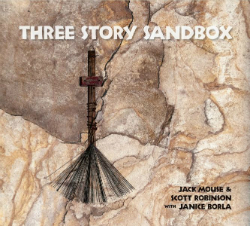 The album begins with fragments of rhythm from shells, shakers, gongs, and sticks, over which both skittish and long, sometimes ghostly flute fragments dart and float.  The second number follows with little or no break, beginning with gong strikes, perhaps reflecting the song’s title, “The Forge.” Then Jack Mouse’s ever-inventive rhythms begin resembling electronic pulsing and white noise, which Robinson answers with jagged, squiggly sax sounds before Borla enters.  She alternates between fleet be-bop scat riffs, breathiness, and longer, bluesier fragments of melody that both remind us we’re still connected to traditional jazz while also echoing the Navajo flute sounds of song one.  These first two songs lay down a pattern the rest of the album elaborates on throughout the unified first seven numbers (called the “Sandbox Suite”) and continues to detail and develop in the next nine, more distinct numbers beginning with “Slap Happy” and ending with “Hand Blown,” before the final number, “Scott Free,” provides the release I mentioned earlier. 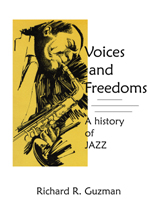 In my first book, Voices and Freedoms (see the link below), I proposed understanding jazz history by following two dimensions: first, Form—something that changed to become looser and lead towards more “freedoms,” and, second, something that didn’t change: Voices—the human voices infusing jazz instrumental sound and signifying a warm, caring, struggling humanity—a humanity compelled to express its persistence, even its triumphs, despite the heaviest trials.  Janice Borla’s magnificent voice testifies to this unchanging presence throughout the album, but in a way the most human voice comes at the end when Scott Robinson’s sax goes it alone.  The first song “The Summons” called us to journey and explore.  “Scott Free” sounds like a benediction signaling both end and beginning.

I had one criticism of the album as I listened the first time.  I would have liked seriousness and playfulness to have been more evenly balanced.  Though much, much different in mood, the arc of the album reminded me of Coltrane’s A Love Supreme, which begins with an “Acknowledgement” of the need to journey and to pursue love more deeply, and ends with a “Psalm” resolving the search and promising new life.  That’s obviously heavy stuff, and many elements of the avant garde idiom—rhythmic inventiveness, fragmented musical lines, a tone often more somber than playful—sometimes lead the music to sound more serious than it may actually be.  That seriousness was part of the reason this album was so riveting, but it didn’t quite jibe with the “Sandbox” title, until my wife Linda—probably watching my wide grins—shouted at me from across the room, “Looks like you’re having too much fun over there!” and we remarked, simultaneously, how much the music reminded us of Chicago’s old Velvet Lounge at 21st and Indiana—a temple of free jazz flanked on one side by Harold’s Chicken Shack, and on the other by Fitzee’s Ribs.  We like to say our kids practically grew up there, sometimes mesmerized, sometimes lulled to sleep, by free form jazz and world music improvisations sometimes lasting 45 minutes or more.  “If you could see them play Three Story Sandbox, you’d catch all the playfulness you need,” Linda said.  “Just think of Jack smiling, and the faces Janice would be making.”  That snapped it all into place, balancing seriousness and playfulness more dynamically in my mind.  I listened again, this time catching all the playfulness I had missed the first time around.  Of all music, jazz just has to be live.  You have to at least imagine seeing them played live to hear great jazz records fully.  Here’s hoping that more and more of this free jazz pops up in the live concerts these wonderful musicians are in the habit of playing.

♦ Go to the main page for Voices and Freedoms.

♦ Go to a sample of the Voices and Freedoms radio series, this one an excerpt from show #14 on Ornette Coleman, a pioneer of free jazz.