Toni Morrison: Playing in the Dark 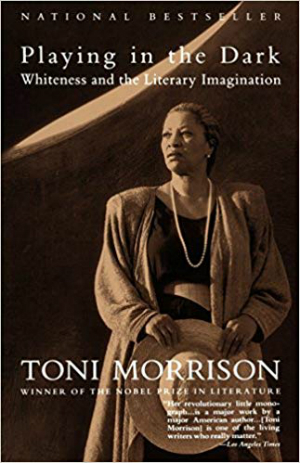 This title does say it all.  Toni Morrison’s Playing in the Dark: Whiteness and the Literary Imagination focuses on the construction of whiteness in American literature, one of the central places America tries to establish itself as new, white, and male. What’s the basis of this construction?  White writers playing in the dark—that is, using, or reacting to, or trying to erase a black presence. “Black slavery,” she contends, “enriched the country’s creative possibilities,” creating “a playground for the imagination,” a place “to ally internal fears and to rationalize external exploitation” through an American Africanism, “a fabricated brew of darkness, otherness, alarm, and desire….”

In 1983, at a friend’s suggestion, Toni Morrison began reading Marie Cardinal’s memoir The Words to Say It, a description of her descent into “madness,” her therapy, and the process of her healing.  Morrison had been fascinated for a while in, as she says, “the way black people ignite critical moments of discovery or change or emphasis in literature not written by them.”  Sure enough, Marie Cardinal first realizes she’s losing her grip when she’s at a Louis Armstrong concert, and pinpoints the moment her sickness—which she calls the Thing—took full root in her when she, a white Frenchwoman raised in Algeria, “understood that we were to assassinate Algeria,” which she considered her black mother. Morrison’s reaction to Cardinal impelled her to put together her thoughts, which first took their form as the William E. Massey, Sr., Lectures in the History of American Civilization she delivered at Harvard.

As she thought about iconic American writers, “What became transparent,” she writes, “were the self-evident ways that Americans choose to talk about themselves through and within a sometimes allegorical, sometimes metaphorical, but always choked representation of an Africanist presence.”  This choking, this attempt to evade race within the literature itself and in the literary criticism purporting to illuminate it is itself an act of racism. The African presence informs American literature, often as a shadow even when the piece in question is not even about race issues.  Hemingway, for example, is often thought to be a fairly race-free writer, but as she pointedly proves in her reading of Hemingway’s To Have and Have Not he most certainly is not free of race, but depends on it to construct his famous versions of manhood, the rules of male/female relationships, virtually his entire aesthetics. Before him, she considers the likes of Cather, Poe, Twain, and Hawthorne.  She proposes, as a list of topics needing critical investigation, first how the Africanist character is a surrogate and enabler allowing white writers to think about themselves.  “Note, for instance,” she writes, “the way Africanism is used to conduct a dialogue concerning American space in Poe’s The Narrative of Arthur Gordon Pym, where Poe “meditates on place as a means of containing the fear of borderlessness and trespass, but also as a means of releasing and exploring the desire for a limitless frontier.”  In general, for white American writers their version of an Africanism, a black presence, “serves as a vehicle for regulating love and the imagination as defenses against the psychic costs of guilt and despair.  Africanism is the vehicle by which the American self knows itself as not enslaved, but free; not repulsive, but desirable; not helpless, but licensed and powerful; not history-less, but historical; not damned, but innocent; not a blind accident of evolution, but a progressive fulfillment of destiny.” 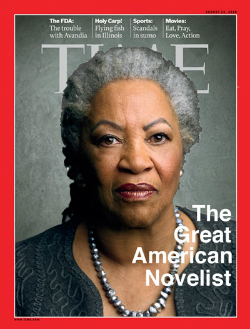 I have often said that Americans would rather talk about anything—literally anything—but race, but that’s not exactly true.  For in shunning an open discussion in all the deep, clever ways they do, Americans really condemn themselves to thinking, or feeling, even speaking race all the time, inside. It’s some nagging thing you wish would go away, but you realize is also something absolutely central to your identity.  As James Baldwin once wrote—and, once again, I find many of his thoughts central to Morrison’s argument, as they are to most black writing after the 1950’s—“As is the inevitable result of things unsaid, we find ourselves until today oppressed with a dangerous and reverberating silence; and the story is told compulsively, in symbols and signs, in hieroglyphs.” Playing in the Dark is a brilliant decoding of those symbols, signs, hieroglyphs in the work of white writers.  It’s a major statement from one of our greatest writers, laying out a major challenge to re-think American literature.  Morrison’s language is creative and lyrically gorgeous, fully like you’d imagine a Nobel Prize winner would write—she won the Prize in 1993—but also so critically precise and penetrating you think you’ll never go back to reading normal literary criticism again, a criticism that—as it ignores or slights blackness—too closely reflects the actions of American culture in general.

♦ Go to a list of Black Writers on this site.  Most of them, though not Morrison, are from my book Black Writing from Chicago: In the World, Not of It?

♦  Go to a list of Reviews on this site.

This entry was posted in Black Writers, Writing and tagged Black Writing from Chicago: In the World-Not of It?, Playing in the Dark: Whiteness and the Literary Imagination, Toni Morrison. Bookmark the permalink.