Turning a Corner on Racism

In 2002 I was asked to write a piece for the Daily Herald on the “state of race relations.”  This was the result. 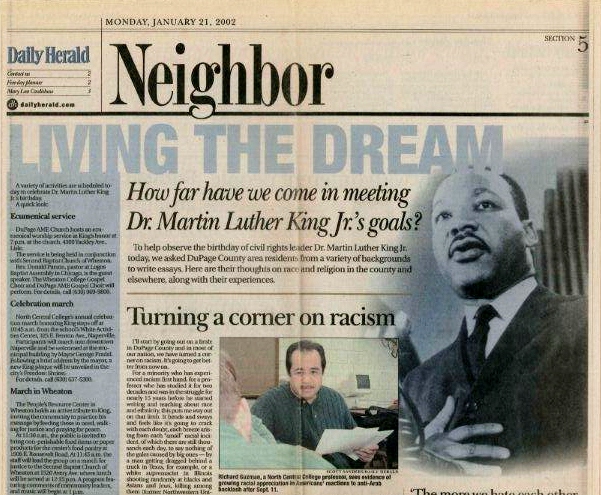 I’ll start by going out on a limb: in DuPage County and in most of our nation, we have turned a corner on racism.  It’s going to get better from now on.

For a minority who has experienced racism first hand, for a professor who has studied it for two decades and was in the struggle for nearly fifteen years before he started writing and teaching about race and ethnicity, this puts me way out on that limb.  It bends and sways and feels like it’s going to crack with each doubt, each breeze arising from each “small” racial incident, of which there are still thousands each day, to say nothing of the gales caused by big ones—by a man getting dragged behind a truck in Texas, for example, or a white supremacist in Illinois shooting randomly at blacks and Asians and Jews, killing among them Northwestern University basketball coach Ricky Birdsong.*

On October 25, 1989, I published an open letter titled “Racism Is Alive and Well in Naperville.”  In it I mentioned a bunch of white kids driving by me and yelling, “Go back where you belong!”  I agreed with someone who said racism was so deeply rooted in our society we’d never get it out.  “If Desmond Tutu were walking down the streets of town,” I ended, “and people didn’t know who he was, or that he’d won a Nobel Prize, I’d tell him to watch out for people shouting at him from passing cars.”  I still stand by the title and nearly every word of that letter, except these: on most days back then I thought that racism would be the thing that might finally bring our country down.   I think that on fewer days now.  Why?

Most social change involves activism and gradualism.  Activists often denigrate gradualist for moving too slowly, and it’s true that to change something someone usually has to stand up and actively jar the status quo.  But what activism starts gradualism usually finishes.  The 2000 census is clear. There are simply more and more people of color around and it’s going to be harder and take more energy to be racist in a society that’s becoming so diverse.  Since our nation has been multicultural from the very beginning, and people of color have contributed significantly to it in proportions far, far larger than their actual numbers, it’s about time that the numbers start catching up too, and that the awareness of their contributions in all areas of our national life also grows.

After our spy plane incident with China I know that many Chinese-Americans got threatening phone calls, and one poll showed that over 50% of Americans felt Chinese-Americans were more loyal to China than the United States.  That was such a low time, and I felt we were back at square one.  After September 11th I, and I would guess every minority in this country, was glad if they had an American flag to hang out the window, not only to express unity and sympathy in a time of tragedy, but also for whatever protection we thought it might bring.  But I also noted that for every backlash against Arab-Americans there seemed to have been about an equal or greater defense of their difference and their status as Americans.  Maybe, I thought, more Americans are starting to fight racism as activists.  Maybe we are beginning to realize what a dangerous thing doctrines of racial and ethnic purity are.  Sometimes you can understand your strengths better by observing what your enemies say they hate about you, and in terms of race and ethnicity what fundamentalist extremists hate, what confounds them, is this impure mix of differences that somehow coheres.  That mix is something to get absolutely patriotic about.

On February 23, 1998, I delivered a comprehensive diversity plan from a committee I had chaired to the school board of Naperville Community United School District 203.  (See the plan brochure HERE.) Over the next few days I presented the plan to the community at five town hall meetings.  Scheduled to last only 90 minutes, they all ran over time, the first one engendering a three-hour battle.  There are, and continue to be disagreements, mostly honest, about whether America is a colorblind society or not, and about the place of difference in our world and how to handle it.  About a year ago I heard rumors that the school board might be considering rescinding the plan, and several students began to ask how I felt about the fate of “my” plan.  One night a graduate student, who is also a teacher in District 203, came to me and said it really wouldn’t matter if the plan itself were rescinded because he, like so many other teachers, were already so committed to teaching diversity that they would just continue.  That was the first time I began thinking about a corner being turned, a historical tide turning.  Square one is still too close, so the plan still matters, but great forces may already be sweeping us into a future where diversity is so surely and respectfully embraced that racism finally seems not just inhumane, but something stupid from some dark age.  District 203’s new social studies curriculum now lists diversity as one of ten major civic virtues.  Would removing it from the list alter the tide?

I was asked to give suggestions for how we could improve racial conditions.  Here are some general ones.  First, work in and support programs and policies that target systemic or institutional racism, the invisible racism that resides in the very structures of our institutions and neighborhoods.  On a more personal level become more diverse yourself in whom you know, what you read and do, even what you eat.  Third, Americans—especially white Americans—are the most privileged people in history.  We’re spoiled, in fact, and among other things must begin dealing seriously with our overweening materialism.  Privilege is the hardest thing for people to hear about, but dealing with it and these other things will make you a more activist part of a great historical change.  Begin to hope, or keep hoping.  Racism is still alive and well; we have a long, probably never-ending, way to go.  That’s why it’s scary out this far on this limb, but the view from here may be improving.

* Note, June 2017: As I was preparing to re-post this piece in 2013, more than ten years after it was written, a neo-nazi had just gone on a killing rampage in a Wisconsin Sikh temple. Trayvon Martin had been murdered a year earlier, and Michael Brown’s murder was still 2 and a half years away, to be followed shortly after by Laquan McDonald, Eric Garner, Freddy Gray, Philandro Castile, the Charleston church shootings, etc. etc. etc.  Not to mention increasing wealth disparities disproportionately affecting racial minorities, wildly disproportionate incarceration rates for racial minorities, a persistence gap in educational opportunities, etc. etc. etc.  Shortly after this piece was originally published, several people pointed out that while I tried to sound positive, much of the article was spent qualifying my optimism. Still, now a decade-and-a-half later, does it sound more and more and more quaint—or not?  Two days after re-posting the article above, I wrote about Chris Rock, who thought “Racism was almost over.”  He thought the current s**t storm of racial hatred an encouraging sign.  Depends a lot on whether you think our present racial turmoil is the renewal or the beginning of the end of White Supremacy.  In February 2020, speaking at a convocation on race, I said that IF we worked hard we might see a less racist U.S. in 40-100 years.