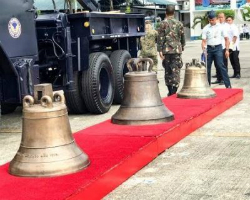 The Balangiga Bells arrive in the Philippines.

The VIDEO below from The World Tonight * reports on the return from the U.S. to the Philippines of the Balangiga Bells, one of the most infamous symbols of the Philippine-American War, which raged brutally from 1899 to 1902.  After centuries of Spanish rule, the Philippines had expected independence after the U.S. victory in the Spanish-American War.  Filipinos had fought side by side with Americans to gain that victory in the Philippines, but suddenly the U.S. had other ideas.  It would not grant independence, but would embark upon an era of imperialism, and the bloody war ensued. To Filipino nationalists, it continued the fight for independence from Spain begun in 1896.  Americans regarded it as an insurrection.

On July 25, 2018, graduate student Bea Rodriguez-Franzen turned in a short paper (read it HERE) for my course on the “Third World.”  Titled “Brown Man’s Burden: A Commentary,” it focused on the decades-long attempt by the Philippines to have the U.S. return three bells: the Belangiga Bells, which were taken as war loot from perhaps the single bloodiest series of events in the Philippine-American war.  On November 15, 2018, roughly three months after she wrote the paper, the U.S. finally returned the bells.

The paper and VIDEO provide context and details on the Balangiga tragedy, as does a good Wikipedia article.  Because of these, I will only sketch it briefly here.

New York Journal, May 5, 1902. A vulture replaces the bald eagle on American Shield. Bottom caption reads: “Criminals Because They Were Born Ten Years Before We Took the Philippines”

“The Balangiga Massacre” originally referred to the killing of 48 American troops in the early morning of September 28, 1901, on the Island of Samar after a series of events—including the sexual assault of a Filipino woman by some American troops, the rounding up of 143 Filipino males for forced labor, and the confiscation of homes and crops.  The bells were rung supposedly to warn the troops of the attack by townspeople and tribesmen. But what followed is what the majority of people now call the real Balangiga Massacre.  Gen. Jacob A. Smith—nicknamed “Howling Jake,” or “The Monster,” or “Hell Roaring Jake”—ordered American forces to make the entire island of Samar a “howling wasteland.”  His most infamous order was condemned in the editorial cartoon at left: kill all males 10 years of age and older.  In the end, hundreds of villages were burned, and some 50,000 Filipinos killed.

In her paper Bea Rodriguez says the Philippine-American War itself, let alone the Balangiga Massacre, was left out of her history education, and she asks why it took so long for the U.S. to return the bells.  In some ways, the answer is obvious.  It required admission of a war crime—though, of course, this “admission” really wasn’t one, couched as if was in terms of “returning respect” and strengthening the bonds between two great allies.  Gen. “Howling Jake” was, in fact, court martialed and convicted for his orders, though the only punishment he ultimately faced was being forced to retire from the Army.

Ironically, the two Presidents under whom the Balangiga Bells were returned were Donald Trump and Rodrigo Duterte, two leaders not known for de-escalating crises.  Both appear briefly in the VIDEO below.

Bea Rodriguez’s paper title refers to Rudyard Kipling’s famous poem “The White Man’s Burden,” which I write about HERE by way of introducing the paper of another graduate student, Janie Doutsos.  I begin this post by writing, “I had forgotten that Rudyard Kipling wrote his remarkably racist and smug poem to encourage Americans as they took over my homeland, the Philippines.  The ‘burden’ white men take up is the burden of civilizing the world.”  As the Balangiga Bells remind us yet again and again and again, “civilizing” people has often entailed murdering them by the tens of thousands, a process which throws dark questions on the word “civilization” itself.

* The World Tonight is a Philippine late night news cast airing on the ABS-CBN news channel.

♦  For more on Philippine culture begin with my article on one of its greatest National Artists, the writer N.V.M. Gonzalez, where I early on make reference to Americans calling Filipinos their “little brown brothers.”  Bea Rodriguez’s paper remarks about Americans soon turning to killing their little brown brothers during the Philippine-American war.

♦  Go to “Bayan Ko” for a great patriotic song that came out of the Philippine-American War, and go HERE for a reflection on and an index of writings about the Philippines on this site.