Posted on December 7, 2012 by Richard Guzman 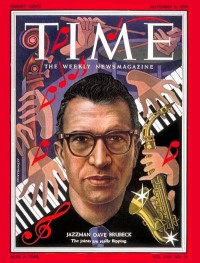 For me the two coolest instrumentals to ever make the pop charts are “Take Five” by the Dave Brubeck Quartet and “Green Onions” by Booker T and the MG’s. They’ve always been a pair for me, bookends, so I’ve thought a lot about both of them for the past hours upon hearing the news that Dave Brubeck passed away on December 5th, just one day shy of his 92nd birthday.

Jazz, many say, is rooted in the blues, and many jazz greats were also great blues players with an innate sense of blues form and tone. But the bluesiness of “Take Five” comes from Brubeck’s great alto saxist Paul Desmond, not Brubeck himself, who wasn’t a great blues player. “Conscious of how easily the listener can lose his way in a quintuple rhythm, Dave plays a constant vamp figure throughout,” says Steve Race in the liner notes to the famous Time Out album which contained Brubeck’s biggest hit. He doesn’t solo at all on “Take Five.” And when he did solo, his rhythms often got chunky and he tended to hammer away at things. Brubeck leaned not towards the blues but towards that often suspect project of combining jazz and “classical” music. Taught by the likes of Darius Milhaud, Brubeck’s piano forebear is as much—probably more—Chopin as Jelly Roll Morton or any other of the great jazz pianists. That Brubeck became the face of jazz in the 50’s and 60’s, landing on the cover of Time magazine in November 1954, caused chagrin on the part of many jazz officionados—especially those who loved blues. But Americans have always had a problematic relationship with the blues, tangled as that music is in issues of race. We’d rather talk about anything but race, and it took the Brits to help us even begin acknowledging the greatness of our blues heritage.

It’s no wonder, then, that Brubeck’s non-blues jazz took the nation by storm, and it’s fair to say that Brubeck still might be the face of jazz for many Americans. His “experiments” in odd time signatures—though these weren’t as complex as other things going on in jazz, and people never did “lose their way” in the 5/4 lilt of “Take Five”—did refresh the public’s taste for jazz. Also, as it turned out, his sledgehammer piano style formed a perfect counterpoint to Paul Desmond, one of the most fluid, lyrical, floating saxophone players in jazz history. The contrast often proved transcendingly exciting. Brubeck’s Carnegie Hall concert remains one of the great live albums in all jazz.

I love Brubeck. I don’t want all this hemming and hawing to convey otherwise. But my hero was Ray Charles, and as much as I loved “Take Five,” I loved “Green Onions” more because it was closer to Ray Charles’ kind of blues. As a young piano player I tried to play like Ray, but at my high school part of my notoriety was as the guy who could actually play “Take Five”—though I did it in another key because the fingering was easier. Even before my teens, I was a Brubeck fan. One of my strongest musical memories is hearing them at some hall and going up to them afterwards. Paul Desmond was aloof, drummer Joe Morello seemed kind of spaced out, but the person I really wanted to meet was Gene Wright, the bassist. He was black, and I always thought with some relief that at least there was one black face in the greatest jazz band in America. “Gene Wright,” I mumbled as he shook my hand and said, “What’s your name, son?” “Gene Wright,” I said. “What’s that?” he shot back jovially. “Gene Wright,” I said again, then recovering from my reverie, fumbled, “No. No. You’re Gene Wright. My name’s….” But before I finished he had turned away, laughing, tickled by my star-struckedness. I then turned to my right and there was Brubeck. I have yet to shake bigger or softer hands than Brubeck’s. His smile seemed both all-encompassing and directed only at me, and when I told him how much I loved his music, he said, “We’re thrilled that you do.” I knew he meant it. To this day he sets my standard for someone “important” being that approachable and…nice.

Much as I love “Take Five,” though, the Brubeck piece I listen to most—almost once every other week for the past 40 years—is his “There’ll Be No Tomorrow” from his Bossa Nova USA album. Unbelievably beautiful and serious to me, it also summarizes the central strengths of his music and each member of his classic quartet. A middle tempo ballad, it starts with Brubeck hammering out—but with delicate staccato, if that makes sense—the haunting melody before Paul Desmond delivers one of his most beautiful solos. Joe Morello uses brushes throughout, swirling and tapping accents as Gene Wright anchors everyone onto his deep bass foundation. At 2:20 into the piece Brubeck softly plays a dissonant chord into a silent space in Desmond’s solo. My wife thinks I’m such a nerd for waiting so reverently for this moment and reacting so strongly when it comes and goes. Then it’s Brubeck’s turn to solo.  He begins gently enough, but, of course, he’s soon hammering away, though he’s spreading out the melody and deconstructing the tune’s chord structure beautifully. Then shades of his classicism enter. Morello drops out, and Brubeck continues with only Gene Wright’s deep notes guiding him as he slows down the pace more, then more. Then as Wright drops out Brubeck begins to go as liquid as Desmond. “Most jazz ballads owe a debt to Chopin, another influence from outside jazz that has become deeply entrenched in its language,” Brubeck himself writes in the liner notes to Bossa Nova USA (1963). Now he’s flowing in his own way, where he’s most at home, creating something as beautiful, to my own mind, as anything Chopin ever did. Over smoothly rippling eighth-note arpeggios in his left hand, the tune’s melody sings once again, interspersed with 32nd-note arpeggios, sparkling and precise. The music rides to a quiet, profound end, for me the very definition of how sadness, beauty, and hope entwine.

I’m ending this post with an excerpt from “There’ll Be No Tomorrow” to give you a brief taste of what I was trying to describe.  Click the video button below and enjoy.  Then I invite you to hear my jazz trio.  I’m around 17, so this recording is like 45 years old!   My piano influences are mainly people like Ray Charles, as I said, and Ahmad Jamal, but here, while Jamal peeps through, it’s almost 100% Brubeck—at least a 17-year-old’s poor, halting tribute to one of his musical idols.