Unpacking Racism: “Noble” Sentiments that Keep Us from Talking About Race

This is the Lead Post in a series of articles based on “Unpacking Racism,” the theme of the 2020 Laity Convocation of the Northern Illinois Conference of the United Methodist Church, held on February 8, 2020.  I and three other panelist—Rebecca Fraley, Judy Siaba, Chris Pierson—plus moderator Rev. Alka Lyall, spoke and answered questions on race.  See end of post for links to other articles in this series.

For years I have written and said that Americans would rather talk about anything—absolutely anything—but race.  So when Mark Manzi was coordinating the panel discussion for the 2020 Laity Convocation and suggested topics each one of us might speak to, I immediately chose the questions: Can we even talk about race?  Isn’t that racist in itself?  Such questions, I said at the event, are classic ones we use to avoid talking about race and imply that race isn’t very serious or important and, finally, that racism is so easy to solve it will just go away if we ignore it.  But we talk about everything…unless we’re too scared to face it.  Let’s just think about physical ailments, I said.  Will not talking about cancer make it go away?  If our grand child gets a tiny cut or scrape don’t we at least try to say something comforting?  We rarely remain silent, but it’s one of our deepest American wishes that silence will make racism go away.  That simple.

There’s a naivete to these questions.  Other things we say to avoid talking about race, however, don’t sound naïve.  In fact, they sound noble.  Two of the noblest statements came up during the panel and in the questions asked afterwards.  One attendee suggested we were being dismissive to criticize them.  They are:  “I don’t see color” and “We’re all human.”  First, I want to say that in many cases I know these statements are said with good will.  For years I’ve taught graduate courses on race and ethnicity to teachers who earnestly—and, again, with good will—say they only see students who need good teaching and affirmation and grounding in our common humanity. They don’t see color, they just see human beings. 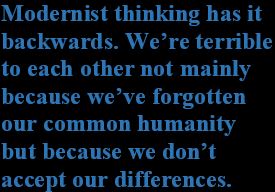 These two statements, taught to them by other professors—mostly of good will—are the legacy of modernism, a complex system of thought that, among other things, sought to find something solid to stand on amid the chaos and carnage of Western wars starting in the late 1800’s, leading through the horrors of the Holocaust and Vietnam, and hundreds of other conflicts, many continuing to this present moment.  People wanted universal principles of good conduct that would eradicate our differences.  The thought was: we perpetuate horrors upon each other because we focus too much on differences, not on our common humanity.  That’s true to some degree, but the emphasis is almost backwards. We’re terrible to each other not mainly because we’ve forgotten our common humanity, but mainly because we don’t accept—even embrace—our differences.

Our strongest human bonds are made with those whose differences we’ve accepted, not with those we affirm our common humanity with.  Doing the latter is easier because it presupposes you already recognize their humanity, which usually means you think they’re already enough like you.  Jesus asked (Matthew 5:46), “If you only love those who love you, what reward will you get?”  This principle works out in everyday life all the time.  How many times (a lot!) has a young man come into my office deliriously happy because he’s found the girl of his dreams.  “We’re so much alike! It’s like we’ve known each other forever! I don’t even have to finish my sentence; she already knows what I’m thinking!” etc. etc.  And two months later he comes back, dejected, saying, “I thought I knew her.”  It’s over because he found out she was actually a different person, not a clone of him, and couldn’t handle it.  I say to those teachers who don’t see color: My goal is to make you see color.  However, when I’ve tried to make people see color, whether in class, or in other arenas—like when I led in writing the Diversity Plan for Naperville School District 203—I’ve gotten hit over and over and over with the “I-don’t-see-color” bat.  If we’re ever going to deal seriously with racism, the swinging of that bat has to stop.*

The evidence is absolutely overwhelming: color matters.  There’s no way I could italicize or bold that statement enough.  Color—“whiteness” in particular—gives astounding privilege to some, but places absolutely enormous, untold disadvantage on “people of color” in virtually every aspect of their lives.  And saying “I don’t see color” or “We’re all human” are, finally, noble-sounding versions of “Isn’t talking about race racist?”  It means, “I myself don’t have to talk about racism, I’m innocent.  (And my family didn’t own slaves.)  We’re all human.  All the same.”  But we’re not all the same.  We’re different—sometimes really different.  Deal with that first, and maybe someday we can embrace our common humanity, a humanity that’s precious not because we’re all alike, but because “being human” means being able to embrace human diversity.

*  For more on being “hit by the bat of color-blindness” see articles like “Race aside…” (partly about the killing of Trayvon Martin), and “Peggy McIntosh’s Invisible Knapsack.” Also go to the Teaching Diversity page on this site.

♦  ARTICLES IN THIS SERIES: