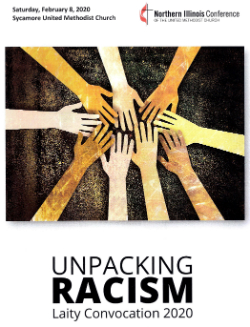 This article is part of a series of posts based on the 2020 Laity Convocation of the Northern Illinois Conference of the United Methodist Church.  Go to the Lead Post in this series for a complete list of articles.  Below is an answer to one of the audience’s questions: What steps can individuals and churches take now?

There’s nothing new or special about this list of practical steps to fight racism.  The suggestions fall into four categories, all of them important.  I’ve often heard people say we must get beyond learning about food and customs, my third category, but it also has an  important part to play, often providing a starting point more people are willing to try. What’s crucial is starting somewhere, eventually engaging all four kinds of steps, and, most important and difficult, sustaining those steps over years.  One-off actions certainly don’t cut deeply enough, but neither do actions lasting just a year or two.

At the Laity Convocation I said that in 40 to 100 years, IF we’re diligent, we might start to lessen racism in the U.S.  One panelist thought I was being too optimistic.  I was.

But hopeful things are afoot in the United Methodist Church.  It’s had a Commission on Religion and Race for years, but within the last year a Taskforce on Racism has formed, and a larger Anti-Racism Champion Team attached to that Taskforce, to more pointedly begin to help dismantle racism in churches and society. It will do much to help us study and train and put that new knowledge into action. Wish us luck, but even more, wisdom and sustaining grit.  AS A FIRST STEP, you could look for assessment tools to come from the Taskforce shortly and consider using them at your church.

A word on tone.  Racism has hurt more people than it’s possible to count, and this includes—though not as directly and viciously—those who have perpetrated racism on others, consciously or not.  Yet I’ve kept the tone here relatively light. The mountain we have to climb is so big I figured it would be better not to start by weighing us down.  There’s much deep, soul searching work to be done, and the next 40 years may be presenting us with a window of opportunity as big as the Civil Rights Movement did from the early 50’s to the early 80’s.  More about this later.  Hopefully, this list of steps may lead to the deeper issues we’ll need to face.

Finally, each category has its own area it seeks to increase—that is, respectively: knowledge, social change, cultural competence, and personal relationships—but each category should also be seen as contributing to a greater ability to talk about race.  One reason we’d rather talk about anything but race is simply that we don’t know how to talk about it very well.  Race sparks more feelings of anger, defensiveness, guilt, shame, helplessness and hopelessness than just about anything; and such feelings make it hard to  talk honestly and think constructively. Approach each category below with a view both to confront these feelings and get past them. 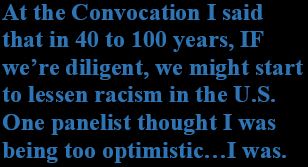 1) Study.  Lots of books to read, videos to watch, articles to examine, training sessions to attend. Today it’s become popular to be trained about our implicit biases, for example, and Peggy McIntosh’s classic “Invisible Knapsack” essay shows how racism pervades our everyday life, even in ways we think are simple and harmless.  Speaking for myself, I’d say the deepest place to start is the work of James Baldwin, who wrote and spoke about race more deeply and passionately than anyone I know.  I’d start with Notes of A Native Son, but lots of great material from many others has come to us at an increasing pace for decades.  More details in later posts.

2) Social Change.  Support an organization fighting racism and its effects, and, if possible, be involved beyond just contributing money.  The chances for that would be greater if the organization were local, though the national ones sometimes offer opportunities for local involvement as well.  For example, readers of this site know about Emmanuel House, founded by my oldest son, Rick, and his wife Desiree as a living memorial to his youngest brother Bryan Emmanuel Guzman.  In 2016 it was named one of “The Top 100 Most Innovative” social change organizations in the world, and in 2018 merged with long-time partner The Joseph Corporation to become The Neighbor Project.  The focus of these organizations is to build financial and community stability through home ownership.  The short video “The Racial Wealth Gap” (the very first episode in the Netflix series Explained) spends significant time on how racism was sustained through restricting who and where people could own homes, and how home ownership contributes significantly to reducing poverty and the racial wealth gap.  You can watch it at the link above, and read about it in my own article “The Racial Wealth Gap and Home Owndership,” where Emmanuel House/The Neighbor Project are highlighted. Get involved in organizations like these, or start a program at your church, like workshops for those working towards American citizenship, or—since voting matters—voting registration drives.  It follows that making voting fair and truly representative is a next step. There are systemic problems with this, including disenfranchising people of color and drawing unfair voting districts to assure that people in power stay in power.  And it hardly needs saying, as I’m adding to this post just days after George Floyd’s murder, that becoming involved in police reform is of crucial importance.  These first two categories should result in a greater appreciation of systems and systemic racism.  The list of social, political, and mental systems keeping racism alive is long, and rooting them out takes years—decades—of persistent work.

3) Cultural Events. Intentionally go to events, restaurants, music venues, places ofworship, and more, which put you in environments different from yours.  As I mentioned above, sometimes this category is spoken of in terms of gaining “cultural competency,” which is often spoken about as gaining the “four E’s:” Exposure, Experience, Education, and Empathy.  We’ve touched on the first three E’s, in slightly different order, in the first three categories here, and we’ll get to the fourth below.  My church had a program called Cultural Crossings, which we’ve talked about reviving.  It did all-church programs on Ethnic Cooking, on different Christmas Traditions, and, the one I remember most, on Coming to America, where members from Ghana, the Philippines, Sweden, and more, shared their (or their ancestors’) journeys to this country and their reactions upon getting here.  Attendance was always good, but especially packed for this program.  Hearing stories is tremendously important, and maybe even more so for the next category.

4) Friendship.  Get to be as close a friend as possible with someone of a different race or ethnicity. Deborah Plummer’s Racing Across the Lines: Changing Race Relations Through Friendship would be a good guide and another book to study deeply.  Read my review at the link just above, and note her response to it.  The book contains two important lists—one for whites, one for people of color—which, she says, could lead to the “interracial marriage of Americans.”  Even at my church, one of the most multicultural in America, we could do a much better job getting to know each other better across racial and ethnic lines.  I’ve spoken with our pastor and another church leader about maybe starting a program of “Diversity Dinners,” where our members could simply get to know each other better.  Plummer says lack of cross-racial friendships is one of the biggest things keeping racism in place.  But creating these naturally is difficult.  You can’t force real friendship, but if you happen to know of one across racial lines, it would be good to “study” it. Ask those friends how it happened, then try to replicate, as naturally as possible, similar circumstances where inter-racial friendships can happen.  This is where sharing stories comes in.  Friendships often start by knowing seemingly small things about each other: our favorite dessert, where we were born, where we got our name….  But they deepen, and empathy—the fourth “E” above—is born when we share our stories, especially those where we’ve experienced hurt or harm.  Certainly those who experience racism feel hurt and harm, but often perpetrators of racism became that because of hurts and harms of their own, sometimes not directly related to race.

You can do these actions by yourself or organize a group, and, indeed, each action would go further if it were done in groups.  So #1 above, Study, could be done as a class, or book club, or even a conference hosted by your church.  One thing could grow out of another, too.  For example, we know of a family who signed up to help a refugee family who just happened to be living at Bryan House, Emmanuel House’s very first house.  Their social change action ended in a deep friendship.  Go HERE for a video and article that tell this inspiring story.  There’s that word again: “story”—a good place to end…or begin.

I’ve spoken a few times about race and ethnicity.  “Ethnicity” often applies mostly to whites, but for years I’ve thought the new frontier in race studies needs to be about white ethnicities.  Another reason racism remains so alive is that whites have largely lost contact with their ethnic heritage, and thus with the stories of the struggles their ancestors had to go through to become “white.”  For “whiteness” doesn’t just refer to skin color: it refers even more to power.  The title of Noel Ignatiev’s important book says it all: How the Irish Became White. Yet another book to study deeply, for both its stories and its insights into systemic racism.

♦  Go to the Teaching Diversity main page, and to “Becoming the Beloved Community: The Workshop,” where the article above is mentioned, and where you’ll find a link to the Lead Post in a series of articles related to that workshop.