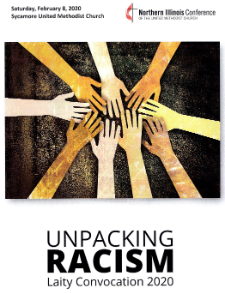 This article is part of a series of posts based on the 2020 Laity Convocation of the Northern Illinois Conference of the United Methodist Church.  Go to the Lead Post in this series.  Below is the presentation of JUDY SIABA, who moved from Mexico with her mother and three siblings to join her father, who had come months earlier with six other airplane mechanics for a job in Lansing, IL.  A Methodist pastor helped him find a place for his family in Chicago’s Hegewisch neighborhood.

“Living in a mostly Polish neighborhood at the beginning meant that the kids on the block at first did not play with us. Our landlady was Polish and would start speaking to my mom in English and switch to Polish without realizing it. This at the beginning didn’t matter to my mother because she spoke very little English. I did not have the privilege of going to a school with ESL classes. It was learning English through immersion and help from my older brothers who had been attending an English school in Mexico. I don’t know if you lived in the late 1950s but if you did you might recall the cowboy TV programs and movies and how Mexicans were depicted. Well, it was not in a very good light. Even in the Lone Ranger, his partner who was Native American was given the name of Tonto, which in Spanish means silly, fool, stupid, idiot, moron, dummy. It took us a while for the neighbors to see we were like them in many ways. We had the same needs, (home, love, food, friends) we worked hard, helped others. By the time we moved to Rockford we had become part of the community. Our neighbors risked and got to know us and developed a different view of Mexicans.

“In Rockford I was blessed to attend schools that were integrated. My sixth-grade class consisted of students with Lithuanian, Italian, African American, Mexican and Caucasian backgrounds. It was a different world than Hegewich. The church we attended in Rockford was Broadway MC. This congregation was special in that it welcomed a Japanese/American family and my family. During my years there they also welcomed with 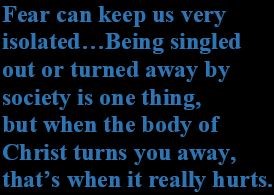 open arms a Filipino pastor and an African American pastor. It was during my years there that we had a very progressive pastor who provided us with racial experiences. He took the senior high youth into Chicago to attend an Operation Breadbasket gathering. He also took us in to Newberry Center in the Maxwell Street area in Chicago to spend the night with kids from the center there and experience their changing neighborhood. Later several of those kids came and spent a weekend in our homes and worshiped with us. Another memorable evening was when Rev. Shive had three Black Panthers come for a potluck and share with us their work in the neighborhoods in Chicago to make it a better place. I was learning that we are all God’s children and that the church was working at bringing God’s children together. I was being exposed to many different cultures and justice issues. My church was being God’s hands and feet.

“I had learned about racism all around me, but it had not hit me until right before I was married, a pastor parish committee was ready to stop the student appointment of my then Fiancé soon to be husband,  just because of his name. Fernando. They had not met us yet but were ready to tell the D.S. that we were not welcomed. Being singled out or turned away by society is one thing, but when the body of Christ turns you away, that’s when it really hurts. I need to explain a bit about this one-year appointment. The congregation was a small Norwegian American congregation of mostly older members. Their kids had moved to the suburbs but always returned to an annual homecoming concert. Their neighborhood was changing as more and more Puerto Ricans were moving in. They were afraid of change. They did not know the culture or language of the new neighbors. Fear can keep us very isolated. Shortly after we had left the church trustees rented the apartment that had been empty for several years to a Hispanic man. The congregation had experienced a different culture through us, and their fears had subsided…

“I was raised to always be proud of who I am and whose I am. Because of that I have also taken advantage of my ethnicity when it has provided opportunities to serve beyond the local church.

“Unfortunately, the Northern Illinois Conference is not given the opportunity when electing General Conference and Jurisdiction delegates to be truly inclusive.

“It might be interesting to look back and see the order of election of the delegates. Who are the first ones elected and who are the last. Please take note that this has been the experience of a Mexican woman. I know that if I was male some of my experiences would have been different.”

JUDY SIABA is a member of Euclid Avenue UMC in Oak Park.  Born in Mexico in a Methodist family, she’s been a lifelong Methodist/United Methodist whose passion is seeking and advocating for God’s justice for all people.  As a young adult she joined the United Methodist Women and was mentored by many women in the Northern Illinois Conference (NIC) and North Central Jurisdiction, who helped her develop leadership skills and discover her gifts for mission.  She has served as national vice-president of the UMW, Conference Secretary for Global Ministries, Aurora District Lay Leader, and director of the General Board of Global Ministries, where she first heard of Justice for Our Neighbors.  She has just concluded seven years on the board of Northern Illinois Justice for Our Neighbors, including two years as president.  A music educator in the public schools, as well as in private lessons, she was also employed as administrative assistant to the director of Congregational Development of the NIC, and is currently archivist for the World Federation of Methodist and United Church Women.  She has served as presidet of the North America Area and the Caribbean of this body, and as a delegate to three UMC General and Jurisdictional Conferences.  Married to Rev. Fernando Siaba for 43 years, she and her husband have three daughters and six grandchildren.

♦  Go to the TEACHING DIVERSITY main page.  For another article focused on knowing your neighbor go to “We Ignore Our Neighbor’s Potential at Our Own Peril.”