This article is part of a series of posts based on the 2020 Laity Convocation of the Northern Illinois Conference of the United Methodist Church.  Go to the Lead Post in this series for a complete list of articles.  Below is PART 1 of Rebecca Fraley’s talk on the meaning of White Privilege.
Read Part 2 of her comments.

On the Teaching Diversity main page of this site, I write what I’ve often written and said for decades: “Race relations would improve 100% over night,” if people of color felt that whites truly acknowledged their “privilege.”  Yet acknowledging this is one of the hardest things to do.

There are many reasons acknowledging privilege is difficult, and at the 2020 Laity Convocation of the Northern Illinois Conference of the United Methodist Church, panelist REBECCA FRALEY (see bio below) took on the question, What is white privilege and how does it impact the institutions and systems of the United States?  Her very helpful thoughts are below, especially that…

We don’t actually agree or understand about what “White Privilege” means.

“White privilege is a term used to describe a concept that suggests that white people are privileged over people of other races and cultures.  The word ‘white’ can be uncomfortable for those who are not used to being defined or described by their race.  And the word ‘privilege’—especially for poor and rural white people—sounds like a word that doesn’t fit their circumstances and suggests they have never struggled.

“White privilege is NOT a suggestion that white people never struggled; many do not enjoy the privileges that come with ‘relative affluence’ such as food security.  And many don’t experience the privileges that come with ‘access’ such as nearby health care.  And white privilege is NOT the assumption that everything a white person has accomplished is ‘unearned.’  Most white people who have reached a high level of success had to work hard and make sacrifices to get there.  It should then be viewed as ‘a built-in advantage, separate from one’s level of income or effort.’

“Francis Kendall, author of Diversity in the Classroom and Understanding White Privilege: Creating Pathways to Authentic Relationships Across Race, defines white privilege as ‘having greater access to power and resources than people of color (in the same situation) do.’

“Education researcher Jacob Bennett tracked the history of the term and found that:

—Before the Civil Rights Act of 1964, “white privilege” was less commonly used but generally referred to legal and systemic advantages given to white people in the United States (i.e., citizenship, the right to vote, the right to buy a house in the neighborhood of their choice).

—In 1988, after several years of persistent discrimination, Peggy McIntosh published a groundbreaking essay titled “White Privilege: Unpacking the Invisible Knapsack.” Many people began to view white privilege as being more psychological, a subconscious prejudice perpetuated by white people’s lack of awareness that they held this power.

—Some people of color continued to insist that an element of white privilege included the after-affects of conscious choices.  For example, if white business owners didn’t hire many people of color, then white people had more economic opportunities.  Legislative bodies, corporate leaders, and educators are still disproportionately white and often make conscious choices that keep this cycle going.

“‘The more complicated truth: White privilege is both unconsciously enjoyed and consciously perpetuated.  It is both on the surface and deeply embedded into American life.'” 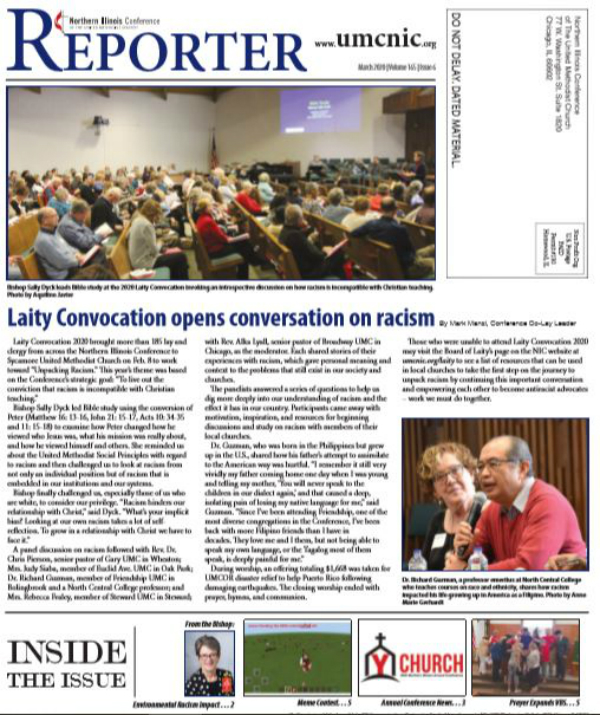 The front page of the Northern Illinois Conference Reporter, reporting on the Convocation.  Rebecca Fraley and I are pictured as panel members.

REBECCA L. FRALEY is a lifelong member of Steward UMC in the DeKalb District.

She currently serves as Chair of the Administrative/Church Council, Recording Secretary of the Committee on Lay Leadership, member of the Good Neighbor Fund Committee, and UMW member.  She also represents Steward UMC at the Neighbors in Christ Ecumenical Center in Lee County as the Chair of the Board of Directors and volunteers at the Center on Saturdays when clients are there.  Rebecca has a Masters Degree in Sociology, along with a Graduate Certificate in Gerontology, from Northern Illinois University.  She taught “Intro to Sociology” and “Social Gerontology” as an adjunct at Kishwaukee College.  Recently “retired” from Lutheran Social Services of Illinois as the Social Service Coordinator at Lincoln Manor Senior Housing in Rochelle, she enjoys semi-retirement by working part-time at Family Service Agency in DeKalb as the Senior Connections Program Specialist.  She and husband Clay live in rural Kings with their two dogs, Althea and Buddy, and enjoy gardening and spending time with their kids and grandkids.

♦  Go to the Teaching Diversity main page on this site.  There’s a link there (and here) to my Sermon “Pentecost Means No Supremacies,” which directly addresses White Supremacy, the underpinning of White Privilege.  However, be sure to read the post accompanying this sermon, where I “correct” and add to it.