Voices and Freedoms: The Intro Show

The Video/Audio below is an excerpt from the Intro Show to my radio series Voices and Freedoms: A History of Jazz, based on my 1976 book of the same name.  The 16-part series played across the nation for five years in the late 70’s/early 80’ and holds its relevance—or is even more so—today than it was back then.  The excerpts present about 6 to 8 minutes of the original 30-minute broadcasts. The link above takes you to information about the book and our plans to re-release it and provide access to the full-length original shows. Go HERE for a complete list of shows and links to all excerpts. 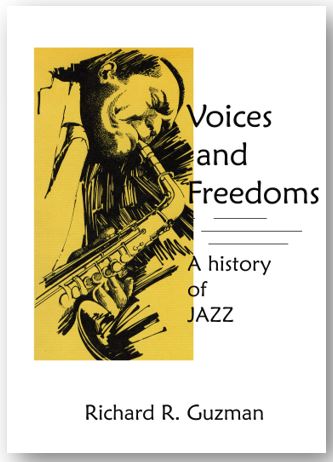 My first book, Voices and Freedoms: A History of Jazz, came out in 1976, and even before the ink was dry the idea of a radio show was proposed and we began work on it at the University of Virginia.  The show would promote not just the book but the university’s entire Department of Continuing Studies.  The radio engineers weren’t welcoming at first.  “See that line,” said the head engineer, Eric, pointing to a heavy painted stripe on the floor at the entrance of the control booth.  “You’re on that side.  I’m on this side.  You don’t cross over, ever.”  I had to earn my chops, had to prove to them I had some radio talent, radio know how.

I didn’t.  But I’d always wanted a radio show.

At Cal State, Hayward—Hay U, we used to call the place, which is now Cal State East Bay—a few fellow graduate students remarked that I seemed to be the least dedicated of them all because what I really wanted to be was a DJ.  I grew up listening to great Bay Area radio stations and, as I write, I have before me a parody book put out by Terry McGovern, one of the most popular DJ’s on KSFO, AM 560.  Called Listen to the Loud, it spoofs the poet Rod McKuen, whose ultra-mushy, ultra-sensitive poems were so popular during the day.

I’m much better on the radio, or narrating something now, but listening to these jazz shows now, I have to admit I wasn’t very good.  I’m clearly reading a textbook, not just speaking naturally.  I must have been good enough, however, because Eric and the other techs soon extended their good graces to me and heartily invited me to cross the control booth line any time I wanted.  Before long, UVA radio’s producer, another Rod, Rod Collins, was running down the stairs at the radio station shouting, “You’re playing in Poughkeepsie!  You’re playing in Poughkeepsie!”

“Where?” I asked. “Ever heard of Vassar?  Huh?” he replied, looking bug-eyed at me as if I were an idiot. With Vassar leading the way, many other stations on the Intercollegiate Broadcasting System would be picking up the series, too. 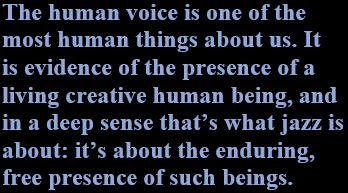 Freddie Hubbard and Julian Bond join me on the broadcast as I attempt to set up the whole series.  The Intro Show focuses mainly on the book’s unusual title.  People have often referred to it as “Voices of Freedom,” but it’s Voices AND Freedoms.  Perhaps the freedoms part is easiest to explain.  In the book and radio series it means first the growing freedom of forms that jazz would take as it progressed from its earliest brass band musical influences to the free jazz movement and beyond. It also meant the freedom struggle, primarily of American Black people.  Looking back, I’m somewhat startled to see how I was already writing and speaking deeply about a topic that has occupied so much of my academic and social change efforts over the decades.  That’s why I believe the book is perhaps as, or even more, relevant today as the struggle of Blacks for their freedom and the freedom of other people of color—and even white people—seems to have reached another crucial break point.

The voices part refers to jazz’s obsession with the human voice.  Early in the book, and in what you’ll hear in the excerpt of the Intro Show below, I say this: “The sound of the human voice is more precious than we know.  It breaks out in laughter, in words bitter or sweet, shy or commanding; it sighs, cries and groans; it lapses into silence, which can be one of its most expressive moments. And jazz has always been obsessed with it.  Though basically an instrumental music, jazz tone, concept, and feeling derive mainly from the vocal milieu of black folksong.  When jazz musicians play, they speak, growl, moan, mutter, croon, confess the blues, shout, whisper: they treat their instruments as extensions of the human voice…The human voice is one of the most human things about us.  It is evidence of the presence of a living creative human being, and in a deep sense that’s what jazz is about: it’s about the enduring, free presence of such human beings.”  Learning to hear the human voice indwelling in jazz is the easiest way to understand and relate to the widest variety of jazz music, from the most constricted songs of its early history to the wildest, freest songs it produces today.

♦ Go to the Training and Teaching Diversity main page.