The VIDEO BELOW stitches together excerpts from four clips: first, on the infamous “Bloody Sunday” incident, then three on Voter Suppression from 2010 to 2020—a decade which has seen voting rights seriously rolled back from its high point in 1965’s Voting Rights Act, an Act inspired by the courage of Civil Rights Leaders like the late John Lewis, whom we lost on July 17, 2020. 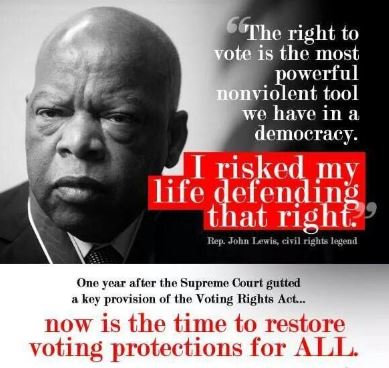 On March 7, 1965, Lewis was one of the leaders of peaceful protestors who, as they crossed the Edmund Pettus Bridge in Selma, Alabama, were viciously attacked by state troopers, county sheriffs, and a horse-mounted posse.  Many were injured, including Lewis, whose skull was fractured.  The incident became known as “Bloody Sunday,” and the shock and outrage of many of those watching TV coverage was one factor in the passage of the Voting Rights Act later that year on August 6th.  About 19 months earlier, on August 28, 1963, John Lewis, then just 23, had been the youngest speaker at the famous March on Washington.

The Pettus Bridge was named for Edmund Winston Pettus, a former Confederate brigadier general, leader of the Alabama Ku Klux Klan…and U.S. Senator.  This year, ten days after Lewis’ death a bill was introduced proposing to name the Voting Rights Advancement of 2019 (H.R.4) after John Lewis.  It passed the House, but though nearly every Republican in the Senate paid tribute to Lewis—known widely as “The Conscious of Congress”—only one GOP Senator voted for the bill, and it was defeated.

John Lewis speaking at the 1963 March on Washington. He was just 23.

H.R.4 sought in part to remedy the damage done by a 2013 Supreme Court decision in Shelby County vs. Holder which struck down Section 5 of the 1965 Voting Rights Act. Details are in the VIDEO below, which also explains that within 24 hours of this decision three states began enacting suppressive voter ID laws.  The situation has gotten worse since then, though there have been legal victories attempting to counteract voter ID laws and other tactics meant to suppress voting, especially by people of color, the poor, and other marginalized groups.

In April 2016, for example, the United States District Court for the Middle District of North Carolina ruled that the state’s new voter ID laws did not place unconstitutional obstacles between the state’s residents and their voting rights.  However, three months later, on July 29th, a three-judge panel for the United States Court of Appeals for the Fourth District overturned that ruling.  Here’s a paragraph of the decision, written by Judge Diana Gribbon Motz.  It contains the now famous phrase which I’ve italicized, bolded, and underlined.

“In response to claims that intentional racial discrimination animated its action, the State offered only meager justifications. Although the new provisions target African Americans with almost surgical precision, they constitute inapt remedies for the problems assertedly justifying them and, in fact, impose cures for problems that did not exist. Thus the asserted justifications cannot and do not conceal the State’s true motivation. ‘In essence,’ as in League of United Latin American Citizens v. Perry (LULAC), 548 U.S. 399, 440 (2006), ‘the State took away [minority voters’] opportunity because [they] were about to exercise it.’”

Those cures for problems that did not exist include voter fraud, which does exist, though in vanishingly small numbers—perhaps, according to one study, 31 in 1 billion votes: 0.000000031%!  Still, many Americans believe fraud is “rampant.”  “Dirty Tricks: 9 Falsehoods That Could Undermine the 2020 Election,” a piece from the Brennan Center for Justice, is a good summary of false notions about the integrity of elections. 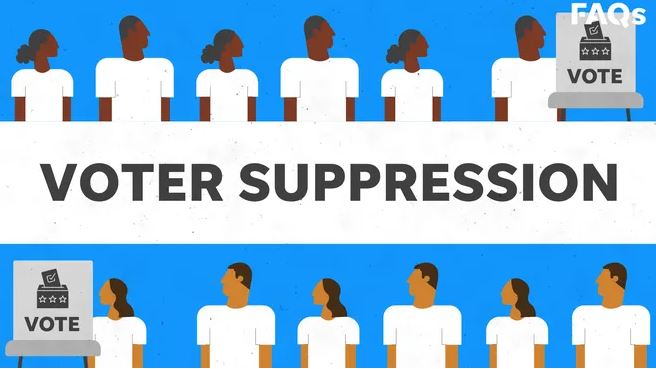 Voter suppression tactics are often presented as rational, commonsense actions to “protect the integrity of elections,” but it becomes clearer each day that racism is at the root of them. The title of Grace Panetta’s article for Business Insider seems to say it all:  “Black Americans still face obstacles to voting at every step of the process.”  This piece is a good summary of those obstacles, obstacles that dishonor the legacy of John Lewis and everyone who has placed the Right to Vote at the center of their fight for Civil Rights for everyone.

Other Resources.  After watching the VIDEO below, dig deeper.  First, three pdf’s of longer reports on partisanship, voting and democracy:  1) From the Economist Intelligence Unit — “Democracy Index 2019,” which calls the U.S. a “Flawed Democracy,” ranking it just the 25th best democracy in the world.  Though the link to Voter Suppression is not as strongly made as it could be, given the evidence cited, there is a significant indictment of partisan politics. 2)  From the Bipartisan Policy Center — “The 2018 Voting Experience,” which definitively cites race as the major demographic factor in voter suppression.  And 3) From the Brennan Center for Justice — “The Challenge of Obtaining Voter Identification,” giving exhaustive details on seemingly reasonable laws which actual target specific populations to take away their voting rights.  Finally, a Short Summary of the article above and the video below used for a Voter Registration Drive.

♦  Go to the TEACHING DIVERSITY main page, and to “Becoming the Beloved Community: The Workshop,” where the article above is mentioned, and where you’ll find a link to the Lead Post in a series of articles related to that workshop.