Walmart, Pence, and Politics As Usual

Say what you will against Walmart—and there’s lots of negative—but on June 29, 2020, USA Today’s Charisse Jones reported:  “Walmart will stop the sale of ‘All Lives Matter’ merchandise on its website, noting that it is putting its emphasis on Black people and other people of color whose lives are being ‘impacted by ongoing racial injustice.’

“The nation’s largest retailer is removing the items which are sold by third-party sellers ‘indefinitely,’ after hearing from some employees and customers who were concerned about the meaning behind the merchandise.

“ ‘We fundamentally believe all lives do matter and every individual deserves respect,’ Walmart said in a statement. ‘However, as we listened, we came to understand that the way some, but not all, people are using the phrase “All Lives Matter” in the current environment intentionally minimized the focus on the painful reality of racial inequity.’”

In a recent sermon titled “Three Things to Stop Saying,” the first phrase I focused on was this notorious “All Lives Matter” mantra, a favorite of Americans who would rather talk about anything—anything—but race. 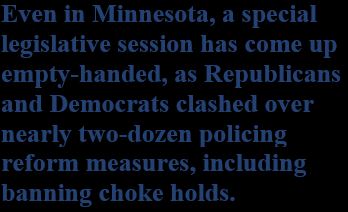 Walmart’s move is in stark contrast to Vice President Mike Pence’s refusal to say “Black Lives Matter,” instead opting for…“All Lives Matter.”  Of course. He’s done this over and over in the days preceding Walmart’s decision, committing a classic trifecta of old, backward moves: 1) saying BLM is a Marxist plot, 2) bringing up abortion, and 3) citing Martin Luther King, Jr. incorrectly.  In other words, BLM isn’t pointing out a fundamental flaw in our democracy—racism—but working for an outside agitator.  In other words, let’s talk about abortion instead of race.  Not that abortion isn’t an important topic, but once again, let’s talk about anything—anything—but race.  In other words, MLK Jr. would agree with me.  He wouldn’t.  We Americans easily embrace the warm-fuzzy MLK Jr.—the “I-Have-a-Dream” MLK Jr.—but not the person who was really tough on racism, injustice, and exploitation, the person who would have been one of Black Live Matter’s loudest, clearest advocates.  (See “Why I Oppose the War” on this site.)

And inevitably there’s the political establishment, of which Pence is only one cog.  It’s perhaps the biggest obstacle to true reform.  In a June 28, 2020, analysis titled “After weeks of protest, meaningful police reform seems unlikely,” CNN’s Josh Campbell reports that even in Minnesota, the epicenter of our recent racial crisis, a special legislative session has come up empty-handed. “Partisan entrenchment ruled the day,” writes Campbell, “as the Republican-controlled Senate and Democratic-led House clashed over nearly two-dozen policing reform measures,” including banning choke holds.  This isn’t fake news.  Even one of the more “radical” proposals, disbanding the police, will endure weeks more input and have to pass a ballot proposal in November, if it even gets on the ballot.

I’ve been writing a lot on this site recently that IF we work really hard on anti-racism it will still take 40 to 100 years to see a less racist U.S.  After my “Three Things to Stop Saying” sermon, where I again said this, several people said that was really hard to hear.  When I said this the first time most recently, on a panel at an “Unpacking Racism” convocation, another panelist said that while he respected me, he thought I was being too optimistic.  I was.  But even if the current protests seem to have come up empty-handed because of our political leaders and the politics of division, maybe all isn’t lost.  For now, and probably for at least a couple of decades, we’ll just have to go around our leaders and our politics.  Walmart’s made a move, as have many other companies, like those pulling ads from Facebook.  And our younger generations seem to want to face racism more squarely than any of the generations before, even during the Civil Rights era.  As always, our hope lies with our youth.