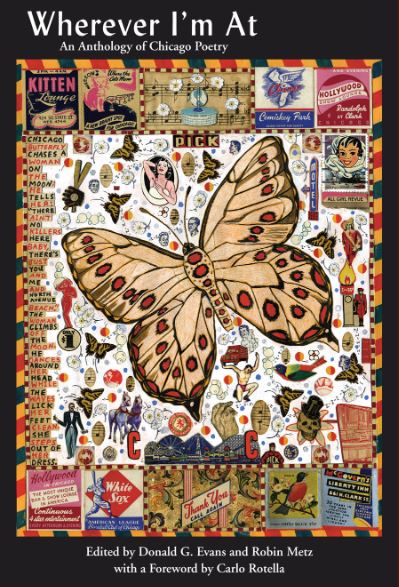 The Chicago Literary Hall of Fame is publishing its first book.  Wherever I’m At is a fabulous collection of poetry, which officially launched just this past June 13th at the Logan Center for the Arts at the University of Chicago. There will be more events, like the panel I’m moderating at the Chicago History Museum on the evening of July 12th, where I’ll be talking to contributors Haki Madhubuti, Vida Cross, Yolanda Nieves and Virginia Bell.  Below is a one-minute/eight-second VIDEO ad I did for the book.  I say:

“Hello, I’m Richard Guzman, and I know a few things about Chicago anthologies because I did two big ones: Smokestacks and Skyscrapers with David Starkey, and Black Writing from Chicago on my own, and I’m here to tell you that you have to get the new anthology from the Chicago Literary Hall of Fame…All poetry, and as exhilarating a collection as I’ve ever read, by some of the most distinguished writers in America—all prized up with Pulitzers, all granted up by Fords and MacArthurs. One even wrote and read a poem for a Presidential Inauguration…But whatever they’ve won, wherever they’ve read, Wherever I’m At—that’s the book’s title—Wherever I’m At, they’re all in Chicago somehow, Chicago as a vibrating, planetary point, Chicago as a portal into the total, wide inner and outer universe…It’s for everyone, wherever you are, and every place you find yourself, but the book also returns you here to a city as real as steel and Lake Michigan and pedestrian tunnels under Lakeshore /slash/ DuSable Drive. It’s a beautiful, beautiful trip.” (Pieces of my video are incorporated into a six-minute-plus promo video you can watch HERE.) 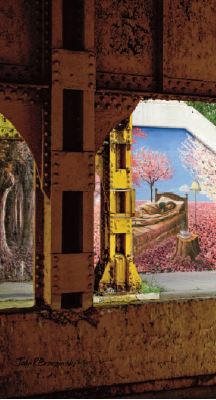 Fragment of a photo by John Brzezinski.

I’ve been close to the CLHOF since the Hall’s founder and still-executive director, still all-everything-impresario Don Evans called me more than a dozen years ago and asked me to be on the first committee of people nominating great Chicago writers for induction.  I’ve done some of those induction speeches—for Fenton Johnson and Marita Bonner, for example—and after a few years of prodding, I joined the Board of Directors earlier this year, with the proviso that they can throw me out with no hard feelings if I fail to pull my weight…which I’m still not doing these first few months.

The book is co-edited by Don Evans and the late Robin Metz, who started the project many years ago, brought Don into it, and which Don finished after Robin’s death.  At least 15 wonderful photos and pieces of artwork adorn the book, two fragments of which you see at left.  And to end here are just a few fragments of poetry among many, many striking passages grabbing my attention the first time I read through Wherever I’m At, starting with the fragment that gave the entire book its name: “wherever I’m at that land is Chicago.” And “The neighborhood contains / The Midwest Mambo Club / and two stores named / Hosanna. The School of / Metaphysics used to be / located over Harry’s Bar….”

Fragment of a painting by Kerry James Marshall.

And “My memory is a soft cloth / rubbing the pieces together. / We still live inside this wound / on Division Street….” And “Here a spirit must yell / to be heard yet a bullet / need only whisper to make / its point—sometimes I imagine / you right before your death / with an entire city in your ears.” And “He’s a sucker for poets and writers, / hides his artistry behind lions, / spits poems in bars, / blows solid blues.”  And you’ve just got to parody Carl Sandburg: “Candy Maker for the World, / Deep Dish Pizza Baker, Seller of Futures, /Trader of Fortunes, Strider of the Magnificent Mile, / Soupy, Stalwart, Honking, / City of the Proud Suburbs.”  So many striking you on virtually every page, but for me none more than from one of my favorite poets, Mark Turcotte, whose poem “Hawk Hour” brings the anthology to a close.  His prose poem begins, “In this city time unwinds in unnatural ways.”  “It’s bad for the body,” he continues towards the middle of the first paragraph. “Even here at the corner of Sheridan and Pratt, the lake and its waves only a block away, I cannot measure my dying.”  The flows are all wrong. The city breaks his clock and all the natural clocks of nature. The poem ends with the speaker at the Loyola Station where he crawls up the escalator, but at 90 miles an hour!  Then at the top—spewed out at 95 mph—he suddenly lingers “in a shadow that drapes itself across my eyes. I catch my breath, I stand upright. Above me the shape of a hawk drowns out the rush of the next ten trains and with its beating wings reaches out to stop the sky.”  “Chicago” is the French version of “Stinky Onion,” Shikaakwa, in the Miami-Illinois language. What a great, spectacular choice to end with the Native-American sensibility Turcotte brings.

♦ Don Evans always points people to this website as a great resource on Chicago literature. Go to the Chicago Writers list and the Black Writers list to most easily access much of my writing on this subject.

This entry was posted in Chicago Writing, Music & Media Podcasts, Writing and tagged Chicago Literary Hall of Fame, Don Evans, Mark Turcotte, Wherever I'm At: An Anthology of Chicago Poetry. Bookmark the permalink.