Who Do You Stand With? A Sermon for Transfiguration Sunday – Part 1

I preached this sermon on February 23, 2020, ahead of a vote at my church to become a Reconciling Church and join the Reconciling Ministries Network, a network of churches advocating for full inclusion of LGBTQ+ persons.  This issue has been a contentious one in the United Methodist Church for decades, coming to a boil when the 2019 General Conference of the church voted to uphold the “Traditional Plan,” maintaining and tightening restrictions on LGBTQ+ persons and clergy who supported them in such things as marriage.  Due to technical issues, a video of this sermon may not be available.  It will be posted if it does become available.  What follows is a rough recollection of what I said.  After reading this Read PART 2. 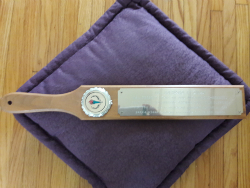 My “paddle” award from the Minority Students Association. See text for what’s inscribed on it.

I guess, given the vote we’re taking after this service, this is a kind of hot-seat sermon.  I’ve spoken a lot at hot-seat times, and want you to know—I don’t like it!  I even brought this paddle to defend myself just in case.  It’s one of my most prized possessions.  The plaque on it is inscribed: “DR. RICHARD GUZMAN.  The Minority Students Association presents this to you with whole-hearted gratitude and sincere appreciation for your support.  P.S. You can use it to defend yourself against all the people whose feathers you ruffle for us and others.”

But when I see this paddle it mostly reminds me of what more I could have done, and how little it took to encourage these students.  I spoke up a few times.  I stood with them a few times.  And it didn’t cost me all that much. I really don’t deserve it, though many have said to me, “You don’t know how much it meant to us when you stood with us.”

This is Transfiguration Sunday, when we celebrate the time when Jesus took his disciples up to the holy mountain and was transfigured before them.  It’s represents the end of the Season of Epiphany which began with a burst of light in the sky: the star that led the Magi to the Christ Child.  Now that season ends with another light: the light transfiguring Jesus and leading us into the Season of Lent and His death.  There’s a lot to say about this, but since I have to try to be brief, we’ll focus on just one theme: who Jesus was standing with.  He appeared bathed in a bright light and standing with Moses, who led the Children of Israel into physical freedom and gave them The Law. So likewise Jesus led us out of spiritual captivity and summed up all the Law and prophets, saying, “You shall love the Lord God with all your heart, mind, and strength…and your neighbor as yourself.”  And he stood with Elijah, who defeated false prophets and warned us of the idols which bind us—something that Jesus would also do with even greater depth.  I want to ask this morning: Who do you see yourself standing with?

Three quick scenes.  One. I’m 17, a good guy doing good deeds—I was president of our high school club Princeps, for example, which was our honorary service society—and thought myself pretty smart.  I hated religious fanatics, and especially those who handed out pamphlets.  But one day I’m in San Francisco’s Golden Gate Park, and when I get back

to my car I find…a religious pamphlet on my windshield.  I rip it off, stick it in my back pocket, all incensed, and when I get it home rashly flip it open, finding on page one Romans 3:23—“All have sinned and fallen short of the glory of God.”  What a stupid thing, I thought; I bet it’s not even in the Bible.  So I grabbed the Bible I’d gotten when I was baptized as a child, a Bible I don’t think I’d opened much, if at all, since then, turned to Romans and…there it was: “All have sinned and fallen short of the glory of God.”  I broke out in a cold sweat.  I kept telling myself for two solid weeks that this reaction was stupid, too.  I brought all the reasoning skills I could against it, but this feeling—a feeling I recognize now as the Holy Spirit working me over—wouldn’t go away until I finally admitted, Yes, I too was a sinner, no matter how smart, how nice, how many good things I did.  I realized, in other words, that I stood with all sinners.

Scene Two.  During my long career I’ve met lots of famous people, so I have lots of names to drop.  But the one that’s affected me most is meeting Maya Angelou, the great American poet, actress, and activist.  I brought her to my college long ago, and one of the people who came to the show was…Oprah Winfrey, who calls Miss Angelou “Mother.”  It was quiet an evening, and I’ve written about it in more detail in a piece on my website you can read HERE.  It was widely re-posted after Miss Angelou’s death in May 2014.  In her performance that evening at the college her theme was “You have already been paid for.”  That is, what are you going to demand of yourself, how high will you set the bar for yourself, because you have already been paid for.  Who do you see yourself standing with?  In the 12th chapter of Hebrews, Paul tells us we should run and finish the race before us because we’re surrounded by a great cloud of witnesses. Maybe this cloud includes Moses and Elijah, but I feel it also includes all those ancestors, all those loved ones, who have gone before you and are watching, cheering you on.  They have paid a price for you to be here today, to be still in the race.  I especially think of those who fought to be free so you could be free.  This is Black History Month, a time to think of all those Civil Rights pioneers who bled and died.  They did this for all of us, you know.  Do you stand with them?  Do you see yourself standing surrounded by them, speaking with them, like Jesus was speaking to Moses and Elijah?

Scene Three.  We were supposed to go to a Valentine’s Day concert with Efren and Kim Ramos until Kim’s knee surgery got scheduled for…Valentine’s Day.  So Linda and I went and experienced something we’ve experienced at virtually every live concert we’ve ever been at.  The leader of the band shouts, “Everybody feeling alright?”  And the crowd shouts back so luke warm that he r she has to shout out again, “I can’t hear you. Everybody feeling alright?!”  And has to do it again and again and again until he or she gets something—anything—back that resembles enthusiasm.

[Continue to PART 2 of sermon]

♦  OTHER SERMONS (most with VIDEO):  “Pentecost Means No ‘Supremacies,’” “Sacred Doing,” “It’s Not What You Know But Who You Know,” “Elijah: The Growth of a Prophet,” “Searching for Prophets,” “Three Things to Stop Saying,” “How Holy Was Jesus?” “Servants Know First,” “Everything’s OK?” “The Quiet After Easter.”

This entry was posted in Diversity & Multiculturalism, Social Change and tagged Full Inclusion of LGBTQ, Oppositioin to the UMC Traditional Plan, Transfiguration Sunday. Bookmark the permalink.