“Why Sinatra Grows on You” 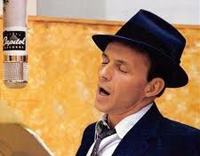 I like my pop drivel laced with rancor
and acid and the raw sugar of curled-
lipped youth peeling down the road, flying from
syrupy old fogies who didn’t have
the guts to just die before they got old!

…It’s just that eventually you figure
out that life’s going to be in your face
much more than you’re going to be in its—
you, stumbling around, searching shade, finding
no cool shadows except from your regrets

Rising like clouds, throwing nimbus purples
between you and that glare, ‘til night opens
its doors and you walk into joints to be
haunted by melodies—by Sinatra
singing “Who knows where the road may lead us?

Only a fool would say….” It’s self-pity
drunk in healing doses just this side of
drowning, reveries blasted when tires squeal
and peel, and Sinatra starts bellowing
Something about doing it “My Way”… Oh,

That lie, Frankie. That man walking down a
lonesome road doesn’t own it, he’s just lost
on it. And those high-tension wires buzzing
above? Somehow you’ve mistaken that for
the humming of a personal angel.

Richard R. Guzman
____________________
This poem originally appeared in slightly different form in Nebo.  Go here for a list of poems and poetry commentary on this site.

This entry was posted in Poetry and tagged Frank Sinatra, Poems by Richard R. Guzman. Bookmark the permalink.