In the Afterword of my book Black Writing from Chicago, after I apologize first for not including the great novelist Leon Forrest, I apologize second for not including Willard Motley.  I wrote: “Among other worthy novelists that could not be included is Willard Motley.  The opening pages of We Fished All Night is one of the finest evocations of Chicago’s Loop, and his most successful novel, Knock on Any Door, likewise contains brilliant passages rendering Chicago atmospherics as well as any writer ever has, including Nelson Algren, with whom Motley is often compared.”

The Chicago Defender published Motley’s fiction when he was only 13 years old, and Robert S. Abbott himself hired him to write a weekly kids’ column called “Bud Says” under the pseudonym “Bud Billikin,” after the famous parade and picnic still going strong today.  Besides Knock on Any Door (1947), and We Fished All Night (1951), Motley wrote two other novels: Let No Man Publish My Epitaph (1958), and Let Noon Be Fair (published posthumously in 1966).  Born in Chicago in 1912, he died in Mexico City in 1965, aged just 52, of intestinal gangrene.

Despite an early family life of mixed up identities—as a youngster he believed his grandparents were his parents and his mother his sister—that life was steady and full of important role models, including his grandfather, who was a Pullman Porter.  Living in the then mostly white neighborhood of Englewood, he also had few hostile interactions with whites, a situation, we suppose, that made it more normal for him to write mostly white characters.  In fact, Nelson Algren—a good friend, mentor, and early editor—once said Motley “wrote about white people for white people.”  To the accusation that he avoided race, Motley famously replied, “My race is the human race.”  But although race was a relatively minor concern in his novels, these did touch on many social issues, some—like white poverty in Knock on any Door, PTSD in We Fished All Night, and the exploitation of Mexicans in Let Noon Be Fair—which occupy headlines to this day. 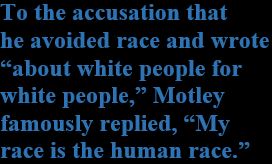 In our 1999 book Smokestacks and Skyscrapers: An Anthology of Chicago Writing, David Starkey picked an excerpt from Knock on Any Door, which basically follows the descent into crime of Nick Romano, an Italian American and former altar boy.  Convicted of killing a cop, “Pretty Boy” Romano—whose motto was “Live fast, die young, and make a good-looking corpse”—becomes something of a media star before he is finally electrocuted.  The novel was an instant success, selling over 47,000 copies in its first three weeks on the shelves, and eventually spawning a movie starring Humphrey Bogart and John Derek.

In an unpublished introduction to Knock on Any Door, Motley outlined his aesthetic: “the writer approaches his subject matter—his fellow man—in humility and understanding, in sympathy and identification.  And he tries—only the serious writer knows how hard—to tell the truth, frankly and unshrinkingly.”  This truth-telling, from Motley’s point of view, garnered less and less praise in succeeding novels, which readers and critics often characterized as grim and hopeless.  Motley, a conscientious objector during the war, was particularly sensitive to the effects of war on both returning vets and the civilian population, a theme grounding We Fished All Night, where he follows the descent of three protagonists from before their induction into the army and through the years immediately following WWII.  It is a vision of individuals, and the entire population, becoming hardened and less tolerant of diversity and dissent.

In 2014, Willard Motley was inducted into the Chicago Literary Hall of Fame, the citation reading, in part: “Motley was criticized in his life for being a black man writing about white characters, a middle-class man writing about the lower class, and a closeted homosexual writing about heterosexual urges. But those more kindly disposed to his work, and there were plenty, admired his grit and heart…Chicago was more complicated than just its racial or sexual tensions, and as a writer his exploration was expansive….”  And beautifully written.  Here’s a small passage from the larger Knock on Any Door excerpt David Starkey selected for Smokestacks and Skyscrapers.  It’s about the famous Maxwell Street Market, near which Motley settled when, after traveling the U.S., he returned to Chicago in 1939.

“Before him [Nick Romano] stretched the Maxwell Street Market extending between low, weather-grimed buildings that knelt to the sidewalk on their sagging foundations…On the stands were dumped anything you wanted to buy: overalls, dresses, trinkets, old clocks, ties, gloves—anything…There were still other rough stands—just planks set up across loose-joined wooden horses: hats for a quarter apiece, vegetables, curtains, pyramid-piled stacks of shoes tied together by their laces—everything…The noises were radios tuned as high as they could go, record shop victrolas playing a few circles of a song…men and women shouting their wares in hoarse, rasping voices, Jewish words, Italian words, Polish and Russian words, Spanish, mixed-up English. And once in a while you heard a chicken cackling or a baby crying.”

♦ Go to lists of Chicago Writers and Black Writers (mostly from Chicago) on this site.

This entry was posted in Black Writers, Chicago Writing, Writing and tagged Black Writing from Chicago: In the World-Not of It?, Chicago Literary Hall of Fame, Knock on Any Door, Nelson Algren, Smokestacks and Skyscrapers: An Anthol, Willard Motley. Bookmark the permalink.