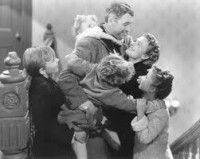 The Bailey’s at home in It’s A Wonderful Life.

No doubt, this will be the strangest review of the classic film and holiday favorite It’s A Wonderful Life you’ll ever read.  I’m focusing on one aspect that’s absolutely central, but usually overlooked.   Not on famed director Frank Capra’s style, featuring zany, often corny, feel-good endings, where “community” rides to the rescue.  Not on the cheesy contrasts between Jimmy Stewart’s pre- and post-epiphany George Bailey character, or the movie’s every-life-touches-so-many moral.  Not even on Clarence, George Bailey’s waif-like guardian angel, who just wants, finally, to get his angel wings.  I’m focusing on the social core of the film.  We always short-change the fact that the crux of the conflict pitting George and his father against Old Man Potter is housing, fair housing—more specifically, who gets to own homes in America.

I’m thinking of this especially now, as my “family’s” organization, Emmanuel House—now The Neighbor Project—is just a couple of weeks away from its 2020 GALA.  As with many gatherings this year, it’s virtual, making it easier to attend than ever.  The Gala is the main fundraiser for its efforts to uplift the working poor through home ownership. Read more and register HERE.  Emmanuel House was founded by Rick and Desiree Guzman as a living memorial to his youngest brother, Bryan Emmanuel, and in 2016 was named one of the “Top 100 Most Innovative” social change organizations in the world.**

Is home ownership truly as powerful as it seems, one of the indispensable foundations of the American Dream? Statistically, from a plain wealth-perspective, no.  The percent of wealth gained from it has historically been no greater and, in some cases, lower than if a family had just taken the money it invested in a home and bought stocks instead.  Yet It’s A Wonderful Life is perhaps the strongest advocate in film of home ownership. During one of its climactic scenes, George Bailey thunders at the evil, arthritic Mr. Potter, “Don’t forget it’s those people you call ‘rabble’ who do most of the working and dying in this town. Is it too much to ask that they do it in a decent house, with a decent roof, and a couple of decent rooms?” And later, an employee of Potter reports that George Bailey is building some of the “prettiest little houses you’ll ever see.”  I “may soon be asking him [Bailey] for a job,” he says.  The scenes of settling families into their own home are moving as well. And these families are portrayed as heavily ethnic—Italian mostly—Potter referring to them not just as lazy rabble, but as “garlic eaters.”

(I’m paraphrasing here, but I hope to augment this review soon by posting a short video montage of some of these actual scenes.) 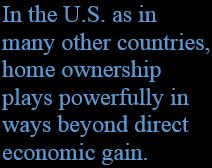 Still, as much as I’m committed to the home ownership vision, our recent housing crash has caused lots of questioning, even though it hasn’t seemed to seriously crack this American Dream foundation, a foundation built with policies and political rhetoric dating back to 1918 and earlier.  As of 2010, the percent of home owners in America was still roughly 67%, just below England’s, and Canada’s, and Sweden’s and New Zealand’s 68%. So the dream isn’t just American. Far above the U.S. percent is a powerful economy, Singapore’s at 89% home ownership. Below us, however, rank some of the world’s other most powerful economies—including Japan (61%), France (59%), and especially Germany (46%).  Switzerland is almost ten points lower yet (36.5%), while several other countries above us have been famous recently for their economic problems—or catastrophies: Italy (72%), Portugal (76%), Spain (85%). You can see this information on the net at several places, including HERE.  It all seems to add up to this: home ownership is a mixed bag, contributing uncertainly to economic stability and upward mobility.

Yet in the United States, as in many other countries, home ownership plays powerfully in ways beyond direct economic gain. A stock investment, for example, doesn’t usually tie people to a community.  In the United States, homeowners commit to communities more, staying four times longer than non-homeowners.  Their children are more likely to graduate from high school, partly because of this commitment, and they’re an astonishing 116% more likely to graduate from college.  Eventually this community stability, and the pride that comes with it, does lead to economic stability—especially for the working poor, and even more so with refugee families and racial and ethnic minorities.  As much as housing lost ground during the crash, other financial stats are even worse.  For example, today for every dollar of non-home wealth whites own, people of color own just one cent.  This isn’t a misprint: on average they’re 100 times poorer without their homes.

When I watch It’s A Wonderful Life, I’m drawn especially to those scenes of settling ethnic families into their homes because Emmanuel House grew out of Bryan House, which began by focusing—and still does focus—on refugee families, families who have lived in camps or in exile, sometimes for nearly a decade.  For “graduates” of Bryan House and Emmanuel House programs, owning a home means something deeper than most Americans will ever be able to imagine.

You can read more about Emmanuel House and Bryan House HERE, where—among other things—you can watch videos of:

And, to get back to this “review,” when you watch It’s A Wonderful Life this holiday season, remember: guardian angel Clarence gets his wings by helping George Bailey continue to do his job.  Bailey’s job is running the Building and Loan.  He puts people into their own homes.

♦  Go here for a list of reviews.
♦  For a story of how I actually met Frank Capra, go Here.
♦ Go to the Emmanuel House/Bryan House main page.  **Note: This paragraph has been added to continually update this original 2012 post by highlighting Emmanuel House’s most current Auction or Gala.  In a move that more than quadrupled its reach to working poor families, Emmanuel House merged with long-time partner The Joseph Corporation to become THE NEIGHBOR PROJECT in 2018.