Writing About the Philippines

This post serves partly as an index to the writing I’ve done on this site about my homeland, The Philippines.  My relation to this homeland has been problematic my whole life, and, in fact, the list of writings below is one of my strongest bonds to my birth country.  I read about the Philippines and write about its history and culture more than I’m actually in the country itself. 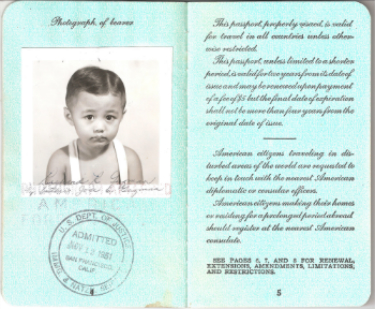 I was born in Manila in January 1949, leaving it to join my father—a U.S. Army soldier—in Okinawa in November that same year.  “When were you home last?” many of my friends ask, especially my Filipino friends.  I’ve never been back.  My father could not come back for my birth even, so his first sight of me was in Okinawa when I was already eleven months old.  After we all boarded a boat and came to the United States in 1951, I know of only one time he himself went back. My mother never went  back, and he did so only after my mother died in 1981.  It seems he almost died there himself, though we didn’t find out until many weeks later because there was still no phone in our village—San Esteban, Ilocos Sur—so we had to wait until someone walked the many miles south to La Union to call us.  My mother and father’s marriage caused a giant blowup between the two families who had formerly been friends—her brother, Uncle Jimmy, being my Dad’s best friend.  Until he married his sister.  My Mom didn’t speak to some of her siblings for 20 years or more afterwards, and both Mom and Dad told us, every time visiting the homeland came up, that the Philippines was a place you never ever wanted to be.  When my Dad’s Mom died, my parents fought about whether he would go back for his own mother’s funeral.  He didn’t.

Then there is the language.  In “Homelessness and Me” and elsewhere I’ve written about the deep, isolating pain of losing my native language.  I’ve even mentioned how it was taken from me in several sermons (see links below).  Until my language skills get better (if ever), I don’t know that I’ll ever go back. 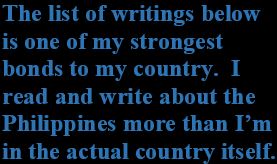 I received my most intense Filipino experiences the summers I spent as a “tween” and early teenager in Terra Bella and Porterville, California, mostly working the fields: picking tomatoes, grapes, and figs, hoeing weeds, pulling leaves.  There I heard the language again, though found it virtually impossible to speak.  There I helped hand-slaughter animals, mostly pigs and goats, for feasts.  Now, since I’ve been attending Friendship United Methodist Church (Bolingbrook, IL) for many years, I’ve been back with more Filipino friends than I have in decades.  They love me and I them, but not being able to speak my own language, or the Tagalog most of them speak, is a deep, deep pain.

Which leaves me a student of books and media and a writer of articles about the Philippines.  Listed first below is my major article on N.V.M. Gonzalez, one of the Philippines’ greatest writers.  It helped establish me as a writer and scholar.  By chance, the pre-publication proofs of the article arrived at his California home on his 40th wedding anniversary.  It was one of the greatest gifts he’d ever received, he said, and a monument to his work.  It has been reprinted several times including in Asian-American Writers, where the eminent American critic Harold Bloom picked it as one of the 15 best essays ever written on Asian-American literature.  As a memorial to Gonzalez the University of the Philippines published a beautiful 4-volume boxed set of his best work, and my piece also appeared there.

♦  Go to the Teaching Diversity page on this site.

This entry was posted in Diversity & Multiculturalism, Writing and tagged Martin Nivera, N.V.M. Gonzalez, Pops Fernandez, The People and Art of the Philippines, The Philippines. Bookmark the permalink.