In 1982 businessman Richard Proudfit felt called to feed starving children after he experienced their hardships on a missions trip to Honduras and heard God saying, “If you’ve seen my starving children, feed them.”  In early 1987 he incorporated Feed My Starving Children to develop an original meal formula and engaged food scientists, who developed a hearty “Fortified Rice Soy Casserole,” which FMSC re-named MannaPack™ Rice in 2008.  The average age of children receiving these meal packets is 5.   Feed My Starving Children also developed a unique way for volunteers to pack the meals with fun and music, and the first shipments left on board Mercy Ships in 1994. 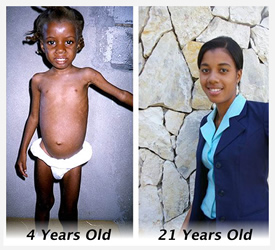 THE VIDEO BELOW shows a day in early June 2014 when volunteers from Friendship United Methodist Church joined other volunteers and, during their session, packed 56 boxes—12,096 meals, enough to feed 33 children for a year.  The picture at left shows Jonise as a poor child in Haiti, and today as a successful 21-year-old, thanks in part to the food provided by Feed My Starving Children.   In 1994 FMSC shipped 400,000 meals; in 2013 it shipped 191,600,000!  More stats:

We thank Feed My Starving Children for giving us an opportunity to be a small part of their mission. Find out more at http://www.fmsc.org/

After watching the video below, find out more about organizations helping the homeless and poor by going to the SOCIAL CHANGE main page of this site and clicking on such links as:

√ Video music by Dan Guzman.  Hear more of Dan’s music on this site or on the GuzMusic You Tube channel.