RICHARD R. GUZMAN is professor emeritus* at North Central College in Naperville, IL, where for decades he taught, and still occasionally teaches.  His courses have covered writing and literature, sacred texts, music, film, urban & suburban studies, race & ethnicity, and leadership for social change.  He has published essays, poetry, and music, and performs poetry and music.  His first book, Voices and Freedoms: A History of Jazz, was made into a nationally syndicated radio series, and one of his more recent books, Black Writing from Chicago, has been called “a work of great importance…and a sheer delight.”  He led in establishing the college’s Cultural Events Program, its Honors Program, and masters programs in Liberal Studies, Leadership Studies, and Social Entrepreneurship.  He has twice won awards for outstanding teaching and leadership, and helped establish the CODE diversity initiative, the Film Studies Minor, and such events as the Fall Festival of Independent Film, and the Gospel Extravaganza—which celebrated its 25th anniversary in January 2013.

He has long been involved in social change and social service work.  For example, he led in the development of a diversity plan for one of Illinois’ most important school districts, an initiative honored by the state.  He is also involved in his family’s organization Emmanuel House (now The Neighbor Project) founded by his oldest son, Rick, and wife Desiree, 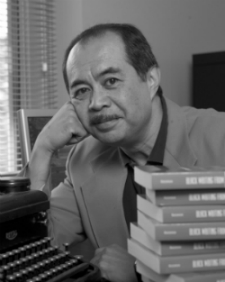 to honor Dr. Guzman’s youngest son, Bryan Emmanuel, who died at age 21. Emmanuel House helps break the cycle of working class poverty through home ownership and education, with “Bryan House”—the first site of now many sites—focusing on refugee families.  In April 2012, U.S. Senator Dick Durbin visited one of the Emmanuel House sites (see video), a testament to the organization’s innovative, successful programming, and in 2016 Emmanuel House was named one of the “Top 100 Most Innovative” social change organizations in the world.  Partly because of Bryan, Dr. Guzman is also fond of the Southwest, especially Sedona (see link above).  Please find out more about these projects and enjoy the work and music of Dr. Guzman, his family, and students and colleagues featured on this website.

* Go to his emeritus citation, and his reflection on retiring, “Retirement and Race.”