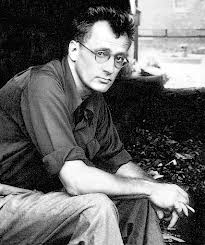 Although Nelson Algren was born in Detroit in 1909, his family moved to Chicago when he was three, and he lived in the city for most of his life.  Algren graduated with a degree in journalism from the University of Illinois and worked at a variety of jobs to support himself as a writer: salesman, gas station attendant, and field worker for the WPA Illinois Writer’s Project.  Among Algren’s books of fiction are Never Come Morning (1942), The Neon Wilderness (1947), and The Last Carousel (1973).  The Man with the Golden Arm (1949) won the National Book Award and was made into a film directed by Otto Preminger and starring Frank Sinatra.

Despite the fact that critic Leslie Fieldler dismissed Algren as “the bard of the stumblebum,” many Chicago writers have found inspiration in his gritty portrayal of street life.  Algren occasionally poked fun at the august figure of the great “white-haired poet” Carl Sandburg, yet shared Sandburg’s compassion for the city’s marginalized citizens—its working people and those out of work, the barely adequate and the easily defeated.  Although Algren drew heavily on Chicago for his inspiration, feelings towards the city were ambivalent at best, as “Nobody Knows Where O’Connor Went,” the final chapter of his book-length prose poem Chicago: City on the Make (1951), makes clear.  Certainly, there is a great love for Chicago: “Never once, on any midnight whatsoever, will you take off from here without a pang,” he writes.  However, Algren also believes that all the city finally has to offer is nothing but a “rusty iron heart.”

♦ Go HERE for a video of David Starkey and me performing an excerpt from this chapter on WGN radio. 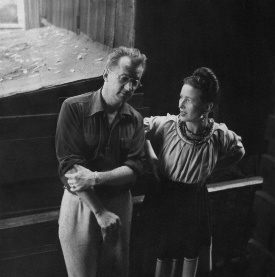 Nevertheless, he also felt Chicago was his mission.  From 1947 to 1965 he carried on a famous Transatlantic affair with Simone de Beauvoir, Jean Paul Sartre’s student and life-long companion, an affair commonly described as “torrid,” the subject of several famous Art Shay photographs (at left), and partly chronicled in an extraordinary correspondence published in 1998 as  Beloved Chicago Man: Letters to Nelson Algren, 1947-1964.  (A year later it was re-issued in paperback as A Transatlantic Love Affair: Letters to Nelson Algren.)  In 1949, the same year as Algren’s epochal Man with the Golden Arm was winning accolades, Beauvoir published her even-more epochal The Second Sex.  “Writing to you is like kissing you. It is something physical,” de Beauvoir insisted, to

which Algren, ever the prototypical Chicago realist, replied, “No arms are warm when they’re on the other side of the ocean.”  “I could not live just for happiness and love, I could not give up my writing…in the only place where my writing and work may have a meaning,” de Beauvoir wrote, meaning Paris. “My job,” Algren replied, “is to write about Chicago and I can only do it here.”

Toward the end of his life, however, Nelson Algren left Chicago for the east coast, rightfully convinced that the city he had described so vividly never truly appreciated him.  He died of a heart attack in Sag Harbor, New York, in 1981.

♦  Go to a list of Chicago writers written about on this site.  Many of the posts in this series are expanded versions of the introductions David Starkey and I wrote for our 1999 book Smokestacks and Skycrapers: An Anthology of Chicago Writing.

This entry was posted in Chicago Writing, Writing and tagged Art Shay, Nelson Algren, Simone de Beauvoir, The Man with the Golden Arm, The Second Sex. Bookmark the permalink.