> Go HERE for a list of prominent post-colonial writers who wrote their works originally in English, and to the links at the end of this post for “World Writers” written about on this site. 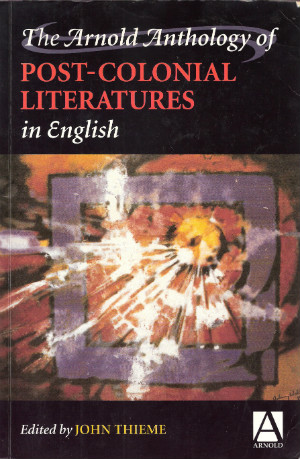 After doing two anthologies in seven years—Smokestacks & Skyscrapers (in 1999 with David Starkey) and Black Writing from Chicago (2006)—I swore I’d never do another.  The choices you have to make are maddening, the permissions process arduous at best.  Yet there’s no denying the incredible value of a good anthology, a fact that brought Smokestacks and Black Writing lots of praise.

Then after a recent search for a good world writers anthology, I realized there weren’t any—at least not a reasonably priced, relatively compact, comprehensive one, especially one that gathers together post-colonial literature written originally in English.  That literature is enormous and important.  Today India, for example, produces more “English” literature than the United States.  There are plenty of critical studies, like the seminal The Empire Writes Back—you have to love the title!—but these don’t give you the literature itself.  Big publishers like Norton, Longman, and Bedford produce multi-volume world literature sets, beautifully boxed, but big almost beyond usability.  At the other end, Chimamanda Ngozi Adichie and Jhumpa Lahiri’s One World: A Global Anthology of Short Stories presents just 24 contemporary stories.  Nothing, however, does what the Arnold Anthology of Post-Colonial Literature in English, now out of print, did.  It’s big, too (900 plus pages), but balances its breadth—four continents plus areas like the South Pacific and the Caribbean—with a fairly deep selection from each region.

I have quibbles about this depth.  I think there’s entirely too much from Australia and Canada, for example, and not nearly enough from the Philippines; but being Filipino, I must admit my bias.

The link I give at the beginning of this post will take you to a pdf of writers in The Arnold Anthology of Post-Colonial Literature in English edited by John Thieme.  Startling omissions abound, of course.  Those marked with a star (*) are not in the anthology, but I’ve added a few to give a greater sense of the depth of writing from a country—my homeland, the Philippines, for example.  Continuing my complaint from above, I note that the Islands were represented only by Nick Joaquin, one of our greatest writers, but hardly the only one worth mentioning.  The same goes for most countries and regions.  If we add post-colonial writers who wrote in their own languages—writers we know mostly by translation—then the number of those left out burgeons.  Two Nobel Laureates, Mahfouz Naguib (Egypt) and Rabindranath Tagore (India), come immediately to mind.  I’ll put these two in as reminders of the giant treasure house of writing not in the purview of the Arnold Anthology and mark them with a double star (**).

Send me your suggestions for more inclusions.

♦ Read major essays on this site about two of the most important post-colonial writers of English: Raja Rao from India, and NVM Gonzales from the Philippines.

♦ Go to a post about other World Writers written about on this site.