Posted on November 7, 2012 by Richard Guzman 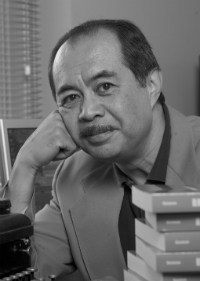 I lived in the South for several years in the late 70’s and at least once a day had this thought: The Civil War isn’t over, is it?  It felt vitally alive there, still breathing fire in town squares, flags, social institutions, personal interactions.  And I lived in a relatively progressive area, Charlottesville, Virginia, where I pursued my PhD at the University of Virginia, Mr. Jefferson’s University, founded by one who articulated some of our basic concepts of freedom while owning slaves. During 1976 Bicentennial celebrations, I was honored to have one of my choral compositions, “The Love of Thy Children,” performed by a combined choir from several of Charlottesville’s Black and White churches.  That Bicentennial service, I heard, was one of the first times Black-White churches had ever cooperated.  113 years after the Emancipation Proclamation, but better late than never, I suppose.

Though I know it’s a very complex relationship, the Civil War breathes on strongly in our Blue State/Red State dilemma, as suggested by this map I saw posted the day after Barack Obama won a second term as President of the United States. 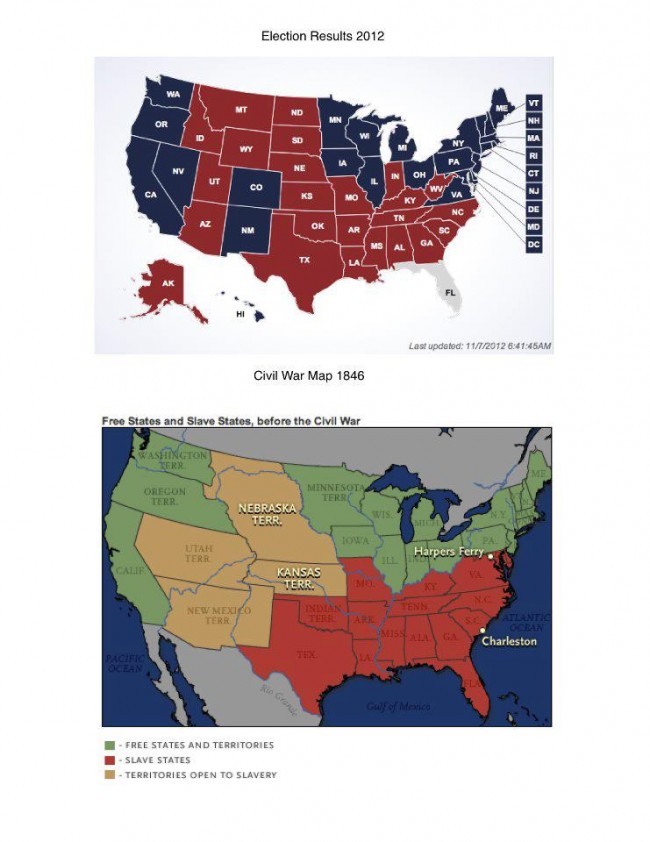 For me the greatest danger to our democracy is its growing inequality—one measure being, of course, that the greatest amount of wealth is now concentrated in the smallest percent of our people in our entire history.  In fact, the top tenth of the top 1%, make the lower nine-tenths of that top 1% look somewhat middle class by comparison.*

But rich-poor doesn’t play in the South.  State’s Rights plays.  We’ll-have-slaves-(or whatever)-if-we want-to plays.  This is one reason why the South—which contains some of the poorest, most unequal areas in the country—simply cannot see the irony of voting for a rich man whose policies would likely have made inequality worse.

Of course, not all Red states are southern states.  The non-geographical divide is between those who hate government more than they love equality.  We—all of us, both Democratic and Republican, progressive or conservative—need to focus on coming to some truce over the government side of this love-hate stalemate.  Though mostly liberal, I, too, am suspicious of government, especially as it has contributed to the concentration of wealth I mentioned above.  We need to hate government less and also champion it less.  But there’s no give on equality—which we all have to treasure more.   As the great American historian John Hope Franklin wrote, “Equality is indivisible.” **  It’s ultimately illogical to think of some as equal and others not.  Societies become uncivil—sometimes they crumble all together—if they don’t realize this.

_______________
*  See Jacob Hacker and Paul Pierson’s recent book  Winner-Take-All Politics: How Washington Made the Rich Richer — And Turned Its Back on the Middle Class, and read my article “Graphic Inequality.”

** Read more about John Hope Franklin here.  His quote comes from his essay “Racial Equality in America,” which I excerpted in my book Black Writing from Chicago.