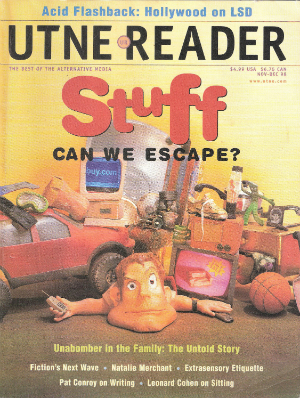 The gift-giving season just having passed, most all of us now have more stuff, and we’re poised for acquiring even more: the biggest bargains of the year coming in the dead of winter as merchants try to clear out what they didn’t sell during Christmas.  I’ve recently moved from a house we were in for nearly 20 years—20 years we jammed it with stuff—so these days I’m hyper, hyper sensitive about how much stuff I have.  After months of lugging boxes of it upstairs and down—in one box I found the magazine pictured here featuring an article on…stuff—I’ve still got about 40% of it left to lug.  “I bet everyone here,” I say as I look at one college class after another, “has at least twice what they really need, maybe more like three or four times. And me, after owning houses for decades, I probably have a 100 times what I need!”  Easily.

So I have thought for years about E.B White’s essay “Mrs. Wienckus,” one of his smallest—which makes me like it even more.  It was one of the somewhat random pieces he wrote for The New Yorker, and which the magazine sprinkled here and there, especially near the beginning of each issue.  It begins, as many of his pieces do, with him noticing something small in the news or just everyday living.  “The Newark police arrested a very interesting woman the other day—a Mrs. Sophie Wienckus—and she is now on probation after having be arraigned as disorderly.”  The police complained that she was bedded down in a couple of boxes in a hallway.  She could have done otherwise because they found on her person bank books showing she had $19,799.09 saved.  I presume the piece was written in the early 50’s, so that would be roughly $200,000 today.

So, naturally, the judge asks, “Why didn’t you rent a room.”  “We feel,” says White, “that the magistrate oversimplified his question.”

“…he should have added parenthetically ‘(and the coat hangers in the closet and the cord that pulls the light and the dish that holds the soap and the mirror that conceals the cabinet where lives the aspirin that kills the pain).’  Why didn’t you rent a room? ‘(with the rug that collects the dirt and the vacuum that sucks the dirt and the man that fixes the vacuum and the fringe that adorns the shade that dims the lamp and the desk that holds the bill for the installment on the television set that tells of the wars)?'”

A classic White move.  He constantly shows us how something seemingly little, almost throw-away, connects to something universal-big.  Where does the essential disorder lie?  “We salute a woman whose affairs are in such excellent order in a world untidy beyond belief,” White concludes.  It’s not just that we have so much we trip over it: it’s even more the mind set, the spiritual set, that leads to such tripping.  All of us pay lip service to the belief that we can’t buy happiness, but obviously we act, most of the time, as if we could.  That leads to all kinds of disorders.

♦  This article is part of a series on The Arts of the Essay.

This entry was posted in Reviews & Commentary, Writing and tagged E.B. White, too much stuff. Bookmark the permalink.