The Afterword to Black Writing from Chicago – Part 2

This is Part 2 of the Afterword to Black Writing from Chicago: In the World, Not of It?  Go here to read PART 1.  Part 1 dealt mainly with fiction, poetry, and drama writers I was—regrettably—not able to include in my anthology.  Part 2 below begins with great history and sociology writing, talks a little about great Chicago sermons, then returns to poetry, especially spoken word.  It ends with some broad views of Chicago Black writing, but also specifics—like all of the writers from the important earlier anthology NOMMO that I was unable to include.  The Afterword to Black Writing from Chicago adds many important names to the Black writers list previously published on this site. 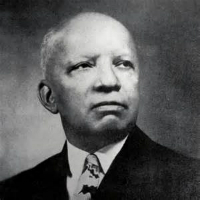 Great history and social analysis, represented here by John Hope Franklin and Lerone Bennett, Jr., has always come from Chicago.  Along with Franklin and Bennett, Chicago has produced, or had a major hand in producing, Carter G. Woodson, often called the Father of African-American History, and Sterling Stuckey.  The great E. Franklin Frazier received his Ph.D. at the University of Chicago.  His controversial The Black Bourgeoise (1957) asserted that the Black middleclass had gained status without substance.  In addition, the social psychologist Nathan Hare, the first person to direct a Black Studies program in the United States, probed the crisis of Black middle class identity in his classic Black Anglo-Saxons, another work of great interest for anyone who wants to pursue the theme of this anthology further.

As for poets, one of the more widely published in the late 60’s to 70’s was Zack Gilbert, whose forte was the small poem sharply painting a portrait or mini-drama.  As early as the late teens and early 20’s, there were so many and so distinctive a number of poets from Chicago as to constitute an acknowledged school.  Besides Fenton Johnson, W. Allison Sweeney, and Frank Marshall Davis, who are represented here, and Arna Bontemps and Margaret Walker, who were mentioned in the introduction, other members of the “Chicago Poets” school included Lucia Mae Pitts, William H.A. Moore, Henry Middleton Davis, Emory Elrage Scott, Edward Smythe Jones, and Alfred Anderson.  Of more recent years, one of the most interesting is Sun Ra, who published a small handful of poems and would have fit in wonderfully with the title of this book.  Known mainly as the jazz genius of the Sun Ra Solar Myth Arkestra, Sun Ra (Sonny Blount) often insisted he was not of this world, but from Saturn, as Marvin Tate’s poem “Soulville Revisited” alludes to.  In the middle of one of his signature pieces a band member exclaims, “It takes too long to become a citizen of this planet, so I am here to proclaim your citizenship in the greater UNI–VERSE.”  Sun-Ra may also stand here for Gil Scott-Heron, another Chicagoan who has published good literature (his novel Vulture, for example), but is known mainly for his work in other media, in this case music, or Melvin Van Peebles, who wrote—originally in French—the wonderfully odd novel A Bear for the F.B.I., but is known more for his work in film. 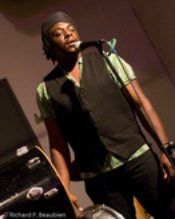 Even more recent are the slam and performance poets.  Slam champion Regie Gibson says “Mama Maria McCray was the first person to let me on the mic (she’s been regretting it every since).”  McCray still reads in Chicago’s extraordinary performance and slam community.   This community—represented in this collection by Tate, Jess, Gibson, Green, Betts, and Shannon—was deeply influenced by the ever-present Haki Madhubuti; and Rohan Preston, Michael Warr, Quarysh Ali Lansana, Elizabeth Alexander, even Sam Greenlee, and many others have been greatly nourished by, or come directly out of it.  My list of regrets is particularly long here, and includes the fine work of poets Patricia Smith, Kent Foreman, Chuck Perkins, Calvin Glaze, Joffre Stewart, Tina Howell, Sharon Powell, Keith Kelley, Michael Witcher (co-founder of Chicago’s legendary Funky Wordsmyths poetry-jazz band), and many, many others.

Sermons and speeches are staples of oral traditions extremely important to Black writing and culture, and Chicago is extraordinarily rich in wonderful preachers and speech-making community activists.  Though his words are present in my introduction to Fred Hampton’s selection, Jesse Jackson, for example, has made several classic speeches worthy of inclusion here, particularly the “Our time has come” speech delivered at the 1984 Democratic Convention.

In his important article “The New Voices Sing of Black Cultural Power,” which appeared in the Panorama section of the Chicago Daily News, December 7, 1968, Eugene Perkins attempted to survey the entire arts scene in Chicago, including the visual arts, and music—the founding of the AACM, for example, whose main temple, the Velvet Lounge, at 21st and Indiana, is, as I write, on the verge of being bulldozed to make way for luxury condos.  Among other sites, Perkins mentions OBAC’s Wall of Respect at 43rd and Langley, and Ellis Book Store at 6447 Cottage Grove.  Among the literary/theatrical figures Perkins highlights, are Sigemonde Kharlos Wimberli and Mike Cook, both in the NOMMO list above.  Among those not mentioned anywhere above are James Cunningham, Cecil M. Brown, Val Gray Ward—a dramatist who was known as the “Voice of the Black Writer”—and Harold Johnson, then director of the Stateway Garden Homes and a drama producer and instructor.  Perkins quotes him as saying, “A black theater must be completely controlled by black people and attempt to unmask the aberrations and stereotypes created by the white media.” (3)

As with OBAC, it would be difficult to exaggerate the importance of Haki Madhubuti’s Third World Press, which, like Madhubuti, has been mentioned time and time and time again throughout this volume.  I had, in fact, considered listing the press’ entire catalog, from which several pieces for this anthology were drawn.  Among those closely associated with the press and of much importance to black writing in Chicago are Jacob Carruthers and B.J. Bolden.  Write Third World Press at P.O. Box 19730, Chicago, IL 60619, for a catalog, or reach them on-line at www.thirdworldpressinc.com.   Madhubuti is, at this writing, also assembling the first creative writing program in the country based on Black texts at Chicago State University, an institution of critical importance to Black writing in Chicago, site of the GwendolynBrooksCenter and host of the annual Gwendolyn Brooks Writers Conference.

Though not focused solely on black writing, the Guild Complex, a cross-cultural arts organization, was founded and directed for a decade by Michael Warr, and helped nourish a number of black writers.  Tia Chucha Press, the Guild’s publishing arm, put out several books from which material was used here, and in 1999 released the wonderful anthology Power Lines:  A Decade of Poetry from Chicago’s Guild Complex.

Finally, no one working on Black writing from Chicago can do without the city’s great resources in both texts and personnel.  There is the Chicago Historical Society, of course, but I worked mainly at the Chicago Public Libraries—the Harold Washington, certainly, but especially the Carter G. Woodson Regional Library on 95th and Halstead, which houses the remarkable Vivian G. Harsh Research Collection of Afro-American History and Literature. Thanks to the Harsh’s indefatigable curators Robert Miller and Michael Flug.

♦ Go to the main page for Black Writing from Chicago, where you can also BUY the book.

♦ Go to a list of Black writers on this site.  The Afterword to Black Writing from Chicago adds many important names to this list.