“How the preeminent photographic record of the period eclipsed people of color and shaped the nation’s self-image.”

This is the subtitle of Sarah Boxer’s article “Whitewashing the Great Depression,” which appeared in The Atlantic, December 2020. Read the full article HERE.  (You may have to subscribe at least to the online Atlantic to read it all—which isn’t a bad thing to do anyway.)  The article is part report on three books: Svetlana Alpers’ Walker Evans: Starting from Scratch), Mary Jane Appel’s Russell Lee: A Photographer’s Life and Legacy), and Sarah Hermanson Meister’s Dorothea Lange: Words and Pictures.  Evans, Lee, and Lange were among the most prominent photographers documenting The Great Depression while working for the Farm Security Administration (FSA) and producing some of the most iconic American photos in the process. 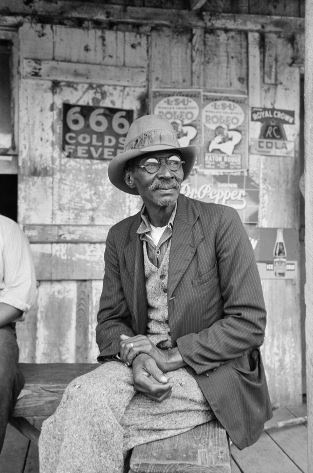 The article’s main message is this: If you look at the roughly 175,000 negatives in the FSA/Office of War Information file, you’ll see that these and a cadre of other talented photographers took plenty of pictures of people of color, but politics got in the way.  The main culprit, at least at first, was their boss, Roy Stryker.  But he’s described as a realist.  “And the reality was that Congress, which controlled the FSA’s funds, was dominated by Southern Democrats, who, as Appel writes in her Lee biographer, were ‘interested in preserving the racial status quo.'”  President Roosevelt feared the Southern Democrats, too, because without them his New Deal programs had little hope of surviving. So, among other things, he wouldn’t back an anti-lynching campaign for fear of losing that base.  “To tug at the Dixiecrats’ heartstrings,” Boxer writes, “Stryker realized that the photographs presented to them had to accentuate white suffering.”  At the time, roughly 90% of the country was white, so under-representing Blacks may have been an attempt at proportional representation. But no group was harder hit than Blacks.  While 25% of whites were unemployed, half of Black Americans were, and they made up more than half of the country’s tenant farmers who were, reports Boxer, “often forced out of work by white ones,” a pattern which held in the North where “whites called for African Americans to be fired from any jobs as long as there were whites out of work.”

Other media also skewed the collective portrait of the Depression’s victims.  Fortune magazine, for example, asked Walker Evans and James Agee for a “record of the daily living and environment of an average white family of tenant farmers,” and when Evans and Agee’s famous Let Us Now Praise Famous Men came out in 1941, pictures of Black Americans were left out.  It took nearly 20 years for some of them to be added back in the book’s second edition.  So Evans, Lange, Lee and many others often flouted orders that Stryker and others gave them.  Lee constantly focused on the downtrodden, giving equal attention to people of color, as did Lange, though FSA leadership instructed her to “focus attention on the plight of white victims” and “to avoid representing instances of interracial sociality.

In sum, Boxer writes, “Although the photographers who worked for the FSA took many pictures of people of color—in the streets, in the fields, out of work—the Great Depression’s main victims, as Americans came to visualize them, were white. And this collective portrait has contributed to the misbegotten idea, still current, that the soul of America, the real American type, is rural and white.”  In this present day where many complain about “cancel culture,” it’s important to say that the point is not to cancel out the hardships white Americans endured but to tell a fuller story about what “the real American type” is.  The “real American type” is more complicated, full of color and difference, and realizing that makes more room for everyone—whites certainly included—to appreciate what we have endured together and to try not to make that endurance harder on others than it already is.

♦ Go to the Diversity Training and Teaching page.