This short article accompanies the release of excerpts from my radio series Voices and Freedoms: A History of Jazz, based on my 1976 book of the same name.  The 16-part series played across the nation for five years in the late 70’s/early 80’ and holds its relevance—or is even more so—today than it was back then.  The excerpts present about 6 to 8 minutes of the original 30-minute broadcasts. The link above takes you to information about the book and our plans to re-release it and provide access to the full-length original shows. Go HERE for a complete list of shows and links to all excerpts, and watch and listen to the Video/Audio below. 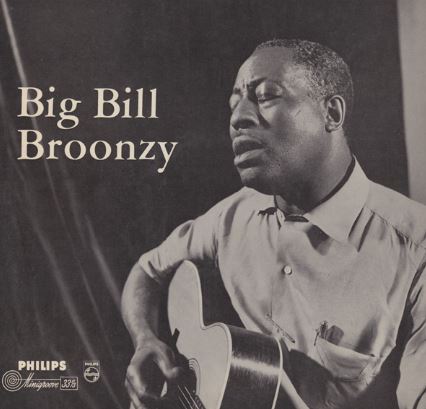 After Emancipation, as blacks sought greater equality, many whites grew more bitter and fearful, and—though slavery was certainly the most extreme form of segregation—segregation throughout the whole of society seemed to begin in earnest.  Legally, it culminated in the 1896 Supreme Court decision in the case of Plessy vs. Ferguson which upheld an 1890 Louisiana law requiring railroads to provide “separate but equal” accommodations for white and black passengers.  The Court said that recognition of color differences had “no tendency to destroy legal equality,” that the Fourteenth Amendment was not intended to enforce “social, as distinguished from political, equality or a commingling of the races upon terms unsatisfactory to either,” and that if the enforced segregation “stamps the colored race with the badge of inferiority,” it is solely because “the colored race chooses to put that construction upon it.”  Justice John M. Harlan cast the lone dissent, thereby presaging by nearly sixty years the Court’s 1954 decision in the case of Brown vs. Board of Education, Topeka. 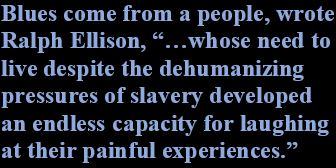 status, a great burgeoning of blues occurred.  Born and bred in the South, it flowed northward in a migratory pattern that is a study in itself.

Show Number Three of Voices and Freedoms looks at blues in three ways: As a tone of voice, as a musical form, and as an attitude towards life born out of a need to survive in an increasingly segregated society.  This excerpt touches on all three.

The blues actually does deserve to be called, as it often has been, a “secular spiritual.” It was a unique and powerful blend speaking about tragedy and comedy at the same time.  Blues came from a people who for hundreds of years, says Ralph Ellison, “…could not celebrate birth or dignify death and whose need to live despite the dehumanizing pressures of slavery developed an endless capacity for laughing at their painful experiences.”  He calls the blues a technique for survival (read more about that HERE). Spiritual people often labeled the blues “devil music,” but actually both helped Blacks survive, the spirituals in their way, the blues in theirs.

♦ Go to the Training and Teaching Diversity main page.