This post is part of a series consisting of excerpts from a journal I keep reflecting on loss, healing, change, and other adventures, usually during the few summer weeks I spend in Sedona, AZ.  Links to the LEAD POST and to Emmanuel House—an organization started by Rick and Desiree Guzman as a living memorial to Bryan Emmanuel Guzman (1985-2006)—are at the bottom of this page.

August 2
I got yawny a few times, but on the whole this was another relaxing trip to Sedona. 1650 miles, two long days. About the middle of the first the car’s AC began acting up, staying cold, but cycling on and off, on and off, at 5-7 second intervals. The next day, however, it just seemed to return to normal the further away we got from Oklahoma’s high 90’s heat with indexes as high as 107.

I got to Sedona about 6:45 on July 31st. With plenty of light left, I decided to pass up our place again and go straight to Bryan’s mountain. The monsoon had hit and heavy rains had fallen for several days. At church on the 1st I found that it had not rained since April, and everyone was rejoicing despite the “humidity.”

The parking lots were jammed. I circled three or four times before finding a spot. The way up to Bryan’s tree was dotted with large puddles, and I found myself tip-toeing around lots of muddy places. When I got to the tree I sat down and sent this text to Linda, Daniel, Rick, Aaron, Josh, Mike, Kari, Desiree, Shannon, Katie, Karen, and Joe: “Another year & I am once again on Bryan’s mountain. Distant peaks are wreathed in clouds & the earth is bright red with a recent rain. Dozens of people play up here in the cool evening. Am sitting by his tree watching & thinking of you all. Love – R” 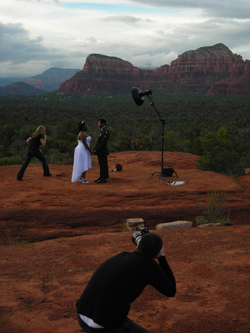 I came down sooner on July 31st because I saw a bride and groom having wedding pictures taken on the mountain’s first tier down below. The photographer and his assistant had set a big backlight on a tall stand and were snapping away. “I know I keep saying, ‘Just one more,’” the photographer said, “but taking pictures up here is addicting.” I got closer and took a few of my own. The couple was black, and he was in the army. I wished them well and headed down the mountain.

In the parking lot a black SUV drove by and a man stuck his head out and asked me if I could take a picture. “We’ll just all hang out of it,” he said, then drove a few yards down to position the van in front of a mountain. “Don’t go far!” his wife said, but I replied it was ok because, “I live here.” On 3, five people popped out of their respective windows and doors, but instead of looking at me got to shouting, “Mazel tov, mazel tov, mazel tov!” waving wildly to the bride and groom who had now come down the mountain to rejoin their family. One of the things I remember most is Aaron saying, “It’s not a sad place. It’s not a lonely place,” when we climbed up to Bryan’s tree a couple of years ago.

No, it isn’t lonely. Many times it’s not even quiet. It’s not just that there always seem to be people climbing around. Planes and helicopters fly by all the time, and you see and hear all the traffic from Hwy 179 snaking below. Today I heard a loud pop and the thumping of a shattered tire, then saw the car far below. The thumping got louder until the driver just seemed to shut down everything and the car coasted down into the Village of Oak Creek.

At the same time, alongside the hubbub, stillness and quietness do persist. On the way back down I stopped at pools of water left by this week’s monsoons and tried to take pictures of the mountains with their reflections upside down in those pools.

August 10
This year my strongest memories come not on the mountain but on the patio at night. Maybe it’s because there are more lights now, but the sky, though still gorgeous, doesn’t seem as bright as the night Bryan and I sat out there and he kept saying, “It’s crazy we have a place here! Crazy!” Or is it getting too familiar? I don’t mean I ever get tired of looking at that sky, or being on the mountain, or taking that drive into town—but the familiarity is a little disorienting. I have found myself saying almost out loud to myself things like, “I sat here with my son Bryan looking at this sky. And now my son is dead.” Sitting by his tree, I look back towards the looming mountain and say, “Bryan sat on that outcropping of rock just up there, and Mike took a picture of him. He saw all this beauty. And now he’s dead.” I still see some of his ashes on the ground underneath his tree, cradled by pine needles and agave leaves. I still say, “There’s your tree, Bry,” or, when I leave, “Let’s go, Bry. We’ll be back soon.” But I say those other things, too, perhaps to remind me that his death is as real as the ways I have begun to adjust to it, to become familiar with it.

— Go to main pages for Sedona or for Emmanuel —
In 2016 Emmanuel House was named one of the “Top 100” social change organizations in the world.

One Response to Climbing Bryan’s Mountain, 2010